15 May 2017 - Published by Paul Stephens
The GWCT is leading an exciting new project called PARTRIDGE, part-funded by EU’s North Sea Region Interreg programme, aiming to show how best to restore farmland wildlife based on tailored management for the Grey Partridge.

This is taking place at ten demonstration sites across Scotland, England, Netherlands, Belgium and Germany, where each site is improving the quantity and quality of habitat for Grey Partridges, and implementing other measures such as the exclusion of potential nest predators and the provision of supplementary food. We hope to use this platform to influence agricultural policy and in particular the support mechanisms available to help farmers implement wildlife-friendly measures on their land in Scotland, and also right across the EU.

One of the Scottish demonstrations sites, Balgonie Estate in Fife, has no recent history of supplementary feeding, so this was a measure we were very keen to introduce here. The site has a fledgling population of Grey Partridges of about 4.5 pairs/100ha and we hope that by providing additional winter food – especially crucial during the late winter period when most other sources of food are exhausted, we can help more birds survive the winter and increase breeding numbers (download detailed Guidelines on winter feeding here).

The new feeders, 20 in all, were put out in mid-March and stocked with wheat kindly provided by the estate. We put the feeders in some of the cover crops that have been planted for the Grey Partridge as we know the birds are using these areas, and they were then monitored frequently to start with to ensure they didn’t empty. The feeders were also moved 10-20m each fortnight or so to help prevent rats accumulating around the fed areas – this does not seem to have been a problem so far at Balgonie.

Our observations show that the Greys – and many other species – are already using the feeders and next autumn we hope to more than double the number of feeders to increase the number of birds we can benefit around the estate. 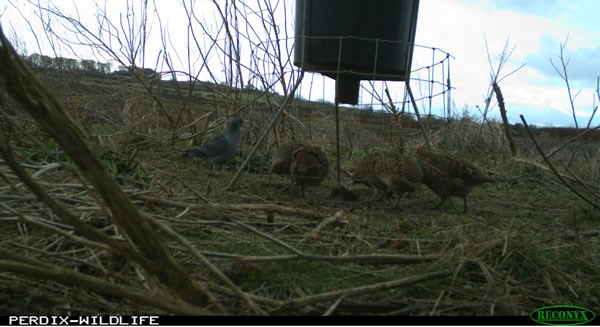