Following on from the previous blog in December, our German project partner Georg-August-University, successfully tested a new seed mixture to be sown in autumn. It consists mainly of native, hardy herbs and wild flowers, like corn poppy and yarrow (Table 1).

The regular “PARTRIDGE-Mix” is designed for spring sowing and predominantly contains cultivars like sunflower and flax. With farmers at the Diemarden and Nesselroden demo sites having difficulties working on the clay fields in the spring and insects such as wild bees having very specific requirements, a new autumn-sown mix was created. The new mix consists of a variety of native wild flowers that will attract specialist insects.

Another important feature of the new mix is the early germination and establishment of first rosettes in autumn. The last of the vegetation blooms in late spring and therefore should provide excellent nesting cover, ready for breeding partridges in the mix’s first year. The newly established flower blocks have a well-structured vegetation, that should provide insect-rich food, cover and shelter for partridges and many other farmland birds.

Both the “PARTRIDGE-Mix” and the new autumn mix have their individual advantages. The regular PARTRIDGE-Mix blooms later in the summer and should provide insect-rich food when the autumn-mix has started to fade. Overwintering birds can also benefit from the seed provided in the PARTRIDGE-Mix, such as sunflower, buckwheat and cereal. Currently the autumn seed mix seems unsuitable for plots which have been previously fallow. This could be due to the low sowing density, making it difficult for the wild flowers to compete against weeds. Therefore, we recommend a manager plants both mixes to optimise the benefits of high quality habitat all year around.

While the new autumn-sown and spring-sown plots differ in some respects, they are similar in the fact they both attract a lot of farmland bird species, insects and small mammals. And with the bright colours of blue, red and yellow, especially the autumn mix, they are a pleasure for the eyes. Many delighted visitors are taking one selfie after the other in front of the flower blocks. 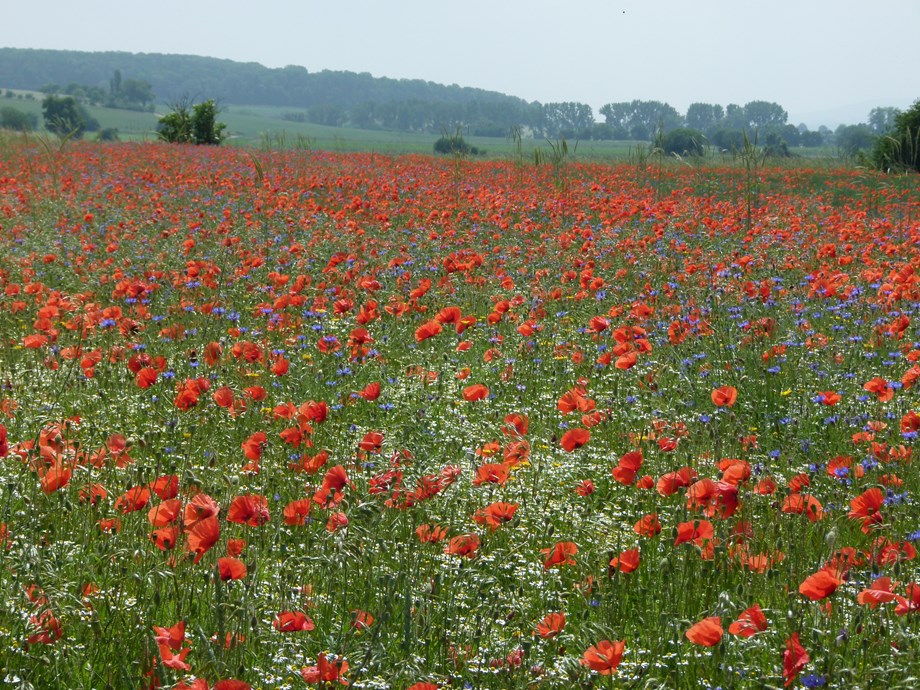