16 July 2018 - Published by Paul Stephens
Last weekend, on the 7th July, local hunting groups and some Flemish hunters actively involved in projects working for partridges across the country, attended a farm walk at the Ramskapelle PARTRIDGE demonstration site in Belgium.

Ramskapelle is one of the ten 500ha demonstration sites across five countries within the four-year PARTRIDGE project. At all demo-sites at least 7% of high quality habitat has been implemented, including one of the key habitat measures, PARTRIDGE flower mixes. The habitat measures are tailored towards the grey partridge from which other farmland wildlife also benefit.

Eric, a hunter and farmer in the Ramskapelle demo area, is one of many enthusiastic people about the new PARTRIDGE flower blocks. He said “The PARTRIDGE mix offers a lot more cover compared to the original wild bird seed mixes available in Belgium. We see that the wildlife uses these flower blocks a lot. ”The flower blocks he established look beautiful, especially where the mix was sown in soil that was ploughed before winter". In both Flemish demo-areas of the PARTRIDGE project, farmers took the opportunity to test this measure under a VLM environmental scheme. They have sown across both demo areas, a total of 30 hectares of PARTRIDGE flower blocks. The PARTRIDGE mix contains a diverse range of species including kale, cereals and wild flowers. One year after sowing, half of the parcel is ploughed and re-sown. The two-year mixture provides an abundance of both summer and winter food as well as nesting habitat.

The two other new measures that have been tested in the area are beetle banks and small groups of low shrubs. In Flanders, a farmer constructed the first beetle bank this spring. In the Netherlands, where the first beetle bank was constructed a year earlier, the results are very promising. On the previously established beetle banks there are large numbers of insects present. This important habitat measure provides protein-rich food for partridge chicks and a range of other farmland birds. The hunters present at the field excursion see a lot of added value in the shrub groups which are planted in the area. In the ‘polder’ region, the lack of sufficient winter cover is an issue for wildlife, making ground-nesting birds like the partridge vulnerable to predation. 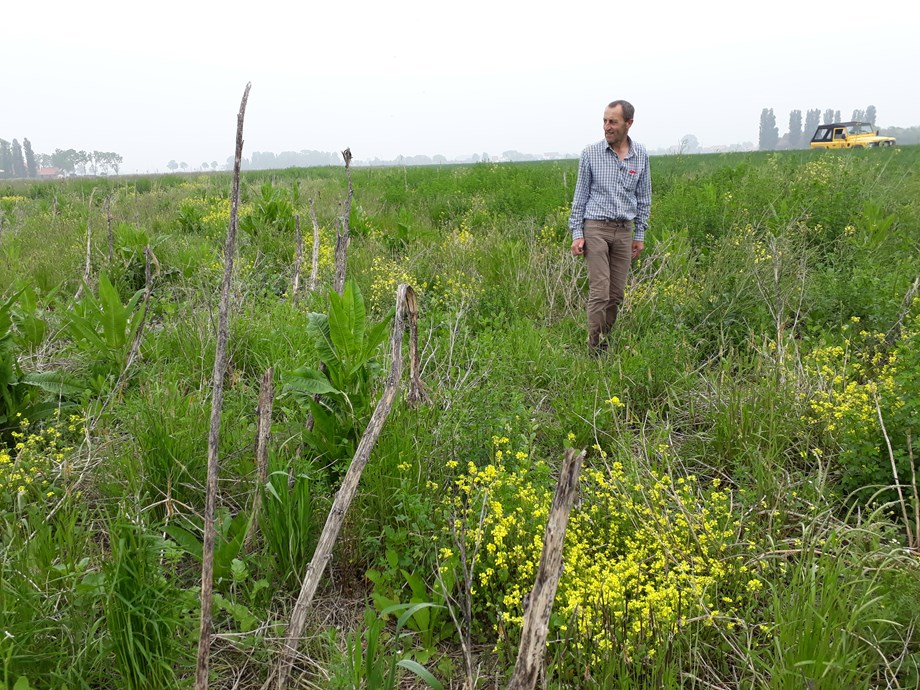 The local hunters provide winter food for partridges using feed hoppers and carry out legal predator management. In the PARTRIDGE project, the Belgian hunters tested a new type of feeder which was placed within a frame of corrugated iron. The mesh size of this frame should be at least 15 cm x 15 cm. Kristof, one of the hunters trialing this type of feeder said: “We found that wood pigeons rarely use these feeders, while the frame doesn’t deter pheasants at all. The camera trap placed at one of the feeders demonstrates to us which species are taking advantage of the available food.”

Keen hunting groups even took their own initiative, working in collaboration with farmers or on property, by implementing extra habitat measures for the grey partridge. They sowed wild-bird mixes and planted shrubs. One of the measures we visited during the field excursion is a field with summer barley, where maize was under-sown afterwards. “Last year, this measure was taken up almost accidentally”, the gamekeepers Ronny and Luc explained. “A maize crop seemed to fail because of the dry weather, so we decided to sow summer barley instead. However, after some rain the maize also began to grow. We left the plot on the field over winter. It was a real success, not only providing food for farmland birds but also cover in late winter. So, this year we established this measure on some parcels deliberately.”

On-going monitoring is currently aiming to demonstrate that these measures are successful in reversing the decline of grey partridges as well as increasing other farmland wildlife, with results looking promising so far. The PARTRIDGE project aims to inspire a range of people including farmers, hunters, local stakeholders and policy makers. In the second year, the project has already influenced agri-environment schemes in the Netherlands and aims to bring this success across the border to Belgium. Hence PARTRIDGE influences agricultural policy and environmental schemes which work optimally for farmland birds across the whole project area.