Launch of the PARTRIDGE PROJECT in Belgium

08 September 2017 - Published by Paul Stephens
The Game & Wildlife Conservation Trust (GWCT)-led PARTRIDGE Project was officially launched at one of its two Belgian sites on 31st August.

The 'PARTRIDGE' research project (Protecting the Area’s Resources Through Researched Innovative Demonstration of Good Examples) is an initiative, spearheaded by GWCT, which looks at how new management solutions can improve biodiversity and ecosystem services by up to 30% and involves co-operation across Europe.

PARTRIDGE is a close partnership between Birdlife Netherlands, the Georg August University in Germany, the Flemish Land Agency (VLM) and the Research Institute for Nature and Forest in Belgium (INBO), the Flemish Hunters Association and regional farm and conservation advisory organisations, local farmers and hunters.

Dr Francis Buner, head of the PARTRIDGE project and senior conservation scientist at GWCT, explained the aims and objectives of the project to the assembled crowd which was joined by the Flemish Minister of Environment, Nature and Agriculture, Joke Schauvliege.  In her speech, Minister Schauvliege expressed her enthusiasm about the cooperation and integrated approach between the different European project partners and the opportunities that this has created in order to achieve good results in the field. 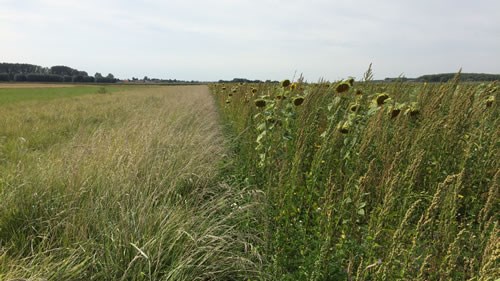 The Göttinger mix (right), here in combination with a grass margin (left), is one of the experimental measurements that the PARTRIDGE project uses to stimulate the grey partridge and other farmland wildlife at its demonstration sites in Belgium and across the North Sea region.

After the speeches, there was a visit to one of the two demonstration sites within the 'PARTRIDGE' project. During the field visit, the public received more information about the agri-environmental schemes and experimental measures being taken. One of those measures, the Göttinger flower mix, was the star of the site visit. Together, with the local farmers, this high-quality habitat measure will be tested and evaluated over the next few years. 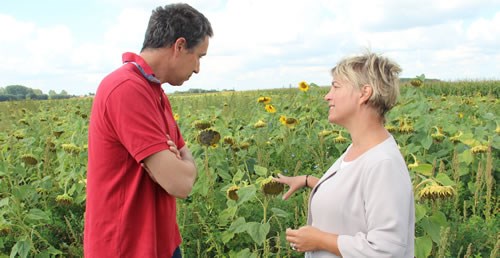 Minister Joke Schauvliege talking to farmer Tom Gillis, who has sown a plot of the Göttinger mix to improve farmland biodiversity on his land.