In pursuit of the Easter hare

01 April 2021 - Published by Francis Buner
The sunny spring weather is finally here, and warm days sat working out in the garden are just around the corner! For many, this a welcome escape from the long winter nights hiding at home, snuggling on the sofa and keeping warm.

But here at the PARTRIDGE project this change marks the end of some of our favourite surveys. The cold, dark nights have been no excuse to stop surveying! Instead of staying home in the warmth, each team has been piling on the layers and heading out into the night. ‘Why?’ you may ask? Because winter is the perfect time of year to conduct hare count surveys! If we had waited until spring when crops and their surrounding habitats reach a higher level of growth, it would be much more difficult to spot any wildlife and wouldn’t make for a very informative survey. 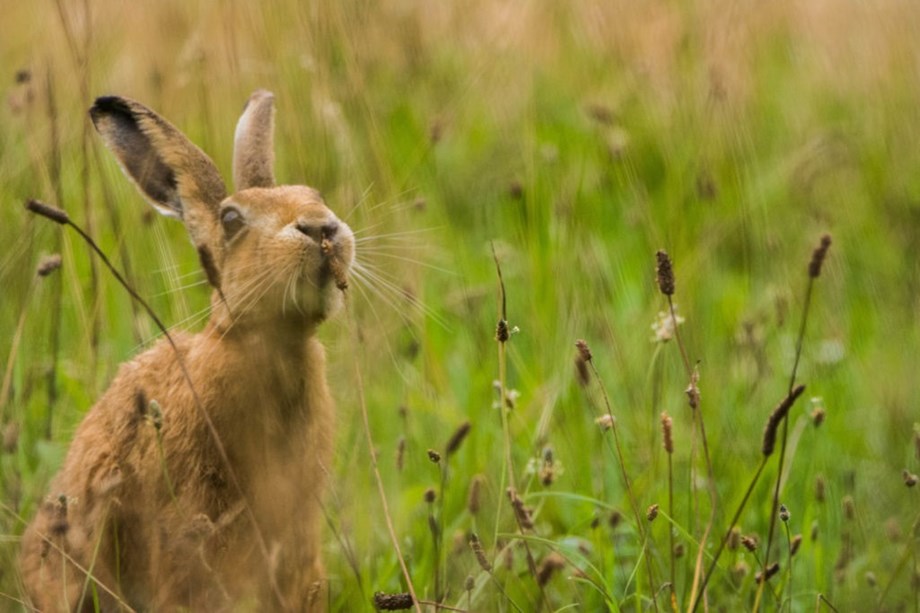 We conduct hare counts as part of the PARTRIDGE project as they are an informative – yet easily replicable - method of surveying not only brown hares, but also many other species of wildlife. As you may be aware, one of our overall project aims is to increase biodiversity levels at our demonstration sites by at least 30% by the end of the project. But we need a way to measure these changes from year to year. Biodiversity indicator species (such as the brown hare), and their complementing surveys, were therefore chosen to allow the project to track these changes. By carrying out hare counts at each demonstration site, alongside their reference site counterparts (which help act as a control measure to allow for any annual fluctuations) we can see how our implemented measures are affecting biodiversity in real-time.

One of the simplest and most easily replicable survey methods is lamping. This involves using large spotlights to spot the eyeshine of animals when it is pitch black. Many often associate this practice with hunting and/or shooting, but it is actually a common and effective survey method used in conservation. To allow for maximum observations, counting sessions are conducted in a vehicle, with at least one spotlight covering each side of the car. Spotlights are held out of the vehicle windows and sweep the surrounding habitat as transects of roughly 800m-1.5km are slowly driven. The number of transects at each site can vary, but a minimum total length of all transects at every site is 5km - this ensures that the majority of the site area is covered during each count session. These sessions are then repeated till 4 have been completed at each site. 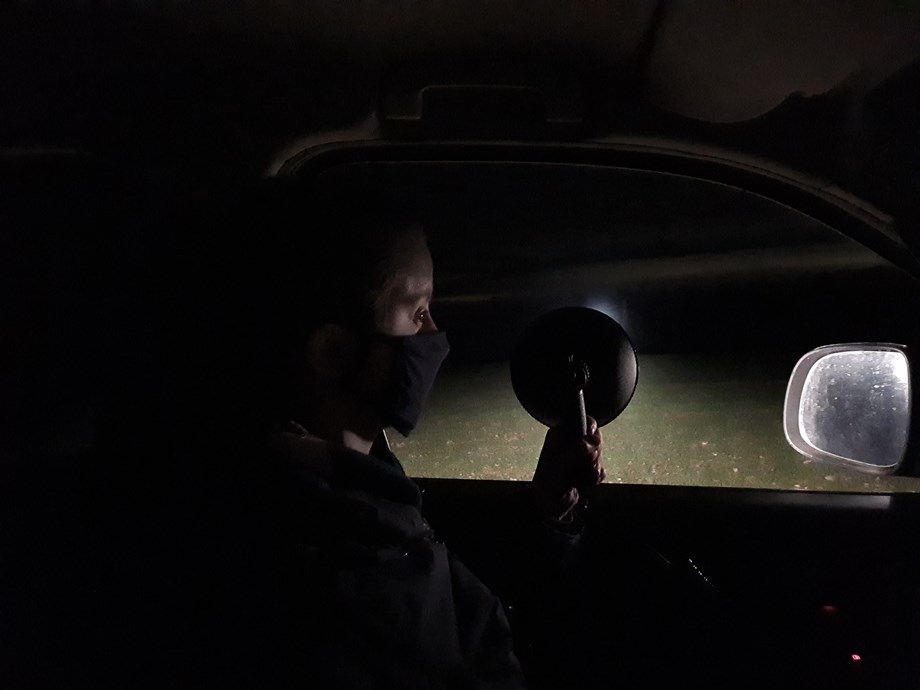 Despite current COVID-19 regulations, hare counts were still possible to carry out this winter. We have been careful to ensure the safety of our staff by following all guidelines – ensuring masks are worn at all times, safe distances maintained, and appropriate ventilation provided (aka the windows are all down and it can get very cold!) 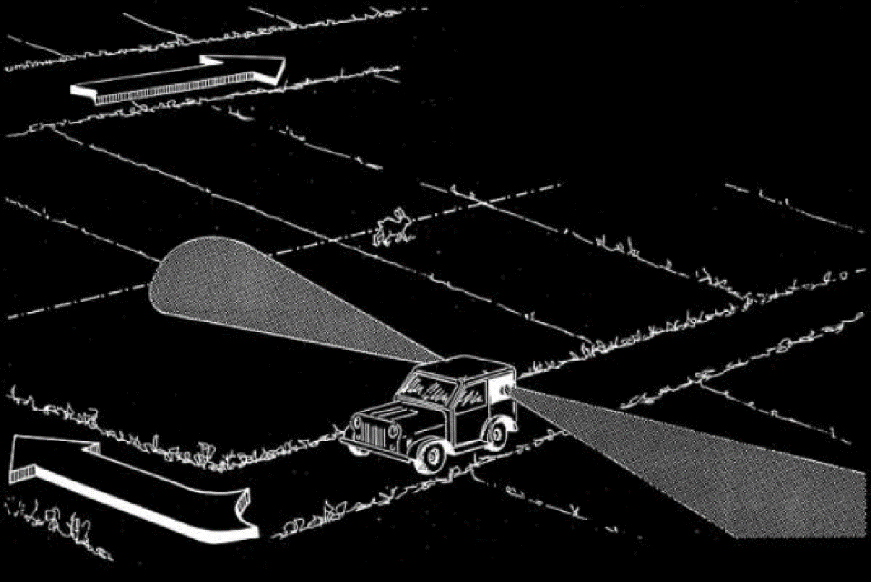 Due to it being pitch black, it can often be difficult to identify different species when all you are able to see is their eye shine. Therefore, you have to be pretty clued up into how the eyeshine of each species looks! Some of the most common species seen include of course brown hares, which possess a pink/red looking eyeshine. These can be easily confused with a European rabbit which is also a pink/red colour - despite their clear differences when seen in the day, the best way to separate the two at night is by looking at how they move. Hares possess a much smoother movement than rabbits, which typically move in hops. Other colours of eyeshine you may see are bright white – a clear indicator you’re being carefully assessed by a roe deer. Or you may even spot a stunning amber/ yellow set of eyes staring back at you – the signature sign of a red fox. 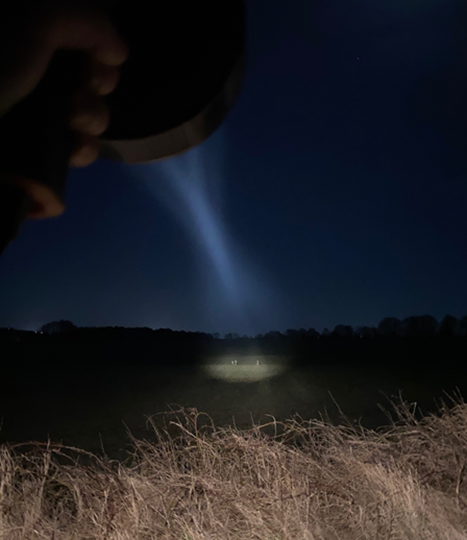 This season has been extremely cold and wet making driving conditions treacherous. Especially when you have to drive an open sided Kubota buggy, mud splashing you every 30 seconds and driving 20mph! This means our counts can take up to 5hrs. All this alongside trudging through thick mud to open heavy gates and delving into puddles in search of dropped keys, all I can say WHAT AN EXPERIENCE!

Despite all this, the rewards definitely outweigh the downfalls. Not only have we seen over 100 hares in a single night, but also a whole host of other species in which the night is their playground. In England we have seen woodcock, rats, foxes, little owls, long eared owls, tawny owls, barn owls, grey partridges, red-legged partridges, roe deer and mice. Despite its name, the long-eared owl does not actually possess large ears. The tufts on their head, which many often mistake for ears, are actually a feature used to make them look bigger and more intimidating to their most frequent competitor, the tawny owl.

One other great spot was of a Leveret (a young hare), which is abnormal for this time of year due to the cold weather.

It’s not all fun wildlife spotting though. Due to the nature of our survey methods, we can sometimes look rather suspicious to members of the public, but it was still a bit of a shock when we had the police turn up one time whilst we were surveying! We found the best way to deal with the situation is stay calm and explain what we were doing. Once everything was all cleared up, we were on our way again with a little more adrenaline running through our veins! 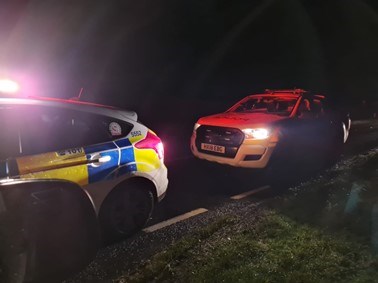 Under suspicion - Photo by Ellie Raynor

Despite the cold, hare surveys are always a lot of fun, and you often shine your spotlight upon some fantastic wildlife interactions! A personal favourite of mine was spotting a young rabbit hopping around, minding its own business before catching sight of a pair of bright yellow eyes crouched in the grass behind it ready to pounce. It’s safe to say the fox wasn’t best impressed by our intrusion!

Aside from the more common spots of hare, roe deer and rabbits, you also have the opportunity to see a huge array of wildlife. So far this year one of our rarer spots has been a grey heron. Not an uncommon bird but definitely a sight to watch as it glides past you in the night! 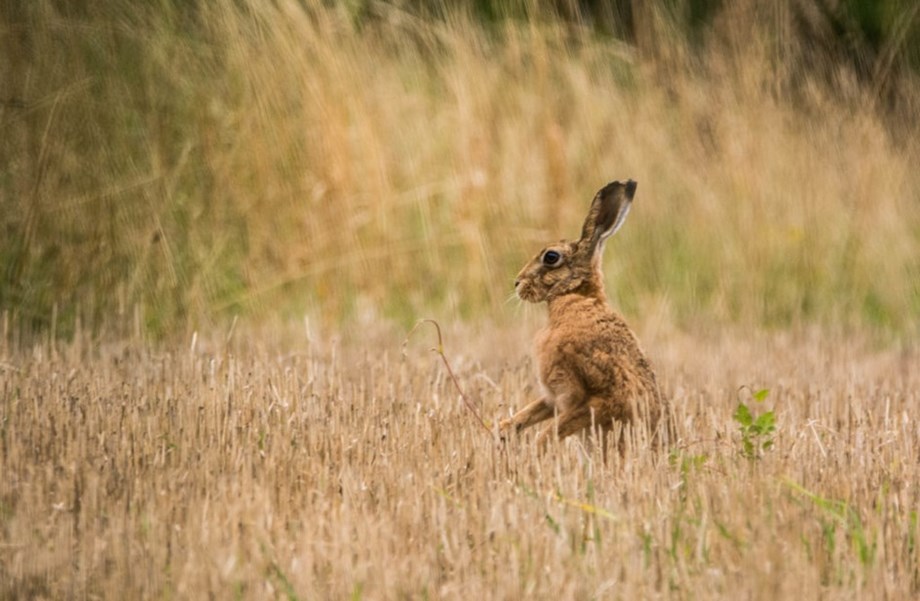 On the lookout - Photo by Sam McCready

Hopefully this blog has helped to shed some light on why we conduct hare surveys, and how we’re not actually mad for staying out on cold winter nights - the safari-esque experience is worth it, trust us!