02 August 2017 - Published by Paul Stephens
The polders of Ramskapelle is one of the two Belgium project areas in the North Sea Region interreg project PARTRIDGE.

This four-year project (2017-2020) aims to demonstrate how optimal grey partridge management can be combined with profitable farming.

At ten 500 ha farmland demonstration sites across England, Scotland, the Netherlands, Germany and Belgium, a minimum of 7% high quality habitat tailored to grey partridges are being implemented, alongside supplementary winter feeding and legal predator management where possible and desired. The combination of these measures is expected to increase farmland biodiversity by 30% by 2020 at each of the ten sites.

Based on international knowledge and experience one of the key aims of the PARTRIDGE project is to develop and trial improved and new partridge habitat measures to deliver the predicted overall farmland wildlife benefits.

In Belgium, existing environmental scheme contracts between the Flemish Land Agency (VLM) and the Ramskapelle project farmers - mainly for grass margins - form the baseline towards the 7% habitat target. However, the habitat measure which delivers the highest benefits for partridges are wild bird seed mixes or wildflower mixes that provide cover during the breeding season and winter, as well as insect-rich habitat for the partridge chicks.

Suitable wild bird seed mixes will be one of the focus measurements in the Ramskapelle demo area. Additionnaly,  farmers are encouraged to make contracts for planting small groups of shrubs  and to install beetle banks.

At Ramskapelle, two enthusiastic hunter-farmers have started to trial two hectares of a new PARTRIDGE wild bird mix, inspired by a well-tested mix from Lower Saxony, Germany. This mix contains species such as buckwheat, linseed, lucerne, sunflowers, kale, different cereal species and perennial chicory. Two hunting groups are further testing one hectare of a second PARTRIDGE mix, developed by the Game and Wildlife Conservation Trust and Oakbank in England, which, unlike the German mix, works better when fertilized.

Adjacent to the demonstration area in Ramskapelle, a hunting group could, at their own costs and in agreement with the local farmers, sow two long strips with a further variant of the German-inspired PARTRIDGE mix. Alongside one of them, the group will sow a strip with ‘Switchgrass’, a species used as an energy crop by farmers which is expected to provide additional winter cover.

A wheat plot and a barley plot were sown and will be left over winter to provide food for farmland birds. 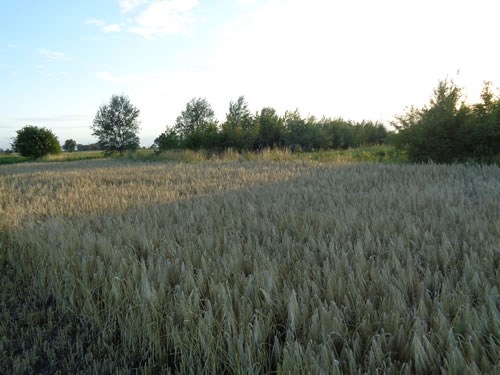