11 June 2019 - Published by Paul Stephens
On 6th June, a delegation of VLM staff (Flemish Land Agency) visited the PARTRIDGE demo area of Ramskapelle in Belgium. The group consisted of the key people responsible for policy preparing (CAP, Pillar II and local legislation), executing AEMs (advisors, administrators) and the people taking the lead in the control of the agri-environmental measures under Pillar II. Also, it provided an opportunity to discuss with the inspectors how they organize that control.

Currently, the PARTRIDGE project is mid-way, with all the measures in place, and the biodiversity carefully monitored. The farm walk was led by Bram Conings, VLM’s advisor in the Ramskapelle demo area and began with a short background introduction by Frank Stubbe, VLM’s PARTRIDGE project lead coordinator for Belgium. Stubbe spoke about the results the project had already achieved, such as successfully implementing over 14 % wildlife friendly habitat across the site. In the name of VLM, he then went on to say “The efforts we are making work for farmland biodiversity. We can feel and see that, we are convinced. However, we still need to influence a lot of people; we’ve made a few steps up the ladder, but we are still a long way from the top”.

The staff were then led into the fields as a marsh harrier circled overhead and, over the enchanting song of the skylarks, a discussion began about the added value the measures bring to the area.

The experience we developed with PARTRIDGE about improved seed mixtures and the most appropriate maintenance of the implemented habitat measures were discussed and disseminated across all VLM advisors. In response to the concerns of some local farmers we reduced the percentage of teasel within the seed mixtures (the teasels had become too dominant in some plots) which still resulted in well-structured vegetation, providing essential food, cover and shelter for farmland birds.It was clear to all that this year´s newly sown seed mixtures worked (as well as those that are now in their 2nd year); above us the skies were alive with songbirds and insects and from below we were greeted by the soft hum of the diligent bumblebees harvesting pollen. 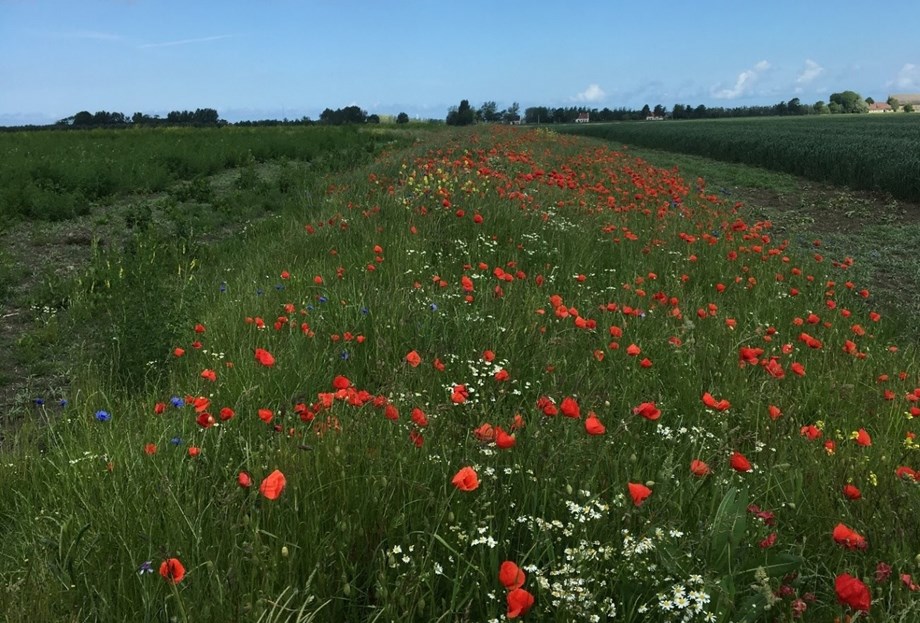 The first Belgian beetle bank that was installed in 2018 and that had suffered from last year’s drought, has since been re-sown and is now showing a promising diversity of flowers; a stunning sea of poppies, chamomile and cornflowers. However, the VLM staff were not aware of the struggle the project had when trying to implement this valuable measure and it was agreed that if we want to roll beetle banks across Flanders, the mandatory permit should not be required.

The sight of a feeder in one of the measures also sparked another discussion. The overall opinion was that feeders are only necessary during the hungry gap in the winter, not during the summer and not in the measures. The discussion was followed by suggestions on how to deal with this issue.

After seeing the coverage of the measures, admiring the plots themselves and to hear and see local biodiversity, everyone was convinced that the measures are delivering what they are intended for: an increase in farmland biodiversity. Now we simply need to prove it. Furthermore, the consensus was that more projects like PARTRIDGE are needed to conquer biodiversity decline, and that we need to roll-out a framework to disseminate this approach. Still a lot of work to do, but today was a good start.