A EUROPEAN project that strives to increase the grey partridge population through high levels of biodiversity has received a three-year extension.

PARTRIDGE (Protecting the Area’s Resources Through Researched Innovative Demonstration of Good Examples) was formed in 2016 to determine a 30% increase in biodiversity at 10 European demonstration sites.

These sites provide new and improved methods for the long-term sustainable management of farmland ecosystems that can be applied to national agri-environment schemes across European borders.

Led by the Game & Wildlife Conservation Trust (GWCT), the project received funding from the North Sea Region Interreg Programme until 2020 – but has now been extended until 2023.

GWCT’s Dr Francis Buner, a senior conservation scientist who is head of PARTRIDGE, is delighted by the news.

He said: “The aim of PARTRIDGE to demonstrate a 30% increase in biodiversity at our 10 demonstration sites over a four-year period has been ambitious!”

“Our 7% implemented habitat measures needed two years to be installed and another year to grow to fulfil their full potential.

“This extension gives us more time to demonstrate that our measures work so our scientific research can be used to influence policy-makers on future agri-environment schemes.” 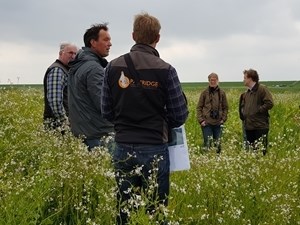 PARTRIDGE is a close partnership between Birdlife Netherlands, the Georg August University in Germany, the Flemish Land Agency (VLM) and the Research Institute for Nature and Forest in Belgium (INBO), the Flemish Hunters Association and regional farm and conservation advisory organisations, local farmers and hunters.

The project has showcased best practice models at ten 500 ha farmland demonstration sites in five countries; England, Scotland, Netherlands, Germany and Belgium. There are also plans to expand in Denmark and Sweden.

Sarah Holsen, project advisor for the North Sea Region Interreg Programme, said: “The PARTRIDGE project demonstrates how the conservation of birds and insects on farmland can be achieved by getting farmers, hunters, conservationists, and politicians involved – together.

“We are proud to fund the continuation of such a project, especially in light of the European farmland biodiversity decline and recent calls to action to safeguard the natural world.”