05 September 2017 - Published by Paul Stephens
PARTRIDGE started in the end of 2016. The goal of the four year (2017-2020) project is to demonstrate that modern agriculture and biodiversity go hand in hand. At least 7% optimal habitat will be created in ten demonstration sites of 500 ha, spread over England, Scotland, Germany, Belgium and the Netherland. One of the objectives is to increase the biodiversity in the demonstration sites with at least 30%.

Where did they go?

May till July are always doubtful months for everyone who works in protection of the partridge. The “shy” birds barely show themselves, because they are breeding or looking for protection with their chicks (see picture below). You wonder: “Where did they go?”. But on many places where wheat is harvested, the ‘Greys’ become visible again. Partridge-participants report coveys on their land or on fieldtracks during their work. Bird-watchers see groups during hikes or bike trips on and along the road and local residents report them even in their backyard. Especially observations of groups of adults with young (coveys) are important. Because all of these observations are imported on Observado.org, we have useful reference data.

Coveys in the demonstration sites

In the area Land van Heusden en Altena 107 observations were recorded from June till August 2017. This involved 48 observations of 1 to 3 individuals and 59 observations of 4 or more individuals. The biggest group was spotted by Jan Noorloos and consisted of 17 partridges: 3 adults and 14 young. The Dutch demonstration site Oude Doorn is 525 ha and is situated in the region of Brabant in Land van Heusden en Altena. After clustering of the observations, 9 different coveys were present. With these 9 successful nests are on average 7.1 young observed. On the reference site Gerndere 2 successful nests with on average 4 young per nest were observed. In the second Dutch demonstration site Burgh-Sluis 3 coveys are observed. A fourth group with 11 young are situated just outside this demonstration site.

In the site Oude Doorn it is clear that the most successful nests are in or close to the habitat improvements (see map and pictures below). In the autumn is will become clear if these field margins, beetlebanks and flowerblocks contributed to a better survival of the chicks. 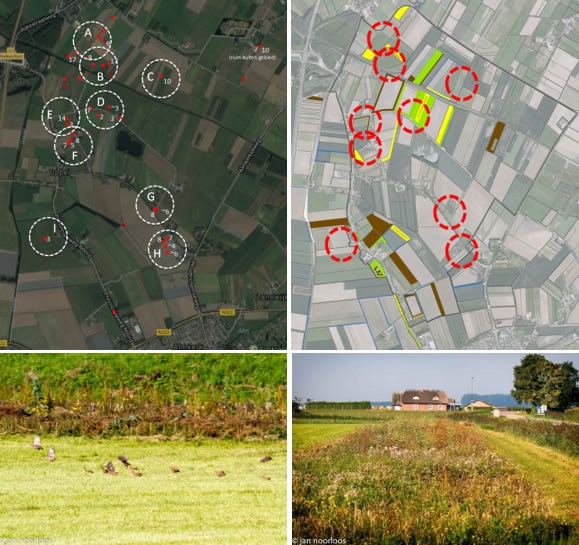 Chance for observation and spread

Nature Conservation Association Altenatuur already keeps an eye on the partridge for a while. In the last 5 years around 1.350 observations are collected of 5.780 partridges. This way of counting by volunteers paved the road for this European project. The observations are not evenly spread over Land van Heusden en Altena.  Not many partridges have been seen in the large-scale monoculture areas. While the small-scale areas with more variation in crops and smaller plots consist of the highest number of partridges. Often you can find here also smaller hobby-meadows, big gardens, uncultivated land, wide roadsides or a nature strip. Especially the variety will keep the partridge. The observations are not spread equally over the year. Most of the birds are seen and heard in April and May. In this period are particularly the males active and visible. The summer is breeding time and consist of enough cover and the number of observations strongly decreases. 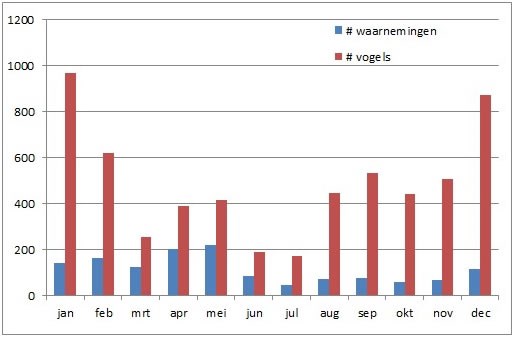 The collected observations of the last year have an extra value. They form comparison material for the monitoring data of the PARTRIDGE-project. We thank all the bird-watchers, farmers, hunters and the local residents who helped with these counting’s. We encourage everyone to keep looking around and always import the partridge observations on Waarneming.nl. With this information we can demonstrate that smart habitat improvements can contribute to the conservations of biodiversity on farmland.