Field trip with Flemish farmers in the Netherlands

Dr Francis Buner (Head of PARTRIDGE) and Jochem Sloothaak (Co-ordinator Brabants Landschap) led through an informative demonstration site visit during which farmers, from the two Flemish PARTRIDGE demonstration areas, were given the opportunity to exchange their knowledge with their Dutch colleagues about the implementation and management of beetle banks as well as their benefits for wildlife and the farm business. 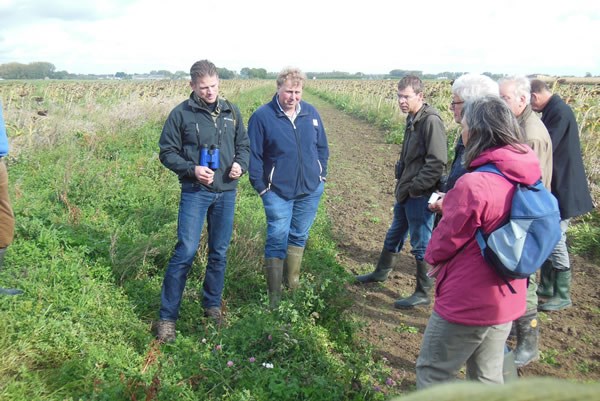 Beetle Banks are plowed-up strips of soil (2-3 m wide and approx. 0.5m high) typically through the middle of arable fields. Beetle banks should be sown with a tussocky grass mixture (added with some native flowers such as Wild Teasel (Dipsacus fullonum). Their value for wildlife can be further improved if small clumps bushes such as Hawthorn (Crataegus leavigata), Dog or Field rose (Rosa canina or arvensis), Privet (Ligustrum vulgare) and Spindle (Euonymus europaea) are planted every 100-200 m along the bank.

Beetle banks are an ideal nesting habitat for partridges, especially when combined with 15m-wide wild bird seed mixes or flower block on either side which provide additional foraging habitat and cover for a wide range of farmland wildlife. They also reduce predation pressure of ground-nesting birds due to their large size. Beetle banks ensure a dry place to nest because of good drainage after heavy rain and suitable wind shelter during the winter months. Beetle banks offer direct benefits to farmers by their provision of suitable habitat for wintering insects, many of which are natural pest controls in the neighboring fields. During the summer months, they additionally provide suitable insect-rich food for grey partridge chicks which entirely depend on insect food during their first two weeks of life. 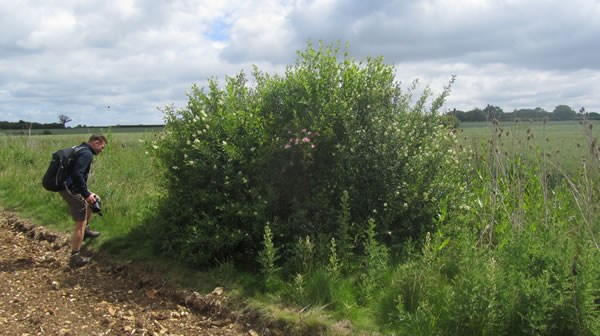 What did we learn during this field visit?

The seed mixture consists of around 80 % native grasses, especially species that form dense tussocks such as Cocksfoot (Dactylis glomerata). A high number of grasses in the seed mixture are important to limit excessive weed pressure and to create an ideal dense habitat for attracting insects.

Beetle banks should be mown during the first year after establishment to ensure the development of a weed-free grass bank. During the following years, no further management is needed, unless problematic weeds such as Creeping thistle (Cirsium arvense) or Broad-leaved dock (Rumex obtusifolius) start to invade the bank. In this case weed-infested areas should be cleared by hand or stock sprayed where allowed. Management should always take place outside the breeding season.

In summary, it was concluded that it is important to build a beetle bank in the right way right from the start and as a result of the event, a handful of Flemish farmers will establish the first beetle banks in Belgium this winter.