As spring has finally arrived, an impressive 32 hectares of our PARTRIDGE flower mixes will be sown across the two Belgian demonstration sites in the coming weeks. All participating farmers gathered in the local pub, where they were given advice on how to best sow and manage the received seed mixes.

These measures are part of the PARTRIDGE strategy where the aim is to increase farmland biodiversity by up to 30% across all 10 demonstration sites in Belgium, England, Scotland, Germany and The Netherlands. This will be achieved by creating 7% of high-quality habitat, targeted towards the grey partridge, in which other farmland wildlife will benefit from. The flower blocks are considered high quality habitat as they provide the partridges with food, shelter and nesting habitat all year round. 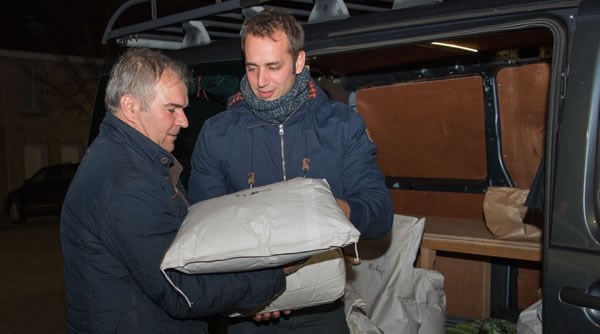 As most of the participating farmers are new to the PARTRIDGE project, they have limited experience with this specific PARTRIDGE seed mix and its management. Therefore, all of the farmers were invited to a casual information evening in the local pub.

During this gathering, the farmers received the PARTRIDGE seed mix together with essential one to one Guideance and advice for the sowing and management of the flower blocks. The newly-involved farmers also got some extra support with tips and tricks from their colleagues that had already sown some PARTRIDGE flower blocks last year.

Driven by a shared enthusiasm for partridge conservation and accompanied by some typical Belgian beverages, the farmers sat down together for the evening. Besides discussing the future of grey partridges on their lands, some of them even formed cooperations for the sowing of the PARTRIDGE flower blocks - making the evening a real success.