21 February 2018 - Published by Paul Stephens
At the beginning of 2017, Eckhard Gottschalk (PARTRIDGE coordinating partner for Germany) attended a farmer meeting in Goslar (Lower Saxony) where an interesting discussion about the new flower block scheme was held.

The exciting outcome of this was that the federal state received an application for 37 hectares of PARTRIDGE flower blocks. The original application before the evening was for only 4 hectares, meaning the meeting was a huge success. During a second information evening in Goslar on 1st February 2018 (which was part of the PARTRIDGE Project), Eckhard informed a farmer cluster group, (consisting of farmers, hunters and other enthusiastic members of the public) on the best methods used to conserve the grey partridge and farmland biodiversity in general. Hopefully, this recent meeting in February will have the same positive effect.

The federal state of Lower Saxony offers flower blocks as part of their agri-environment scheme since 2004. Unfortunately, this measure has had little effect on farmland biodiversity so far. The flower blocks are typically sown in May and can be removed in October and, hence, do not offer overwintering habitat for wildlife and insects. With spring sowing of flower blocks, the germinating young plants do not provide enough cover for partridges to breed successfully. The University of Gottingen has been carrying out important research on partridges which has recently been used to influence the directive for the cultivation of flower blocks.

The new changes have been implemented in hope to increase the benefit towards farmland biodiversity. The flower blocks are now being divided into two parts, one half remaining untouched, offering suitable breeding habitat and winter cover for the grey partridge and other ground nesting wildlife. The second half is sown in spring and provides, with low vegetation density, valuable foraging ground for partridge adults and chicks alongside many other farmland species such as the skylark. After the first year of establishment the two different treatments within each flower block are typically alternated to avoid that the perennial half of the block becomes too dense over the years. This new management technique for the flower blocks supplies the grey partridge with a rich source of food, brood rearing habitat and protection from predation, everything that partridges need to thrive. 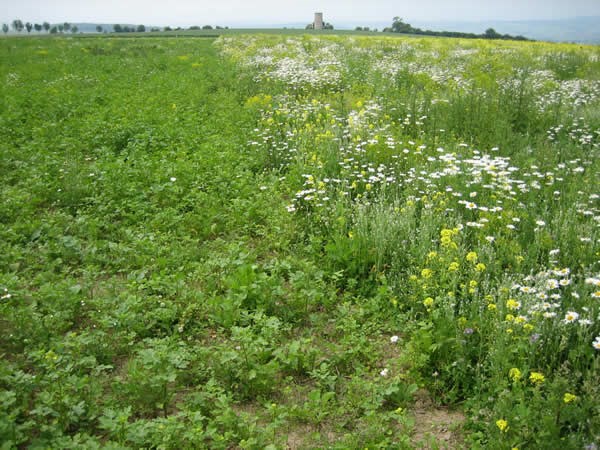 In 2014, the modified and partridge-friendly management of PARTRIDGE flower blocks were introduced in the agri-environment scheme of Lower Saxony. Currently most farmers still choose the annual flower blocks, which provide little benefit to the grey partridge and other farmland wildlife. Therefore, continuing efforts need to be targeted at farmers to achieve the best improvements with the grey partridge population and with farmland biodiversity in general.

Currently, together with the “Landschaftspflegeverband Göttingen”, discussions are being held with the federal state of Lower Saxony about this topic. The aim is to condense the different agri-environment schemes for flower blocks into one measure that is best-suited to recover farmland biodiversity generally.

This positive news suggests that the importance of targeted partridge conservation for the benefit of farmland biodiversity overall is being recognised! Written by Lisa Dumpe and Eckhard Gottschalk (Germany), edited by Holly Kembrey and Francis Buner (UK).