15 January 2018 - Published by Paul Stephens
The PARTRIDGE team of the Dutch province Noord-Brabant received the Golden Medlar award at the dutch biodiversity symposium on Thursday 14 December.

The award  was given for the new implementation of innovative agricultural schemes and for its diverse and successful collaborations with farmers, policy makers, hunters and volunteers in the demonstration area ‘Oude Doorn’.

PARTRIDGE is a four-year project that started in autumn 2016 and which is co-funded by the North Sea Region Interreg Programme. The project demonstrates how to increase biodiversity and ecosystem services by 30% across ten sites spread over the Netherlands, England, Scotland, Germany and Belgium. At all ten 500ha demonstration sites the projected increase in farmland wildlife is being brought about by implementing new management solutions by establishing 7% of farmed area with high-quality habitat tailored to the grey partridge which also benefits a wide-range of other farmland wildlife. ‘Oude Doorn’ is one of the ten demonstration sites. 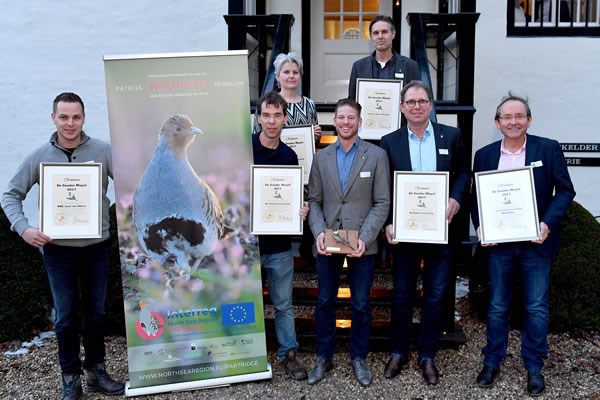 The first public farm walk held at ‘Oude Doorn’ demonstration site took place in July 2017, with a second planned on 17th January 2018. The interesting and engaging discussions during the farm walks as well as other communication activities and events are an opportunity to give farmers, policy makers and the public a better understanding of how important these management measures on agricultural lands are for the grey partridge as well as farmland biodiversity in general. 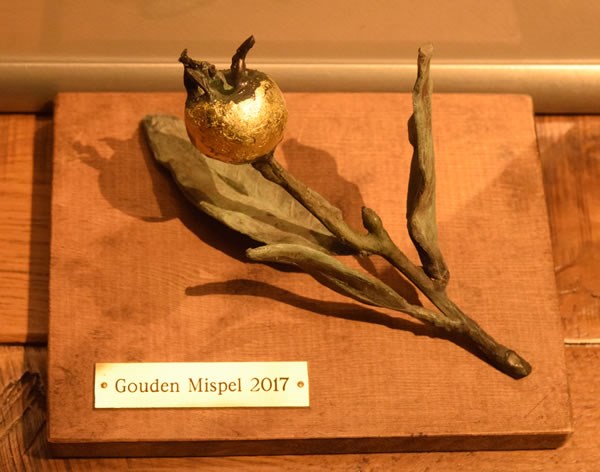 The medlar (Mespilus germanica) is an iconic fruit bearing shrub brought to Central and Northern Europe by the Romans, which represents the old agricultural landscape with high biodiversity. Within the PARTRIDGE project, hedges contain species specifically targeted for Grey partridge. They consist of shrub species such as hawthorn (Crataegus monogyna), dog rose (Rosa canina), field maple (Acer campestre) and medlar, which are planted to provide cover for the partridge and habitat for other farmland wildlife such as bees and butterflies. The award, the golden medlar, is therefore a beautiful reward for the hard work of all the people within the project!