08 June 2017 - Published by Paul Stephens
This April and May the first public excursions were held at the Dutch PARTRIDGE demonstration site at Burgh-Sluis where several people from inside and outside the area participated.

While numerous skylarks filled the sky with their beautiful song, the guests were shown around by our local NSR interreg PARTRIDGE coordinators Alex Wieland and Chris Vreugdenhil and one of the participating farmers, Willem Smallegange.

Together they highlighted the urgency for the conservation and restoration of farmland biodiversity in the Netherlands because species, like the skylark and grey partridge, have declined more than 95% over the past 50 years, mostly due to an intensification in agricultural practices. Therefore, singing skylarks have become a very rare wildlife encounter in the Netherlands.

Ground nesting birds in particular, such as the grey partridge, have been badly affected by more regular – and often unnecessary - mowing of grass margins, dikes and ditches during the breeding season. At our demonstration site in Burgh-Sluis, the PARTRIDGE project got off to a very encouraging start with eight farmers already having improved their mowing regimes and by incorporating new high-quality habitat measures tailored to benefit grey partridges and farmland biodiversity in the area in general. 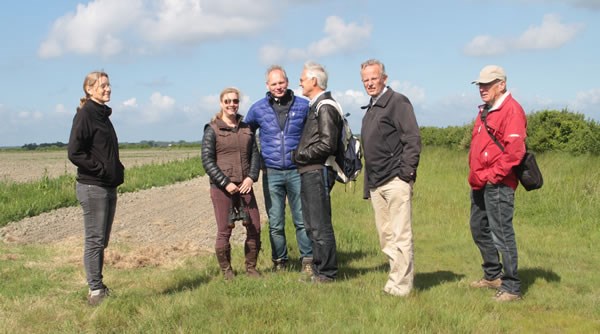 Farmer Willem proudly showed us one of his well-managed grass margins, where he provides a rare refuge for the Southern Marsh Orchid. Unfortunately, the highly-inspired excursion participants could not be taken to have a closer look at one of his new beetle banks, a measure introduced in the Netherlands through PARTRIDGE, because of several lapwings and a grey partridge pair breeding close by.

In the coming months, more groups have requested to visit the area on guided tours and we will be showing farmers and interested people how different stakeholders in the area are coming together in an attempt to make our countryside full of life again.

By Chris Vreugdenhil and Alex Wieland