Dutch demonstration sites visited by groups from Belgium and Limburg

Grenspark Groot Saeftinghe' is the establishment of a transnational nature reserve on the Dutch/Belgian border. The new project focuses on the restoration of bird biodiversity, optimisation of estuarine nature and eco-hydrological restoration of the inner-dike areas. At the core of the reserve exists the largest brackish salt-marsh of Europe, Saeftinghe. In the surrounding inland buffer zone, new habitat measures are required to develop a suitable habitat for marsh harriers and to support farmland birds.

Chris Vreugdenhil and Chiel Jacobusse showed the enthusiastic Belgian project group around the Dutch PARTRIDGE demonstration site, explaining the project and sharing their knowledge about how to successfully protect farmland birds on a landscape scale. With habitat measures such as beetle banks and PARTRIDGE flower blocks being newly-introduced to the Netherlands, the visit didn’t disappoint! 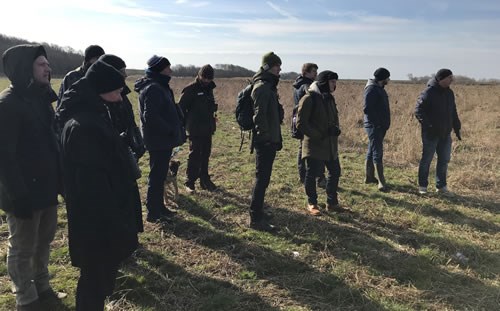 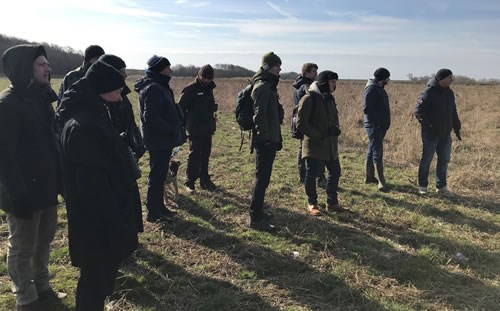 Remaining flocks of wintering songbirds were still abundant and seen foraging on the last sunflower, teasel- and chicory seeds in the PARTRIDGE wild bird mixes. The farm walk was followed by a presentation during lunch which explained the PARTRIDGE project approach and the habitat measures implemented to reverse farmland biodiversity loss. Altogether, a great way to disseminate gained knowledge from one Interreg project to another!

The demonstration site ‘Oude Doorn’ was also visited in April by a group of 35 people from the most Southern province of the Netherlands, Limburg. There, various grey partridge projects are about to start this year. The turnout was extremely diverse as policy makers, farmers, hunters and volunteers were united by one thing - protecting the grey partridge from further decline in their local area. 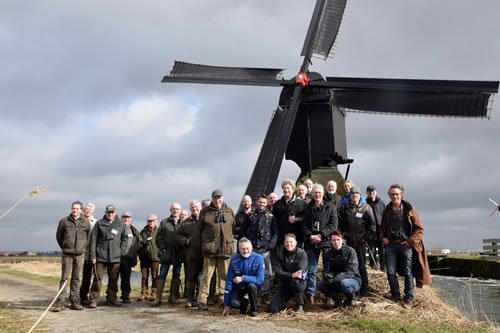 Before heading to the demonstration site, Jochem Sloothaak and Meeuwis Millenaar opened the exchange with a presentation about the approach and PARTRIDGE measures that have been introduced to the site. After lunch, the visitors hopped on the bus again, to be dropped off at the demonstration site, where Jochem lead the excursion through the area. They visited the beetle banks, flower blocks and other measures, like the supplementary winter-feeding stations.

One of the participating farmers of the area, Rens Kolff, joined the excursion and was able to provide the group with valuable answers about the implementation of the measures on his farmland. One of the local millers kindly opened the doors of a mill in the area to the visitors, which was an enjoyable addition to the field trip. And to cap off the day, a pair of partridges was spotted at the last excursion point, which formed a perfect ending of the trip. Overall, the exchange served as a perfect way to share the gained knowledge in theory and to demonstrate the implementation of this knowledge in practise.