Delving Deeper into the PARTRIDGE Mix

Earthworms are well-known for their role in making up a healthy ecosystem. Primarily, they recycle nutrients back into the soil by feeding on plant debris, and aid in essential processes such as decomposition, soil fertility, flood prevention and the formation of soil structure. They are also an important food source for many species.

There is a lack of earthworm recordings in relation to distribution and diversity, but it has been shown in previous studies that field margins can enhance earthworm biodiversity. That is where our study, which looked specifically at the impacts of the Interreg PARTRIDGE project wild bird seed mix on earthworm biodiversity, comes in. This mix contains a variety of different plant types - chicory, sweet fennel, and perennial rye to name a few. The mix is designed as cover for game birds such as the grey partridge as well as for songbirds, hares, and other species. We looked at two different ages of the mix – a 2nd and 3rd year (indicating how long the mix has been established) and compared them to conventional arable crops (stubble and oilseed rape).

We collected the data across three cold, windy, and sometimes rainy days at Balgonie estate, one of the Scottish demonstration farms in Fife. In total we took 40 samples, split across 5 different fields – both within the fields and the adjoining PARTRIDGE mix. Each sample consisted of a 20×24cm pit, which was then splashed with a not-so healthy dose of mustard water in an attempt to entice any deep-burrowing earthworms to the surface.

All set up for counting earthworms. Photo by Fiona Torrance.

It was then up to me and my fellow placement student to sift through the unearthed soil and pick out any worms we were lucky enough to discover. First, the worms were classified into three main types (surface dwellers, below surface and below soil-level worms), and were further classified as either adult or juvenile – made most obvious by the presence of what is called a ‘saddle’ on the adult worms. 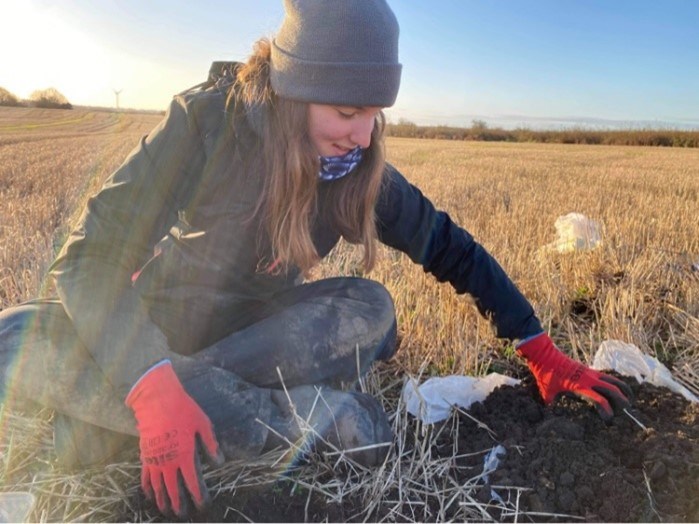 Sorting through the soil. Photo by Tamara Spivey. 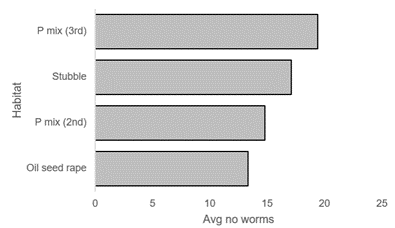 This study demonstrates encouraging results, especially for the 3rd year mix, which contained a higher number of worms than any other habitat surveyed. This has positive implications for the PARTRIDGE mix as it seems it is not only a sanctuary for partridges, but also for earthworms. As a result, we plan to continue sampling earthworms at Balgonie for the remainder of the project to further increase our still very low sample size upon which the preliminary results reported here are based.