18 September 2017 - Published by Paul Stephens
Members from the Danish parliament visited one of the Game and Wildlife Conservation Trust’s demonstration farms to find out about a crucial conservation project.

The group of 25, including the Danish Environment Minister Mr. Esben Lunde Larsen, was given a tour of Rotherfield Demonstration Farm on Wednesday 13th September to find out more about PARTRIDGE - a North Sea Region (NSR) Interreg Project.

Francis Buner, leader of PARTRIDGE and senior conservation scientist at GWCT, led the tour with Harold Makant, lead advisor at Natural England, emphasizing how the loss of farmland biodiversity can be reversed successfully across four NSR nations. 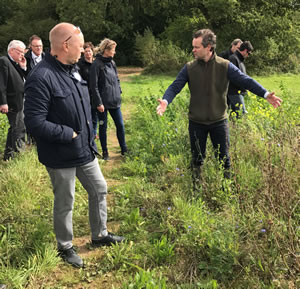 Specifically, the farm focuses on grey partridge-tailored habitat improvements, the loss of which is a key factor in the decline of farmland wildlife and ecosystem services across Europe.

The farm’s objective is to showcase an increase of biodiversity indicators by 30% at each demonstration site by 2020 and to influence future agri-environment schemes across the partner countries.

After the walk, Liberal MP and acting chairman for the Environment and Food Committee, Erling Bonnesen, praised GWCT and Natural England in the name of the Danish delegation.

He said: “You believe in your projects and it’s good to hear your vision, resource and ideas and we can take a lot back to Denmark with us where we can have an open discussion. We are very satisfied with what we’ve seen, so thank you.”

Dr Buner said: “Given that the Interreg PARTRIDGE project aims to improve current agri-environmental schemes across the North Sea Region, the visit of the Danish Environment Minister, together with 15 Danish parliamentarians at the Rotherfield Demonstration Farm, was a highly significant event. It was a great opportunity to be able to show an interested and engaged group of foreign policy makers first-hand how farmland biodiversity can be reversed by setting aside 10% of the farmed area for high-quality habitat measures such as wildflower mixes, beetle banks and arable margins.”

Harold said: “When you see this everyday, you get used to it. But sometimes, when you see things from a different perspective, you realise how good it is and, if we can enthuse others to do it, then that’s excellent.” 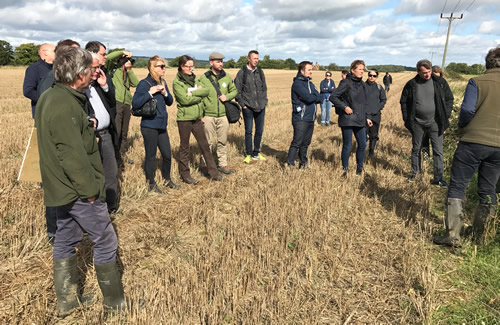 Extending to approximately 800ha (1977 acres), the Rotherfield demonstration area is characterised by mixed farmland, managed by the estate and estate manager Joseph Edwards.

The project started seven years ago and shows the positive recovery effects habitat improvements and game management have had on grey partridge, lapwing, farmland and woodland songbirds and butterflies.