The GWCT PARTRIDGE project interns Lucy Robertson and Molly Crookshank, have worked together to produce a beautiful flying grey partridge enamel pin, to raise funds for the PARTRIDGE project.

PARTRIDGE is working with farmers, hunters, conservationists and scientists across seven countries in Europe to increase farmland biodiversity by 30%. With PARTRIDGE’s innovative management solutions tailored to conserve the grey partridge, the project demonstrates how to reverse their decline as well as that of other farmland wildlife using a collaborative approach. 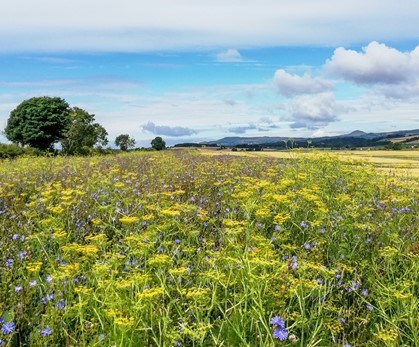 Lucy kicked off the process of designing a new pin by taking inspiration from one of the PARTRIDGE project’s beautiful infographics created by Anne-Lieke Struijk-Faber, graphic designer at BirdLife NL, and edited it so that it was within the guidelines needed for enamel pin production. She then used a Pantone colour guide to decide on the colours needed. The production team decided to order an initial sample batch of 10 pins; five in silver metal and five in gold metal, to determine which of the two versions we preferred before promoting the final product. The gold version won in the end. Anne-Lieke then designed a gorgeous backing card for the pins to be mounted on. The mock-up design and backing card is shown below: 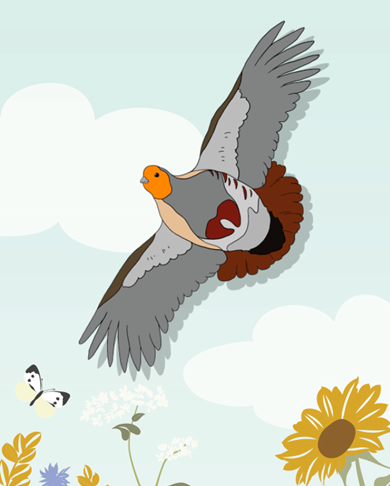 The project team decided to produce a fundraiser page to raise funds needed for the production of 1000 flying partridge pins. First, Lucy calculated the goal amount at £2,900, which includes pin production, backing cards, packaging and postage worldwide. Then she went about designing a professional, eye-catching page, which explains the project and the pin. She concluded: ‘I really enjoyed being able to combine the field work skills acquired during my placement with my passion for arts and drawing to help the project produce this pin.’

You can visit the fundraising page here  - http://kck.st/326BzH7

Meanwhile, Molly worked with her friend and Film Editor, Finlay van der Vossen to create a promotional video for the partridge pin. By collecting footage from the project partners across the ten demonstration sites, Molly was able to put together an engaging video narrated by Lucy.

Molly said: ‘It was great fun and sparked lots of other ideas for future project videos!’

Molly has been working for the PARTRIDGE media team during her internship and is currently promoting the pin as widely as possible.

All funds produced from this fundraiser will go towards core project funds, in particular habitat measures, education and most importantly allow us to reach out to more farmers to support and guide them to farm with nature. PARTRIDGE has already been making a real impact across Europe, with over 100 farmers on board and increasing.

Deadline for last orders is Tuesday 15 of September. Order your pin now before it’s too late!