05 October 2022 - Published by Francis Buner
Six years into the PARTRIDGE project we have gained growing evidence to suggest that PARTRIDGE flower blocks enhance farmland biodiversity and benefit the grey partridge across the North Sea region, including Flanders. It is essential to emphasize that co-operation was fundamental to our success. This new video focuses on our Ramskapelle demo site, showcasing the site’s flourishing flower blocks and illustrating the importance of stakeholder collaboration.

Watch our latest video below to see some flourishing flower blocks at the Ramskapelle demo site and find out what our farmers, Olivier and Eric, think of them!

Back in 2016, we approached the Flemish farmers and hunters at the Ramskapelle demo site to discuss the concept of the PARTRIDGE flower blocks. We explained why farmland biodiversity matters, how this biodiversity would be improved by establishing flower blocks on their land and how quintessential their role as farmers was in achieving this. A difficult message to get across, considering all we had at that time was a piece of paper with a theoretical concept (although based on scientific evidence) and some colourful pictures from a few successful flower blocks in Germany.

Six years later we are proud to announce, besides several other measures, that 20 hectares of PARTRIDGE flower blocks have been implemented at our demonstration site. For a few years now, these have been managed by eight farmers while a multitude of researchers and hunters monitor the wildlife in the area. Working together with so many people is essential, but often also very challenging. Of course, we have faced some obstacles along the way, but luckily the grey partridge was not the only common interest among us! On a few occasions a tasty Belgian beer and a good chat proved to be inspiring enough to bring us back to the same page.

After several years of trial and error we managed to develope suitable seed mixes and management techniques which are appropriate to the Flemish context (such as soil types, working techniques, behaviours that are rooted in our culture and local weather conditions). Thanks to the hard work of our project partners, our farmers and many others, PARTRIDGE flower blocks are now available as a measure through the Flemish Agri-environment Scheme (AES) in the new Common Agricultural Policy (CAP).

The close and constructive co-operation between all project stakeholders, from a local to a national and even international level, acted as a fertile soil where both, stakeholder co-operation and fertile soils have been fundamental in achieving successful PARTRIDGE flower blocks at the Ramskapelle demo site.

To find out even more about our beautiful demo site read the flowing story map, which is full of interesting facts, photos and the people who are involved in bringing biodiversity back into our farmed landscape. 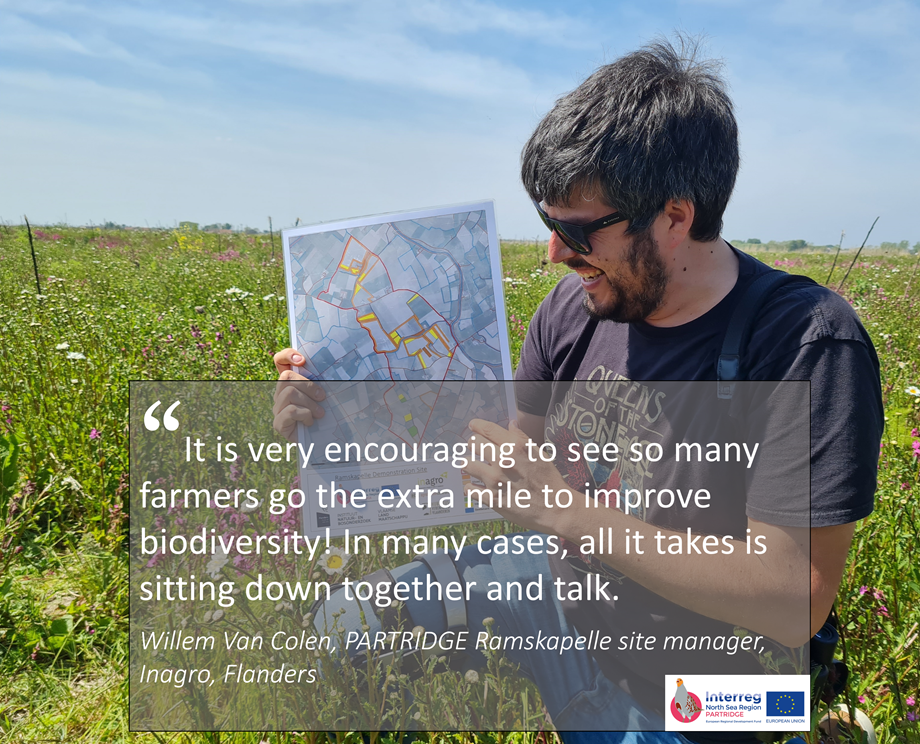 Written by Willem Van Colen, researcher at Inagro and co-ordinator of the Ramskapelle demo site and edited by Beth Brown, PARTRIDGE placement student at The Game and Wildlife Conservation Trust; and Francis Buner, Head of PARTRIDGE, GWCT, England.