Behind the Scenes of a PARTRIDGE Playback Survey

10 February 2021 - Published by Francis Buner
As a placement student working for the Interreg NSR PARTRIDGE project at the GWCT, I have had the opportunity to carry out a variety of surveys and see numerous species of wildlife in the process. However, after completing my first grey partridge playback survey last week, I have definitely found my favourite. So, I thought I’d take you all along with me for the survey and give you some insight into why I loved it so much!

Playback surveys are completed each year, once adult partridges begin pairing up in preparation for the breeding season – usually from February-March. They involve walking a one km long transect and playing a male partridge call in order to enact a defensive response from any nearby cocks.

Once we had all arrived on site (in this case we were surveying at Balbirnie Home Farms, one of our reference sites for the PARTRIDGE project), we all gathered at a distance around the rear of our trusty truck and given a quick rundown of what to expect. As the surveys have to be done in a short time period from half an hour after sunset to an hour after, to reflect when the male grey partridges are most active, we were all assigned our own transect to survey. After the briefing we masked up and popped into the truck for a short windy drive to the transects – ensuring appropriate distancing measures were followed and proper ventilation provided by fully opening all windows. As my transect was the furthest away I was dropped off first. Armed with a head torch, speaker, and clipboard with a recording sheet and map, I set off to the start of the transect. 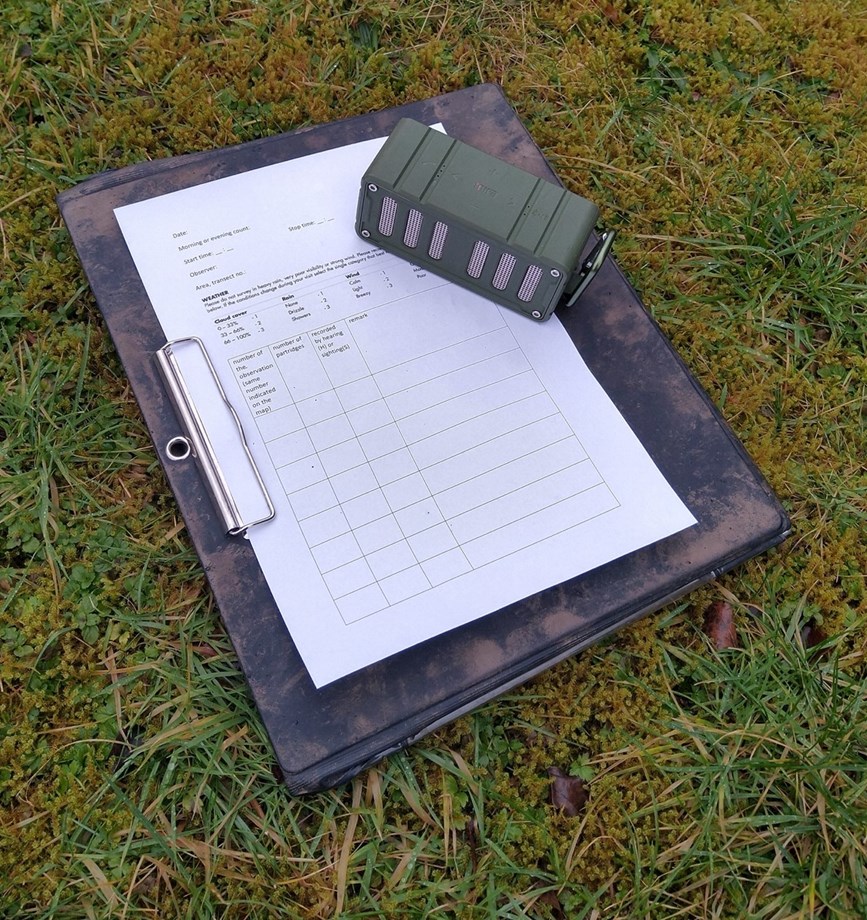 The transect ran down the side of a couple fields, but as I was dropped off first, I had half an hour to kill before the start of the survey. So, I took my time walking up to the start point, sat on a fallen tree trunk for a bit taking in the stunning snowy views surrounding me, and attempted to befriend some sheep (sadly to no avail). 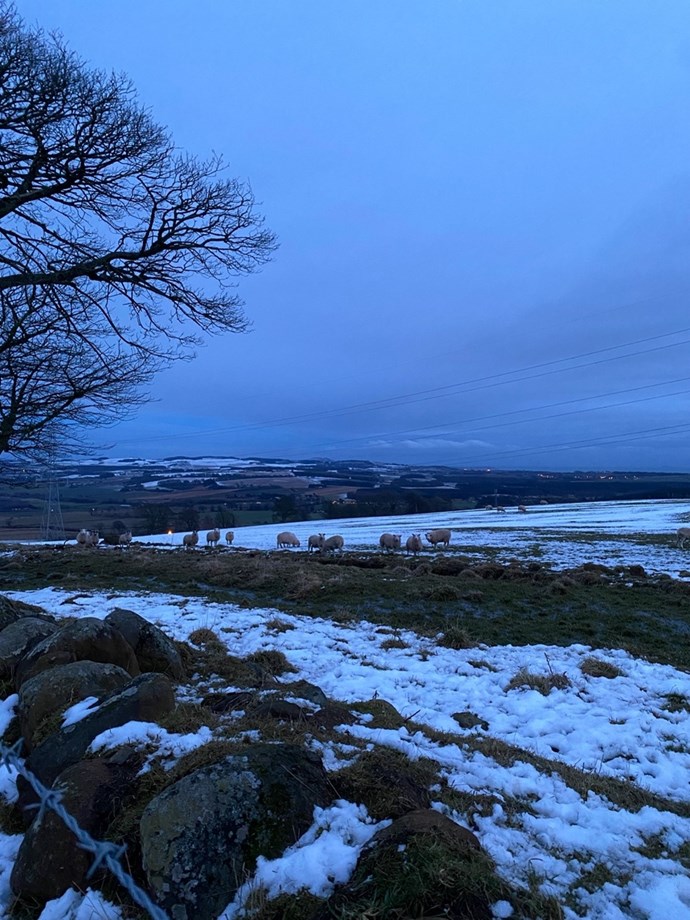 Some of my sheep ‘friends’, with a view of the Fife countryside behind them. Photo by Tamara Spivey

Just before our start time rolled around, I headed up to my start point and at 17:03 began my survey. Holding the speaker out in front of me, I played a male partridge call for 5-10 seconds, before pausing the recording and listening for a response for 10 seconds. I then repeated this 3 times, turning 90 degrees each time to ensure my entire surroundings had been covered. If a response was heard I would record it on the sheet and if not, I’d mark that none were heard. After this I’d walk 100m and repeat, much to the sheep’s annoyance I think!

For the majority of the survey, I had no response and was certain I’d finish without hearing or seeing anything at all. Then as I got to my ninth survey point and paused the recording for the millionth time, I heard a distant but familiar ‘kieer-ik’ sound! I got ever so slightly over-excited but managed to control my excitement enough to carry on the survey, and at the next point I heard a second male in addition. Then as I reached my final survey point and started playing the recording, I heard the second male getting closer and spotted him in the light of my head torch in the next field over. It was almost pitch black by this point so the male (who I quickly named Alan) couldn’t see me and he flew over the fence till he was only a couple meters away! Alan wasn’t best pleased by my intrusion and preceded to square me up, deciding whether or not to take me on as a competitor. He eventually decided it probably wasn’t the best idea as he barely came up to my shin and flew off back into the darkness.

This was the first time I’d been able to see a grey partridge up close and is definitely an experience I’ll be remembering for a long time to come!

Alan expressing his displeasure at my presence. Video by Tamara Spivey