Beetle banks – why and how to build them for farmland wildlife

23 May 2018 - Published by Paul Stephens
Beetle banks are c. 0.4m high earth banks built across the middle or alongside arable fields. They were invented in England in the early 1980s (a collaboration between GWCT and Southampton University) with the aim to provide suitable overwinter habitat for predatory insects (such as the Carabidae beetles) and spiders.

Winter insect densities were shown to reach over 1000 individuals/m2 in tussocky beetle banks! Come spring, these same insects move into the neighbouring crops and reduce pest species significantly. A win-win for wildlife and farmers, but it gets better.

Not long after the first beetle banks were established across a wider area of the UK in the early 1990s, it became clear that other farmland wildlife was benefiting as well, such as grey partridges using them as nest sites or to forage for chick food, hares find shelter from wind-swept wintery days and harvest mice find suitable nest sites in the tussocky grass.

Sounds wonderful, and it is, except that beetle banks are narrow linear features, and as such can act as a predator trap. This means that foxes, badgers or raptors that hunt alongside them, have a good chance of finding anything from ground-nesting birds and chicks, sheltering leverets or bumble bee nests. This may especially be the case in areas where no predation management takes place, which is the case across most parts of the UK and especially Europe.

However, there is a simple non-intrusive solution: by planting a minimum 15m wide, suitably designed wild-bird seed mix or flower block along at least one side of the bank, the chance of a nesting partridge hen being detected and killed by a fox is significantly reduced (as shown by Dr Eckhard Gottschalk and his team from the University of Göttingen, Germany). It can, therefore, be assumed that the wider a block, the higher the chance that nesting or sheltering wildlife will remain undetected from their natural predators. 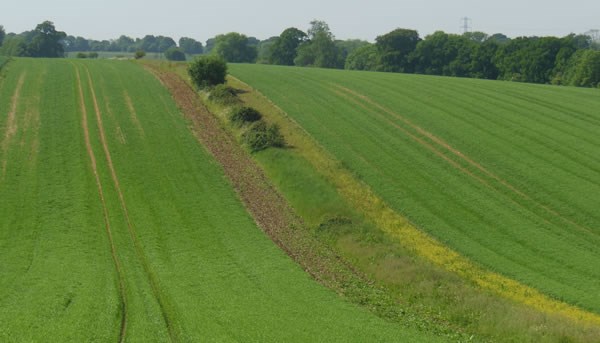 At Rotherfield, beetle banks are part of the HLS and mid-tier agri-environment agreements with Natural England. There are 8 kilometres of them already, with another 1 km established last week.

How to establish the perfect beetle bank

During normal autumn or spring cultivation, create a 2-3m-wide and minimum 0.5m high bank (after establishment the bank usually settles and hence ‘shrinks’ a bit), by careful two-directional ploughing. To achieve the desired dimension, plough the width of approximately 8m bare ground into a bank. At Rotherfield, using a 6-furrow reversible plough, we worked the equivalent of three plough-widths to build our banks. This required eight passes, four on each side.

Once the bank is established, wait until the bank has settled before sowing with a suitable grass mix. This mix should contain at minimum cock’s foot grass (Dactylis glomerata) and timothy grass (Phleum pratense). However, I recommend adding some flowers, ideally species that can compete alongside the grasses. This is because the vegetation on the bank should not be mown.

The beetle bank mix can be sown by hand or using a suitable drill, depending on what the farm has available. After sowing, the seeds should ideally be slightly compacted. This can be done with a hand roller, high-tech, or simply by letting a group of energetic kids walk over the bank…make sure the seed bed is as clean as possible before sowing, to help avoid nasty weed problems later.

To further improve the wildlife value of a beetle bank, I recommend to plant clumps of bushes every 100-200m along the bank. This will create extra nesting habitat and escape cover for birds, winter food for thrushes and nectar for pollinators. At Rotherfield, we used a mix of hawthorn (Crataegus monogyna), spindel (Euonymus europaea), privet (Ligustrum vulgare), dog rose (Rosa canina) or field rose (Rosa arvensis), two plants each. Ten years later, the bushes are being used by bird species of conservation concern such as yellowhammers, whitethroats, dunnocks, grey partridges and kestrels. I am sure corn buntings would use them as perches for singing, but unfortunately, they haven’t managed to recolonise Rotherfield yet. 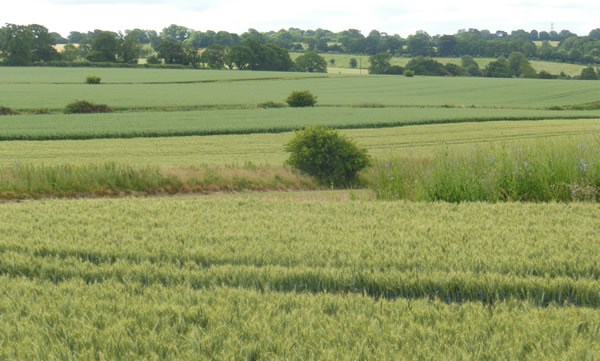 Recently, the NSR interreg PARTRIDGE project has introduced beetle banks to the Netherlands and Belgium, with other European countries such as Poland and Hungary to follow in the very near future.