A year's worth of Partridge monitoring

The grey partridge is our flagship indicator species, which means that providing habitat for it also benefits countless other species. To prove this, the PARTRIDGE project does not only include the monitoring of partridges, but also of hares, breeding birds, wintering birds, insects, earthworms, hunting bags and animals visiting the feeders installed at the demonstration sites. All this data collection provides the fieldworkers with quite a full year’s worth of monitoring activities.

A fresh breeze, the first warming rays of sunshine, flowers appearing as if from nowhere, swelling birdsong breaking the eerie silence of winter. Spring has arrived, as sudden and unnoticed as always. One day you wake up, and it’s there.

However, for people working in the field, the arrival of spring has been in the air for some time now. For the PARTRIDGE fieldworkers, it marks the ending of the hare and partridge monitoring season, and the beginning of the breeding bird season. In fact, we monitor trends in biodiversity year-round to provide evidence for our aim of a 30% increase in farmland wildlife by the end of the project. This is done by comparing the trend in biodiversity found at the project’s demonstration sites to the trend found at their control sites. At the demonstration sites, farmers and hunters try to provide high-quality habitat for grey partridges and at least 7% of the total area should be covered with such habitat. Control sites are similar nearby areas of the same size, but without the extra high-quality habitat.

Left: the rising of the moon during the early hours of partridge counts. Right: counting partridges in summer from a distance to avoid disturbing them.

Hare counting starts in January, in the heart of winter. PARTRIDGE fieldworkers, often accompanied by enthusiastic volunteers, drive along fixed transects whilst lamping to count hares and other species of interest. The lamping takes place at night, for four hours straight, with the windows down in a moving car. No warming rays of sunshine are involved during this type of monitoring. Instead, coffee, tea, over-use of the car heating and wearing every single piece of clothing you own have to do the trick. Luckily, the rewards are wonderful, as, next to seeing more hares in one night than some people do in a lifetime, the early hours of the night are the playground of all sorts of animals. Foxes, stone martins, badgers, European polecats, barn owls, long-eared owls and woodcock have been seen on several occasions.

Wildlife is not the only interesting thing about these counts though. Since the lamping takes place at night, local people and the police often think there are burglars or poachers about. The people in the field are asked regularly what they are doing. Luckily, after explanation, people understand and one time such an encounter even led to a new volunteer! 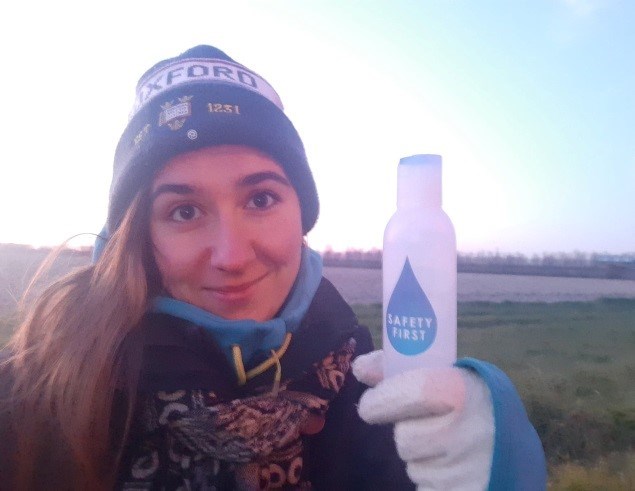 When hare counting ends around mid-February, partridge counting season starts. From mid-February to mid-March, the males, or cocks, are searching for a partner. Counting takes place either around sunrise or sunset, when vocal activity is the highest. Using the playback call of a cock, the fieldworkers and volunteers trick the cocks in the field into thinking there is competition, thus revealing themselves and responding to the call. The number of cocks calling back is used as an indicator to track the partridge population trend in the study sites.

There is about one week of overlap between partridge and hare counts. Because partridge evening counts end around an hour after sunset, and hare counts only start later, these counts can be combined in one night. This, however, does not always go according to plan. Project leader Francis Buner describes an eventful evening in England: “On the way to our study site, we had to abandon the car because the clutch disk had slipped. We rushed on to do the partridge survey, only to find the main road closed after a serious accident. We got to the survey after a big detour just about in time. The pub we had in mind for supper between counts wouldn't serve food before 7pm because the kitchen staff were stuck in traffic. Then, starting the hare count we found the main entrance gate barricaded with a huge tree trunk in an attempt by the farmer to keep poachers out. About an hour later we got cornered by the wildlife crime police unit after they had been alerted by a neighbouring game keeper that poachers were out lamping. A friendly chat clarified things quickly, and my car key was handed back by the officer. When asked to identify myself I showed him my Oyster card with the queen on it. We had a good laugh... To get the students back home, another student had to come and get them with the pool car at 10:30pm. Because the main road was still closed, we agreed to meet at some easy to find petrol station about 15min away. Taking the shortest route, we find the road closed just 1min before arriving at the meeting point, forcing us to do another detour of 10min. On the plus side, counting conditions were ideal that night, with lots of hare, several barn owls and woodcock about.” Colleague Lucy Robertson adds: “We all thought it was hilarious! The police also allowed us to try out their infrared night vision which was great fun!”

In Germany, partridge counts are not without physical danger, as Eckhard Gottschalk explains: “It was already quite dark and I was playing the partridge call, when a goshawk flew towards me. I think it wanted to eat the partridge that was calling. Only when it was 2 meters away from me, the goshawk realised that I was too big to be a partridge, and called off the attack.”

By April, partridge counts end and the fieldworkers commence breeding bird surveys. As with most of the monitoring, they are joined by motivated volunteers. Fieldworkers and volunteers map the territories of birds that pair up, make a nest and raise chicks in the study area. This is done by walking fixed transects from sunrise onwards, repeating this a couple of times until mid-July.

Dutch colleague Jochem Sloothaak explains what working with volunteers is like: “Never forget the coffee! About one and a half hours after we start the breeding bird survey, we take a little break. I always provide home-made coffee for the volunteers. Whether that coffee is strong or weak, it doesn’t matter. It's all about that moment being outside with the volunteers, enjoying biodiversity, that’s what we work for.” 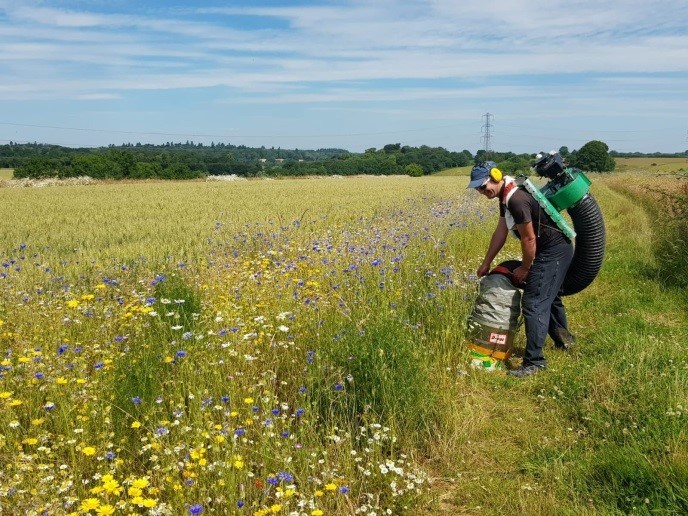 Partridge chicks feed on insects so that they can grow quickly in their first weeks. High-quality partridge habitat therefore also includes seed mixes that harbour a lot of insects. In addition, beetle banks have been established for the same reason, with the added benefit of providing the chicks a sunny and dry refuge. To check if these measures provide enough chick food and to investigate the value of the mixes for insect biodiversity, they are monitored as well. As seen in the picture, monitoring insects can turn science into science-fiction…

By the end of summer, partridge chicks are running around with their parents, looking for food and growing fast. During this period, the fieldworkers go back out into the field to count and age the partridge chicks through their binoculars. By doing this, the adult/young ratio can be calculated in each study site. Comparing this ratio with the trend resulting from the partridge spring counts provides more information about any population changes and their underlying cause at the study sites.

Around mid-September, partridge chicks are getting too big to be recognised as juveniles anymore, so in fact, partridge autumn count ends before autumn actually starts (for how to sex and age grey partridges see following publication) To make things more confusing, winter bird surveys start in autumn, and run all the way until March. During these counts, some study sites are surveyed once a month. Fieldworkers go to fixed points in the study site, count all birds within 300 meters for five minutes, and repeat this once. Demonstration sites, with high-quality habitat, are divided into points with such habitat, and points without. This way, analysis can show not only if there are more birds in the demonstration sites than in the control sites (those without high-quality habitat), but also if these wintering birds are concentrated around the areas with high-quality habitat. 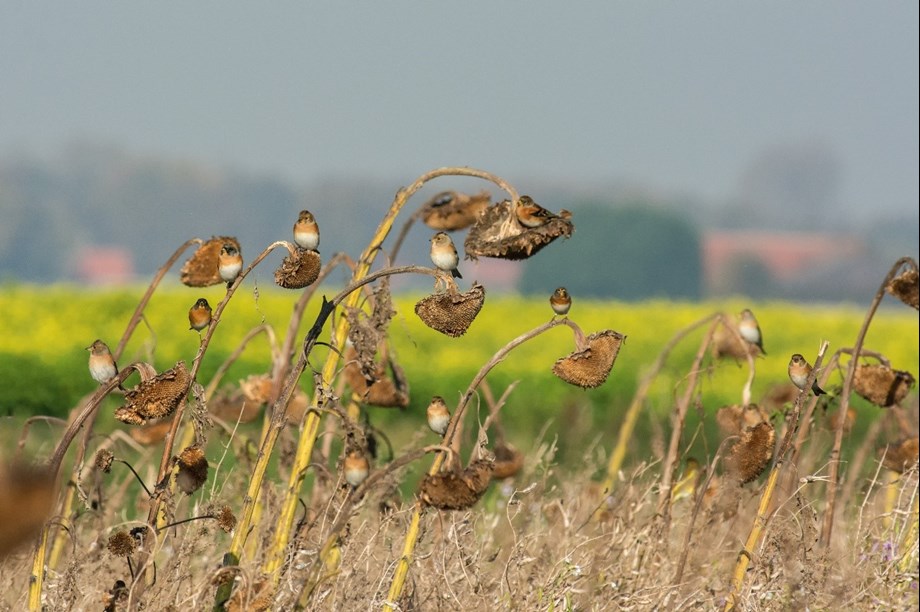 By the end of December, when instead of birdsong, Christmas-jingles fill the air, PARTRIDGE-fieldworkers begin to realise that another year has passed. It is time to start planning the hare counts, and before they know it, spring will have arrived once again…