13 February 2019 - Published by Paul Stephens
The grey partridge is one of the very few bird species in Europe that stays in a family group through most part of winter (Long-tailed tits do the same).

These so called “coveys” either consist of a parental pair with their fully-grown young that hatched in the previous summer, often joined by one or several adult partridges that failed to raise their own young, or a group of adult birds only, all of whom lost their brood. Around Valentine’s Day, love is in the air, also for partridges. At this time of year, they get very restless and vocal and, if lucky, a keen birdwatcher may observe some dramatic scenes on an early morning or just before dark. (In the UK, where winters are generally milder than in the rest of Western Europe, pairing-up sometimes happens as early as mid-December). With partridges, it’s the ladies who get the choice; as they are normally in the majority, the males have to put in some extra effort in order to get a bride. The future partner is never one of the hen’s brothers, nor her father; among grey partridges it is always a non-closely related stranger. Partridge hens can be very picky: it’s not uncommon for reared partridges that were forced into marriage to end up very unhappy and refuse to breed at all. 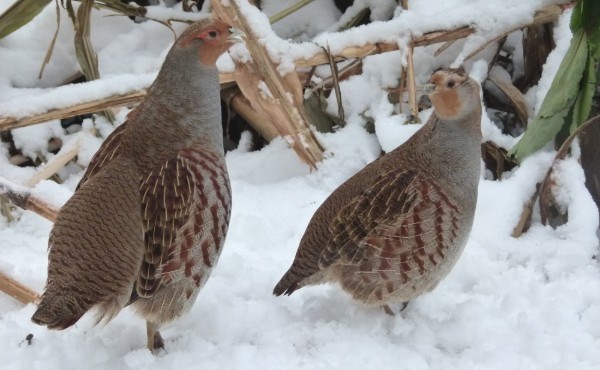 In the wild, where things are a bit more liberal than in captivity, cocks begin to draw their attention to neighbouring companions by loud “kiereck”, “kiereck” calls. Soon enough, their hormones spill over and the cocks start to engage in fighting, where long chases are interrupted by sometimes fierce head-on battle, where feathers ‘scatter’ and the occasional cock is forced to declare defeat with bloody scratches on his head. Cock fighting at its finest! By risking bad injury, a local hierarchy is established, from which the dominant cocks increase their chance of attracting a female. The latter don’t just watch from distance, but instead also become more and more agitated and run from one cock to another and watch as the fighting continues.

To get her full attention, partridge cocks will stand in front of a hen, as upright as possible, with an open beak, uttering their surprisingly quiet “gru” display call. The interested hen on the other hand, will look him straight into the face, from right to left, the cock still standing upright uttering his calming “gru”, “gru”. Hand-tamed hens may even take fancy of a human substitute as Eckhard Gottschalk, PARTRIDGE lead coordinator for Germany, once witnessed. Two hens flew on one of his shoulders each and looked deep into his eyes, but which of the two went away as the beloved, we’ll never know.

As one can imagine, this frantic activity, is highly risky. Predators can too easily notice all the commotion. Therefore, partridges conduct their courting at dawn and dusk, when raptors are normally still roosting, but when there is still just enough light to recognise a fox’s silhouette approaching. This intensive partner hunt only lasts for half an hour in the mornings and evenings over a period of one to two weeks. Speed-dating done partridge-style!

Very occasionally, where high densities of partridges prevail, partridges can gather in large numbers at such “speed-dating leks”. Once, PARTRIDGE project leader Francis Buner observed around 60 partridges in late winter that took to such a “wedding stage” in the middle of one field in England. The sight surely was a memorable one, with numerous fights being fought simultaneously, and dozens of hens running around, even chasing each other, in what seemed a desperate attempt to win over the best cock for themselves. On the following day, the spook was over.

Quite often, during the first days that follow, the hen seems plagued by doubts about her choice and with her betrothed trailing after her, she rushes at another cock, to make the two fight. A change of heart is still frequent during this time. Telemetry studies have revealed further interesting details: Two radio tagged birds who felt they were made for each other, left the courting place together and dispersed for a few days on “honey moon” a few kilometres to the south. However, the hen re-appeared without cock and chose a new partner. Her original partner on the other hand stayed back and found another hen that liked him instead.

Most couples find each other by the end of February or beginning of March. Often the entire population is paired off in the span of one or two weeks. Only the cocks who haven’t landed a hen are left alone, wandering the area desperately calling, hoping that they get a chance with a hen who lost her partner. It would be incorrect to refer to this period as a “breeding period”. In this time, a strong emotional bond is formed between partners. These bonds usually last for the whole of a partridge’s lifetime. The pairs only begin breeding in May. So, on Valentine’s Day, partridges are not just looking for romance, they are looking for a lifelong relationship.