A busy two days at Rotherfield

04 December 2017 - Published by Paul Stephens
Rotherfield farm was host to two recent visits, one from Natural England and the other by GWCT members of staff. This gave more than 110 people an opportunity to see first-hand and learn about the practicalities of farmland wildlife conservation aimed at showcasing how to reverse the decline of farmland biodiversity.

Rotherfield farm was host to two recent visits, one from Natural England and the other by GWCT members of staff. This gave more than 110 people an opportunity to see first-hand and learn about the practicalities of farmland wildlife conservation aimed at showcasing how to reverse the decline of farmland biodiversity.

On Monday 27th November, a group of Natural England agri-environment advisors, led by Harold Makant (Lead advisor for Natural England, Winchester), paid a visit to Rotherfield with a main focus on wildlife habitat measures that have been established over the past seven years. Rotherfield was an ideal place to host this visit as it has implemented over 10% of high-quality habitat measures (most of which under agreement with Natural England), aimed at improving habitat conditions for the Grey partridge and a wide range of other farmland species. With the initial target of the PARTRIDGE project being 7% high quality habitat - Rotherfield has gone beyond this with the extra effort paying off. 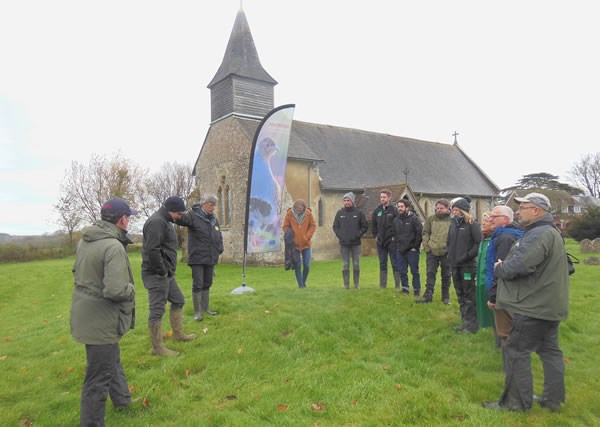 Leading the walk was Dr Francis Buner (Head of PARTRIDGE), Harold Makant (Natural England), Joseph Edward (Rotherfield estate manager) and Tim Furbank (Director at Oakbank. Throughout the farm walk, the importance of measures that are available under the English agri-environment schemes was evident. Measures like wild bird seed mixes, beetle banks and winter stubbles are omnipresent and ensure suitable wildlife habitat all-year round.

At Rotherfield, the schemes have enabled the successful recovery of, otherwise, nationally declining farmland bird species of conservation concern such as Yellowhammer and Skylark by an average increase of 77%. It is expected that the practical knowledge gained during the field visit will further assist Natural England’s farm advisors in reversing the decline of many farmland bird species and other wildlife such as wild bees, across England. 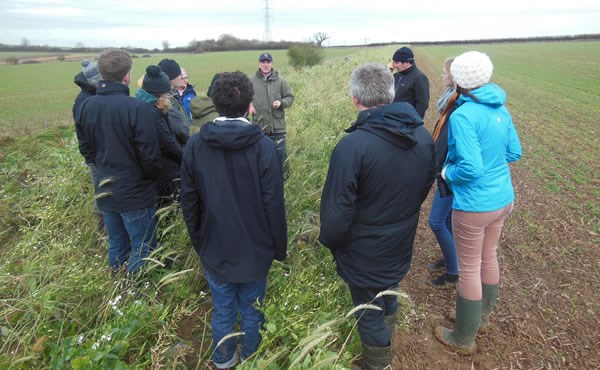 The following day saw more than 100 GWCT members of staff descending onto Rotherfield as part of their annual staff conference’s research and field visit day. In chilling temperatures, the wide-ranging group of employees (accountants, membership and communication staff, advisors, scientists and directors) were inspired and informed about the NSR PARTRIDGE project as well as the Rotherfield demonstration project. Interesting and engaging discussions were held throughout the walk while being shown around areas of the farm where wild bird mixes, beetle banks and floristically enhanced meadows have been established for the benefit of wildlife.

Leading the second day was Joe, Francis, and Malcom Brockless, GWCT’s gamekeeper at Rotherfield. This gave the group several different perspectives, ranging from a conservationist, gamekeeper and farmer, all explaining the benefits and challenges of each measure and how they have been implemented to fit alongside a modern farm business. With each perspective being extremely valuable, they all shared a common aim of increasing farmland biodiversity at Rotherfield.