The Burgh-Sluis Demonstration site is situated on the former island of Schouwen-Duivenland, in the Province of Zeeland. It borders the Schelde estuary and is protected by dikes. The flat and open landscape lies below sea level, so there are many kilometres of ditches in the area. It is these ditches, together with the hedges, dikes and farmsteads that define the landscape. Within the 500-hectare site there are eight arable and dairy farms, and some smaller nature reserves.

In winter, the area attracts wintering skylark, linnet and meadow pipit as well as raptors such as kestrels, hen harriers and short-eared owl. Already before the start of the PARTRIDGE project, nature organizations and the farmers’ collective have worked together to protect farmland birds and increase biodiversity on the farms, in addition to the traditional nature reserves. Through PARTRIDGE we have been successful in involving more stakeholders and together we aim to increase biodiversity and ecosystem services by 30%. The farmers in our demonstration site have created 12,8 ha new flower blocks, 4 beetle banks, hedges and winter stubbles for farmland birds. The combination of PARTRIDGE habitats with other habitat measures in the area, under agri-environmental schemes and realized by the farmers’ collective Poldernatuur, the nature organization Het Zeeuws Landschap and the Province Zeeland, currently (2019) add up to a total of almost 45 hectares (9% of the demonstration site). 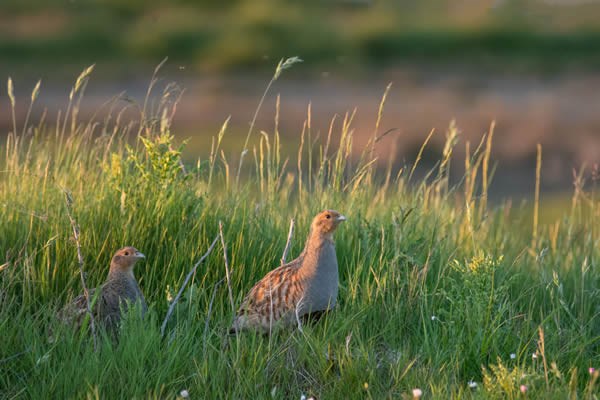 Although grey partridges breed and winter in the area, throughout the province of Zeeland numbers are critically low. At the start of the project, the first intensive monitoring of partridges showed densities of approx. 2,5 pairs per 100 hectare.  Since 2018 and 2019, we observe a gradual increase in breeding pairs of grey partridges. We aim to demonstrate how a diverse group of stakeholders can work together to improve the area in such a way that it becomes suitable again for a viable population of partridges and other farmland birds.

VIDEO: Beetle Banks in the Netherlands