Balgonie is in the ‘Kingdom of Fife’, close to the town of Glenrothes, in eastern Scotland. An arable-dominated region, the approx. 500ha area of Balgonie in the PARTRIDGE project produces barley, wheat, oats and oilseed rape, plus potatoes.

Here, the project is run by a consortium of local partners including Balgonie Estates Ltd (who oversee management of the estate as a whole), Kingdom Farming (the farm-management company), Scottish Agronomy (who run cereal crop trials on the site) and Kings (a UK-wide seed merchant), as well as GWCT.

Historically, Grey Partridge were more abundant than today in the open landscapes of Fife that surround Balgonie though the site does support a modest population despite no tradition of management for this species. Balgonie has a single owner, one farm manager (plus 2-3 tractor drivers) and no gamekeeper, and the team are very keen to see the number of greys on the farm increase. 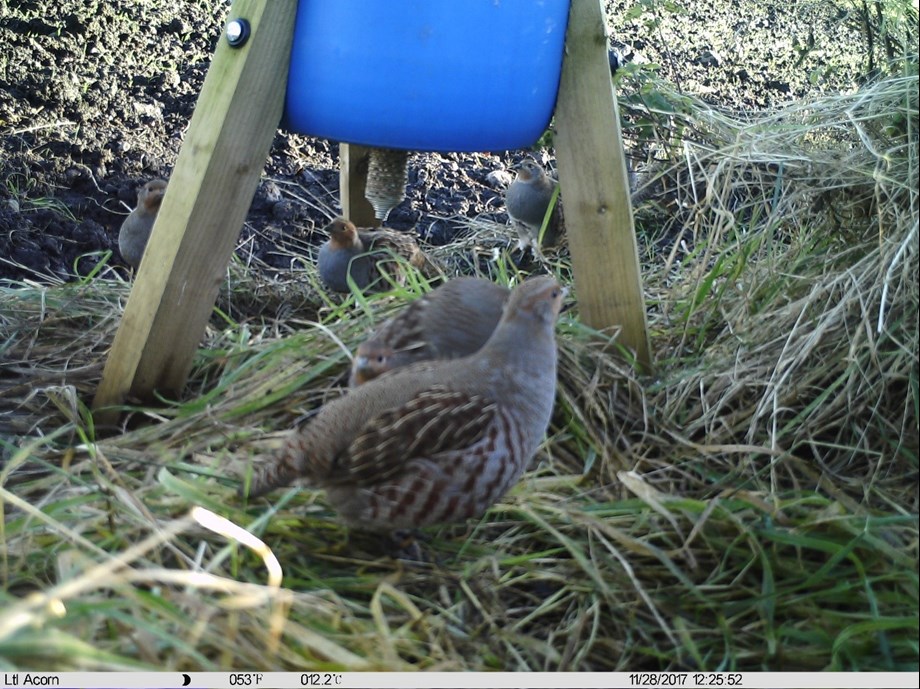 “We introduced grain hoppers to Balgonie to provide additional feeding for Grey Partridges, especially in late winter, which has proved to be very popular!”

All the demonstration sites in the PARTRIDGE project are aiming to convert at least 7% of the farmed area into quality habitats for Grey Partridges. At Balgonie, this process has proceeded smoothly with several blocks of new cover crops added across the 500ha site to bring the proportion converted up to around that 7% mark. These cover crops comprise a mix developed especially for Balgonie by GWCT and Kings. They were first sown in 2018 and established very well under the farm team’s expert supervision, and in 2019 we began the process of cutting half of each plot to create more suitable chick foraging conditions. The other relevant habitats on the farm are hedgerows, grass margins and brood-rearing cover crop sown annually round the edges of the potato fields.

During 2020, the farm focussed on enhancing habitats for pollinators and implemented a number of measures.  Due to the wet 2019/20 winter, areas of previously sown winter wheat failed to establish.  Rather than leaving these areas bare, the farm chose to sow a pollinator mix which provided food for pollinators and other animals, as well as replenishing nutrients in the soil.  In addition to this, the farm trialled sowing various mixes in potato tramlines as a way of investigating how pest predators could be enhanced by using natural methods rather than relying on chemicals.  Lastly, a long-term pollinator mix plot was also sown.  This mix is designed to provide food for pollinators for a number of years and should benefit partridge chicks in particular.

2021 saw a major review of the PARTRIDGE mix that had been in place since 2018.  Although it was felt it was delivering what was asked of it (namely habitat for partridges, hares and other species), it was felt that there was room for improvement.  As a result, an adapted mix was developed, which was sown at lower density, had some species sowing rates adjusted and had more perennial flowers included.  Every block had at least some of its composition resown and some were moved elsewhere.  Again, pollinator mixes were sown both around the potatoes and in the tramlines themselves and two of the PARTRIDGE students completed studies into how they were beneficial to bumblebees and ground-dwelling insects.