The recovery potential and fertilizer value of Iron Coated Sand (ICS) filter granules, saturated with P, was tested in 2018 in a pot trial on 3 plant species (Lavendula, Buxus and Hedera) on PCS Ornamental Plant Research.

ICS was used in a nutrient filter system as filter material for the removal of P from water discharged of a greenhouse where ornamental plants were cultivated and mixed with potting soil.

Because there was no release of P from the ICS granules in the substrate in 2018, a second trial on Hedera was performed in 2019 to test the P-release from ICS by adding phosphorus soluble bacteria (PSB) helping to release the P from the ICS granules. 3 types of PSB’s from 2 companies were drenched pot per pot. One type of PSB was tested at 2 doses.

Remarkable was also the stabilizing effect of the ICS on the pH of the substrate. While the pH lowers in the treatments without ICS, the pH in the treatments with PSB remainsapproximately equal. ICS has also an effect on the K, Mg and Ca concentration. There are higher levels when ICS is used.

At the end of the trial, the highest chlorophyll content was for the substrate without P although these plants had the lowest fresh weight and the lowest rooting score. Adding PSB’s to the substrate had a variable effect and did not really help in releasing the P of the ICS. The positive effect of the higher P in the leaves did not really reflect in a better plant quality, sometimes even the opposite was true.

Furthermore, the effect of adding 30% of saturated ICS granules to the standard substrate was also evaluated in 2019 on range of species. Mixing ICS through the substrate had a negative effect on plant quality for most test species (Azalea, Calluna, Camelia, Chamaecyparis, Chrysanthemum, Erica, Euonymus, Hydrangea, Lavendula, Pelargonium, Petunia, Rhododendron, Thuja and Waldsteinia). Only for Chrysanthemum, mixing 30% ICS through the substrate had a positive effect on plant quality with a bigger plant diameter and higher plants. The fresh weight was also higher for the plants with 30% ICS in the substrate, but there was a delay in flowering.

Unfortunately out of this trials, we learned that using ICS in the substrate as P-source is difficult. It looks like the ICS grains are not a source but rather a sink towards P. It was obvious that the P, available in the substrate, was also absorbed to the ICS-grains which resulted in less P available for the plants. It seems also that it is not really a solution to use PSB’s to enhance the release of the P. 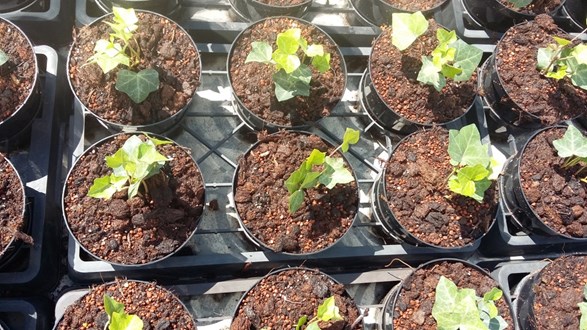