Reuse of Phosphorus as fertilizer

The NUREDRAIN project not only aims to remove P from agricultural water streams but also aims to recover P from the saturated materials. As such, P can be reused as an alternative fertilizer. This is desirable in view of the circular economy approach and taking into account the depleting amount of phosphate rock. 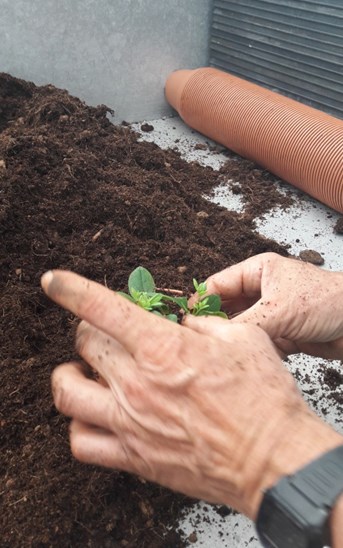 PCS Ornamental Plant Research (Belgium) set up a pot trial in which saturated filter material was mixed with potting soil. The filter materials considered were compressed ferric hydroxide (CFH) and iron coated sand (ICS). CFH had previously been used by Arhus University (Denmark) in a filter setup adsorbing P from agricultural run off water while ICS had been used by PCS to adsorb P from greenhouse effluent. The pot trial with azalea plants revealed that both the addition of CFH and ICS granules to the substrate resulted in smaller plants and a bad rooting.

This indicates that P cannot be released from the materials.

Taking this result into account, pre-treatment of the saturated filter materials (e.g. heat treatment, chemical extraction) will be considered for the next round of pot trials. Furthermore, plants requiring an alkaline environment (e.g. boxwood) will be used instead of azalea. A small setup at a growers site with Chlorophytum already shows promising results.