The Lower Saxony Chamber of Agriculture is involved in field demonstrations at Dümmer lake , the second largest lake (13 km²) in Lower Saxony. The lake suffers from eutrophication which is probably the result of intensive farming in the catchment area (324 km2) and already a matter of public concern since 1972. The large variety of beneficiary interests on lake Dümmer (tourism, water sports, commercial fishing, natural reserve, residents...) predisposes its catchment area as a good study region for NuReDrain and other simular projects.

The Lower Saxony Chamber of Agriculture has developed a filter shaft that collects and filters the nutrient-containing water from a drainage system shortly before it flows into the receiving water. Iron-coated sand is used as the filter material. This is a by-product of the regional drinking water production of the Wasserverband Wittlage. The LWK is testing this filter shaft in cooperation with a farmer on an 8.2 hectare field on the Venner Bruchkanal. 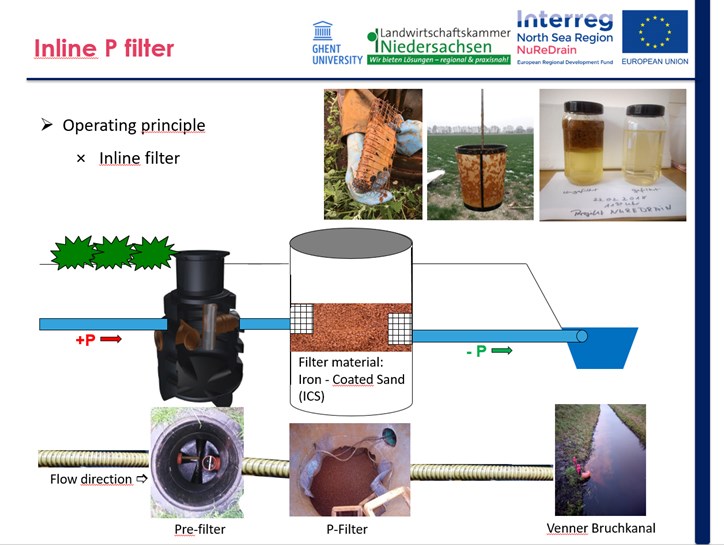 Before and after the P filter, water samples are automatically taken from the drainage pipe every 2.24 hours, 10 times a day. The filter has suffered from clogging due to the presence of ochre flocs. Therefore a pre-filter has been installed to overcome this problem. Despite a good performing filter, no P removal has been observed so far. This is due to a very low P concentration in the drainage water in the current season.