The major influences on the changes and behaviour of ship owners and merchants are market driven.

From the Greeks and Vikings to the British merchants who created the East India Trading Company, shipping has always played a key role in delivering all kind of goods around the world.

Today refrigerated freighters, container ships, car carriers and super tankers transport 90% of the world’s food, products and energy. Thus, the world’s shipping industry has played an incredibly key role and helped transform the global economy along the way. Each year, some 86,000 ships move more than 9 billion tons of cargo – more than a ton for each person on the planet – across our seas each year. 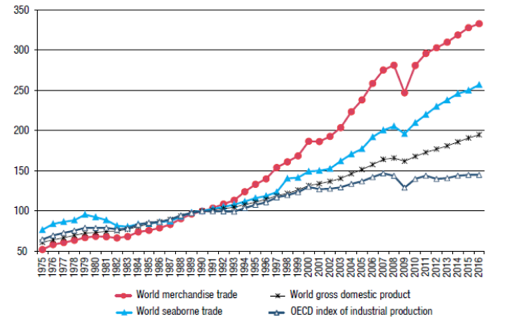 Throughout history the oceans have been important to people around the world as a means of transportation. Unlike a few decades ago, however, ships are now carrying goods rather than people. Since the rise of intercontinental air travel, sea travel has become limited to shorter trips (ferry services across the Baltic and North Seas, the Mediterranean, Japan and Southeast Asia) and recreational cruises. The latter have recently experienced a tremendous boom and represent an increasingly lucrative source of tourist income. As markets became increasingly globalized, shipping volumes soared. From the 1950s to the latest global economic crisis, the growth rate of international trade was almost consistently twice that of economic activity as a whole. From 2000 to 2008 the world trade increased by an average of 5.4% each year, while the economic activity, as measured by the global Gross Domestic Product (GDP), increased by only 3% each year. Due to the spectacular rise of trade vis-à-vis economic growth, world trade since the 1950s has more than tripled to 45% of the global GDP, while goods destined for the processing industry have in fact more than quadrupled.

With respect to the value of the goods, about 23% of world trade is between countries with a common border. This percentage has remained fairly constant over the recent decades. Between continents, however, it differs a great deal depending on their level of development. In Europe and North America the proportion is the highest at 25 to 35 per cent. This trade is predominantly transacted by road and rail. Cargo between countries without a common border is carried out mainly by sea, although increasing quantities of manufactured goods are being forwarded by air. Growth rates for air freight are more than twice as high as those for shipping in recent years. The dominant mode of transport depends on the (relative) transportation costs and the value-to-weight ratio of the goods – the higher the value per unit of weight, the less significant the cost of transportation. Punctuality and reliability are considered more important for valuable commodities. 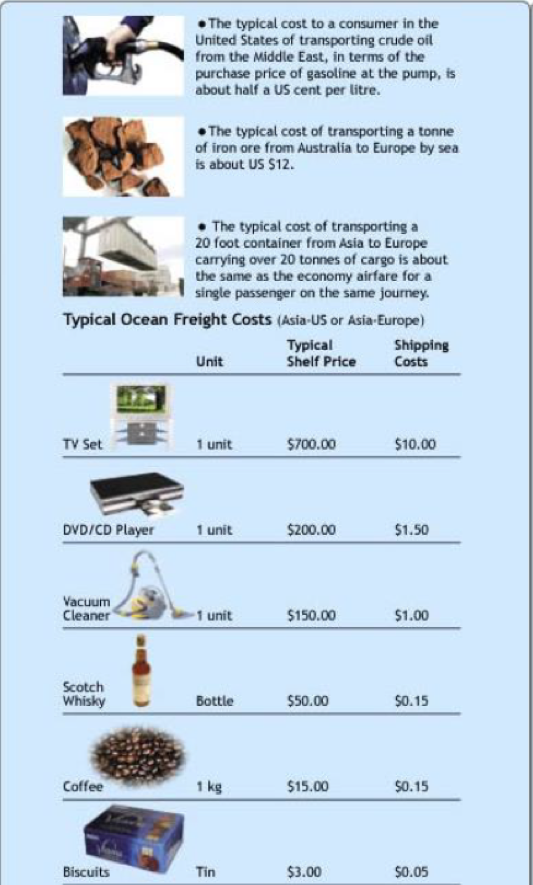 According to research by economists, higher-income households purchase higher-quality products. The residents of wealthy countries therefore tend to buy more quality goods. Accordingly, rising incomes influence the demand for transport in three ways. First, quality goods are more expensive. This means their value-to-weight ratio is higher and the cost of transporting them is lower as compared to their value. Second, as incomes rise, consumers are more likely to purchase expensive products and fancy goods. At the same time, they expect to receive the articles within a very short time. Third, the delivery period in itself is a key element of product quality, having an increasing influence on purchasing decisions; customers are no longer prepared to tolerate long delays. All of these factors have contributed to the even higher growth rates of air freight in comparison to shipping.

“Buying local”, consumers’ appetite for local foods is exploding. Not only has there been huge growth in the number of farm-to-table restaurants and farmers’ markets, but grocery chains and big box retailers are elbowing their way in, aggressively expanding and marketing their locally grown offerings for sale.

Millennials love local: Today’s Millennials value authenticity and locally made products. They are leading the “buy local” movement which has doubled in size in the last 10 years, according to AdWeek. Edelman Digital found 40% of Millennials prefer to shop local, even if it costs more.

Consumers associate local with “fresh”: Nearly all consumers (93%) associate local with “fresh,” the primary purchasing factor for grocery consumers. That might explain why, regardless of the category, 78% of consumers are willing to pay a premium of 10% or more for local food, up from 70% in 2014. Surprisingly, even lower-income grocery shoppers say they (63%) would pay more for local food. The availability of local foods also impacts retailers’ brand loyalty, as almost 30% of grocery shoppers say they consider purchasing food elsewhere if their preferred store does not carry local foods.

Farmers markets: Strong demand for local foods has driven increase in the total number of farmers markets between 1994 and 2013. This explosive growth has prompted suppliers, grocers and restaurants to adapt by adding locally produced food offerings all year round.

Environmental benefits: local foods are produced as close to home as possible. Buying local supports a more sustainable food system by going beyond the methods used in food production to include every step that brings food from farm to plate, first and foremost, transportation. Sustainable agriculture involves food production methods that are healthy - including reduction of pesticide use – balances demand based on local needs, involves less environmentally harmful equipment and practices, and most importantly, reduces impacts on the environment by decreasing transportation needs.

Globalization and localization are both trends, amongst many others, that influence the possible growth of the shipping industry. If we take a look at the growth of the respective shipping market, we might predict some trends for the future.

For almost a decade, the world has struggled to cope with huge changes and challenges brought up by the crash of the financial market in 2008. The resulting issues have not always been dealt with in the best possible way, leaving many large economies still in ‘recovery’ mode.

The full restoration of shipping markets will need several years of solid improvements to lift fleet utilisation rates. Sector overcapacity almost everywhere must be reduced. Governments’ support for any industry – including shipping – which is feeling the heat of global competition, might seem like a good thing. But direct subsidies from governments in fact have a negative impact on the global shipping industry as they affect free trade and undermine the level playing field for businesses.

Global GDP growth is currently driven by service sectors and developing/emerging economies which result in a lower “GDP-to-trade multiplier”, and thus, generate a lower level of shipping demand than we have been accustomed to in the past.

Bigger and better - trend is largely a result of containerization and automation which enables the faster loading and discharging of vessels. Since the beginning of this trends, ships have become bigger and longer. Only a few years ago, ships of 10.000 TEU were science fiction. Today, ships of 20.000 TEU are sailing our waters. Every year new plans are created to outsize the currently available megaships and apparently the sky is the limit. However, the sky at sea might be the limit, the ports aren’t. These ships find more and more difficulties to enter ports, because of limited maneuverability or draught. 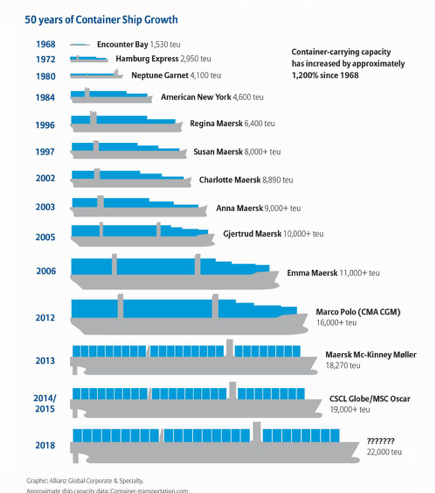 This trend will most likely continue. The new container ships from CSCL (China Shipping Container Lines), which at 19,100 TEU look set to surpass Maersk Line's Triple-E series, which will not be the world's biggest container ships for long. The 22,000 TEU container ships that industry rumours say are underway will also not be able to hold this position for long. This is because there are even bigger ships on the way to the world seas, and these behemoths will be able to carry 24,000TEU, according to Lloyd’s Register.

The next generation of giant ships will of course also bring certain challenges, e.g. with regard to technic. The ships can be built in a highly functional way but may create problems in the port terminals. For instance, the massive ships would be able to transit the Suez Canal in terms of draft, but there is a bridge that spans the canal and the ships would likely have difficulties getting under this.

Several ports will experience problems related to draft, for instance, in the Port of Hamburg where the river Elbe is constantly dredged to make room for the new ultra-large vessels that are already sailing the world seas.

Although the limits might be reached as the possibility to react flexible on market changes reduces with size. According to Maersk Line CEO Søren Skou, the ships could become so big that their size could seriously weaken their flexibility, especially in terms of ports and call options, and that this could water down the potential unit cost reductions that could be gained from using bigger ships.

For the next few years, ports and authorities must be prepared for more and bigger ships. According to Lloyd’s register, more than 60 mega ships, with lengths over 400m, are being built at the moment.

The trends of possible limits of the access of large container vessels into ports show a possible growth of short sea shipping. Large container vessels will make berth in major hubs like Rotterdam. For the transportation of the goods, further inland or to other smaller ports, smaller, more fuel efficient vessels can be used. These vessels will naturally use shipping lanes that are closer to shore. 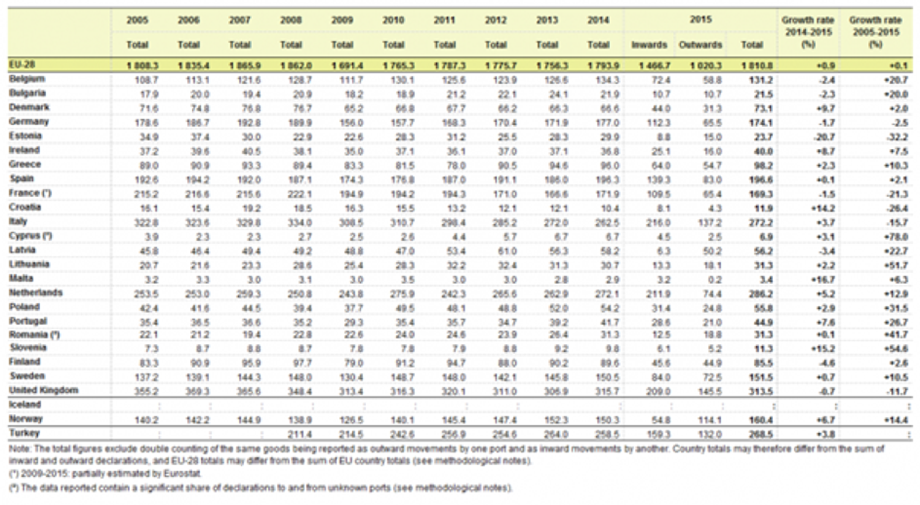 These statistics show a slow increase of Short Sea Shipping over the last 10 years. However new technologies and new strategies of the ship owners suggest an even larger increase over the following years.

Over the past decades short sea operators have been investing heavily in the greening of their fleets. Considerable resources and efforts are spent on innovative, green vessels and techniques.

Ferries often remain in a port for an average of six hours and during this time electricity is necessary to run on-board systems, such as heating and galley equipment.