Autonomous vehicles are found in all transport sectors. There are autonomous aircrafts reaching from military drones to civilian drones that are being used for transportation of goods, as well as autonomous automobiles such as unmanned busses used at airports and in city centres or car companies that are experimenting with driverless cars. In the shipping industry, there are already a range of smaller unmanned vessels sailing around. The military uses unmanned underwater vessels for patrolling and minesweeping, autonomous research vessels scan the sea bottom, and windfarm constructors use unmanned underwater robots for cable laying. However, so far there are no bigger unmanned cargo vessels sailing over longer distances. This is about to change.

The Danish Maritime Authority is also working with the Technical University of Denmark on research, while UK-based Automated Ships and Norway’s Kongsberg signed a memorandum of understanding in early November to build “the world's first unmanned and fully-automated vessel for offshore operations”.

Lloyd’s Register (LR) has set out what is required to class an autonomous ship in its ShipRight design assessment procedure guide.  This guidance will help transform autonomous shipping from a theoretical possibility to a practical reality

LR has proposed six autonomy levels (ALs) for shipping, depending on the technology, systems, and operating procedures involved.  These levels should provide clarity to shipping stakeholders about the specific requirements of different automation strategies.

The 6 levels range from AL1 for ships with data collated for on-board decision making, through to AL6 which denotes a fully autonomous ship with no access required during a mission.  These should help designers, shipbuilders, equipment manufacturers, and ship owners to accurately specify the desired level of autonomy in designing the ship and for ongoing operations and maintenance. AL1 and AL2 are already operational. AL3 an AL4 are being built at the moment and will sail the North Sea within a few years. AL5 and AL6 are the most uncertain, but it is expected that these kind of ships (on a commercial level) will be reality within 10 to 15 years.

One of the major issues regarding unmanned vessels is the lack of clarity of the current legislation. International treaties like UNCLOS, SOLAS, COLREG, do not have specific articles on unmanned vessels.

Safety rules emerged in 1914 in the wake of the sinking of the RMS Titanic two years earlier, which killed more than 1,500 passengers on the ship’s maiden trans-Atlantic voyage. Current rules, completed in 1974, have been adapted for new technologies such as introducing mandatory requirements for electronic charts and automatic identification systems for ships. Proponents of greater autonomy hope the rules may be further relaxed.

If you want to develop legalisation regarding unmanned vessel, the first discussion that rises is the definition of an unmanned ship. Numerous different international maritime law conventions apply their own tailor made definitions of a ship.

The lack of legislation slows down the process of developing and deploying unmanned vessels. Ship designers cannot be certain how to design a ship if they do not know which safety code or building regulations apply to them.

Besides the questions of legislation, it is not yet clear how security issues like piracy and the mandate to help distressed ships will be addressed for autonomous ships. Another problem is the level of control on an autonomous vessel, should it be necessary to make radio contact with someone who is in control of an unmanned vessel.

Does the Collision Regulation Convention also apply to unmanned vessels? Two unmanned vessels will agree on who does what, when they are on a collision course in a split of second. They don’t need regulations.

Currently, the member states of the International Maritime Organization are working together with the industry to solve these issues, however, this process takes several years. Ship owners will not wait this long and this implies there might be a gap in regulations when the first unmanned ships sail at sea for commercial international voyages.

Platooning with cargo ships: a train of ships in which only the front ship is manned, while the others follow autonomously. 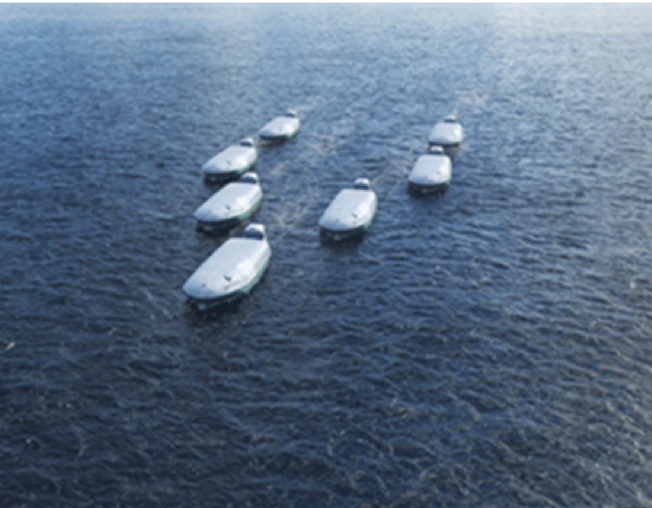 Platooning is not a new phenomenon at sea but it is likely to become more frequent once autonomous shipping is in place.

In the age of autonomous shipping platooning will be characterized by a fleet of unmanned vessels that will be guided by one (manned) leader vessel. This technic could be used for crossing the oceans, but most likely will be used to enter ports that are more inland, like the port of Antwerp or Hamburg.

Ships nowadays need a pilot to come into port because of the difficulties of large ships entering relatively narrow rivers that captains face. With platooning, only the first vessels will need pilotage, and the others will follow its lead. Ports that are willing to invest in advanced pilotage and other sophisticated aids to navigation will attract the unmanned vessels first.

This development in platooning is likely to have an impact on MSP as national authorities must foresee anchorage space for unmanned vessels, away from traditional anchorage, to form vessel associations.

Unmanned vessels do not require the same services as manned vessels when coming into ports. They need a set of specialized services, perhaps even specialized quays to dock. But most of all they need specialized Vessels Traffic Services and aids to navigation, like piloting from the shore.

Canadian naval architects Robert Allan Ltd have unveiled a revolutionary concept with their vision of an autonomous unmanned tug, named RAmora and the flagship of their TOWBoT (Tele-operated Workboat or Tug) series. 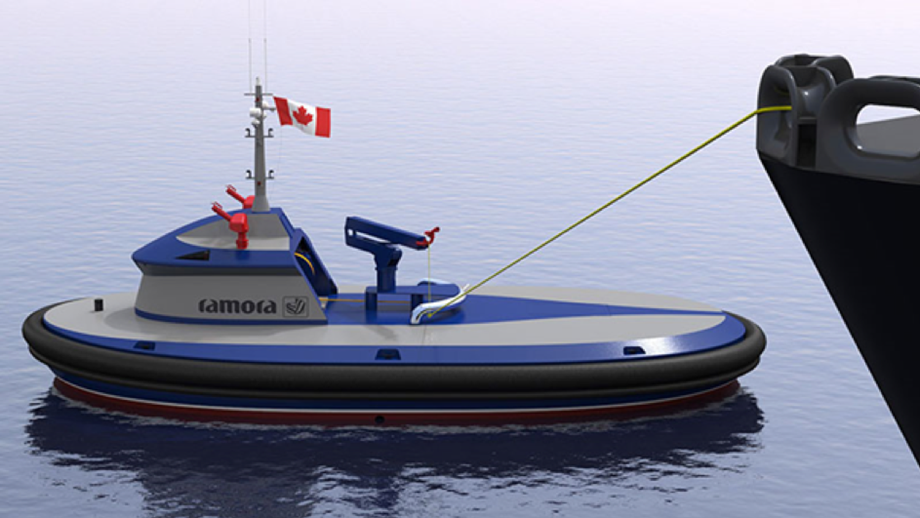 The idea of taking humans away from the scene of operating machinery is nothing new of course. Unmanned autonomous vehicles and drones are examples and in the port world Rotterdam’s Maasvlakte 2 container terminals are largely automated, their ship-to-shore gantry crane operators located in a building remote from the cranes themselves.

The tragic capsizing of the tug Fairplay-22 in the Nieuwe Waterweg in 2010 with the loss of two lives serves as a reminder of the dangers involved in operations carried out hundreds of times a day in ports around the world. The possibility to reduce the risk for tug crews is a strong incentive for what to some may appear just a little too futuristic.

There is no talk about unmanned transportation without touching the issue of cybersecurity. Cybercrimes are flourishing. As technology continues to develop, information technology (IT) and operational technology (OT) aboard ships are increasingly being networked together – and more frequently connected to the worldwide web. This brings the greater risk of unauthorised access or malicious attacks to ships’ systems and networks. Risks may also occur from personnel having access to the systems aboard, for example by introducing malware via removable media. Ships are also exposed to interference through electronic navigation devices such as the Global Positioning System (GPS) and lack the backup systems airliners have to prevent crashes.

Ship operators might not know they have already been hacked. Cyber-attacks are more widespread than the shipping industry realise. 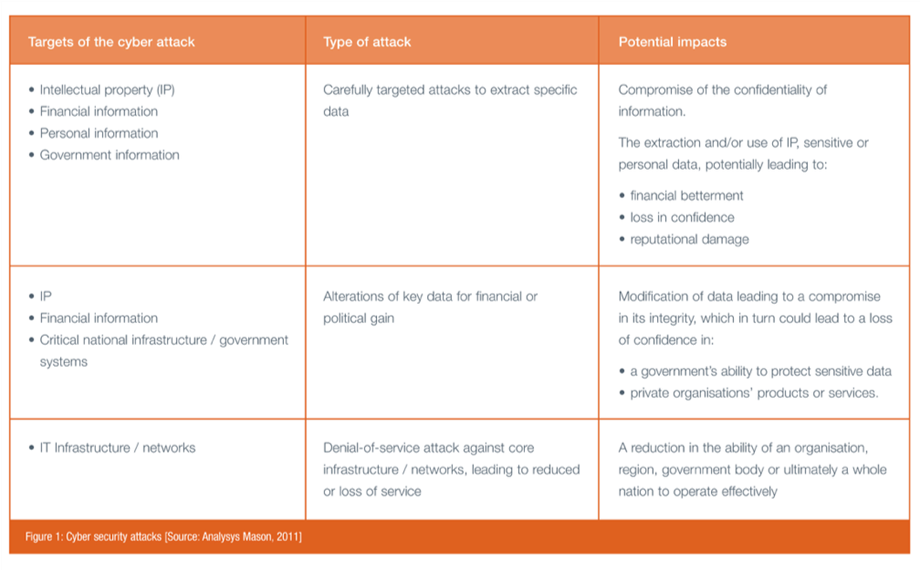 In general, there are two categories of cyber-attacks which may affect companies and ships:

The industry NGO’s like Bimco work together with IMO to develop guidelines on cyber protection of vessels.

Cyber security has no effect on MSP, but might slowdown the process of developing unmanned vessels.

The technologies to design unmanned vessels (even large cargo vessels) already exist. However, the ambiguity of legal status, the economic feasibility, the interaction with manned vessels, and cyber-attacks are all factors that have slowed down the process of developing operational unmanned vessels.

But industry is working together with international organizations to overcome all difficulties and within a few years, the first larger unmanned cargo vessels will set sail. According to the scale of level of autonomy by Lloyd’s Register, we will see ships with a minimum crew first. These ships are already being built. Within 5 to 10 years, we might expect vessels with no crew, but completely controlled by shore. The fully autonomous vehicle with artificial intelligence still sounds like science fiction, but will be possible in the future.

Ports that are willing to adapt to this new trend, with adequate services, will have the benefit of operationalizing these vessels first.

The effect of unmanned ships on MSP can be enormous. Specially dedicated routes, solely used by autonomous ships, special anchorage areas, adapted aids to navigation, can all have an impact on spatial planning.

It is however very difficult to take this trend already into account while planning the MSP’s of today, because most MSP’s are plans for only a few years. Taking into account unmanned vessels sailing around on a commercial level needs a long-term planning of an uncertain development