MSP Challenge Aberdeen gets the regional energy stakeholders on board!

08 October 2018 - Published by Nico Nolte
The NorthSEE project hosted an energy workshop in Aberdeen, Scotland on 3rd and 4th of October 2018. The event was well attended by NorthSEE project members and a range of other participants such as the North Sea Commission Energy and Climate Change Group, Planning Authorities and Councils from around the North Sea and energy industry representatives such as offshore wind and floating wind developers, interconnector developers and carbon capture and storage consultants. The aim of the workshop was to discuss the future of offshore energy in the North Sea from an MSP perspective. The focus was also on validating the results from the energy status quo report published by the energy work package on future energy industry trends, spatial requirements, incompatibilities and spatial solutions. As part of the workshop, participants took part in the MSP Challenge Game which is a novel stakeholder engagement tool used to mimic the real-life decisions of marine planners.

On the first day of the workshop, the participants played the board game version of the MSP Challenge which is the introduction to the concept of maritime spatial planning. Each player was assigned a role and responsibility for a particular stakeholder and must make planning based decisions in consultation with other stakeholders. This involved placing tiles on the board game which represented different marine users or activities. The overall game challenge was to implement 50 offshore wind farm tiles across the board whilst taking into account other marine users. This  sparked lively discussion and interaction between all players creating a great energetic atmosphere to the game. On the evening of the first day, all participants were invited to a dinner in Aberdeen which was very enjoyable.

On the second day of the workshop, participants played the electronic version of the MSP Challenge Game which has similar principles to the board game but on a more complex level. It gives a more real-life insight into maritime spatial planning and is backed by ecosystem modelling to show the environmental impact of the player’s planning decisions.

Overall, it was a very successful event with lots of positive feedback from the participants. The event was also recorded by a videographer and a video will be produced showing the game play and interviews by some familiar NorthSEE faces so please keep a look out for it. Video coming soon… 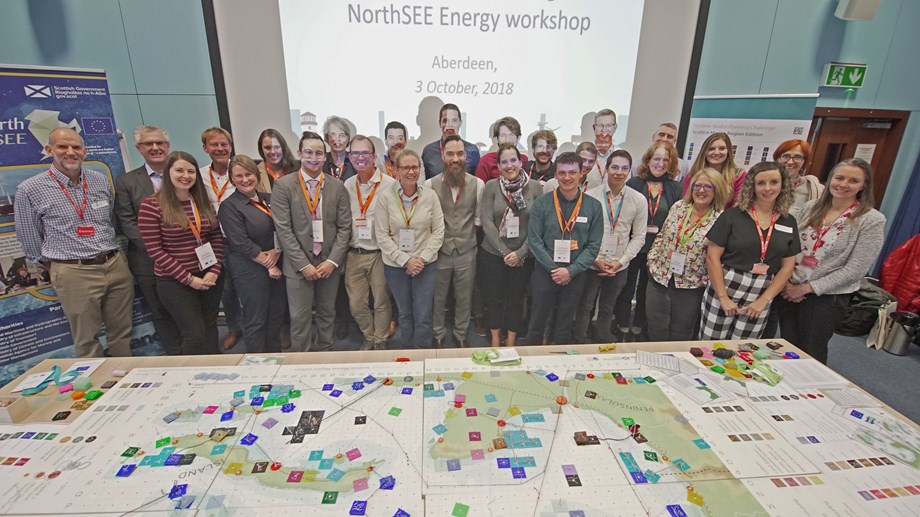 The event has been described on VisitScotland which is Scotland’s main tourism website. Visit Scotland are running a campaign called ‘marine legends’ and the session provided a concrete example of interesting marine science events and project that Scotland is involved in.