18 December 2018 - Published by Nico Nolte
The NorthSEE project is focusing on transnational coordination between plans and planning processes in the North Sea Region on three main topics: Energy, Shipping and Environment. For the environmental strand the partners have been researching the designation of Marine Protected Areas (MPAs) and other marine conservation measures, as well as the application of the Ecosystem Based Approach (EBA) in the planning processes. A new study has been published as part of the WP3 environment and deals with the connectivity of MPAs in the North Sea. The reasons for doing this study is that the North Sea ecosystem is interlinked and does not respect land borders. In Maritime Spatial Planning (MSP), it is important to understand the way in which a marine conservation site is relevant to areas elsewhere, and what significance different sites may have for the ecosystem as a whole.

Another incentive for analyzing the ecological coherence, is that the OSPAR Recommendation 2003/31, amended by OSPAR Recommendation 2010/2, on a network of Marine Protected Areas (MPAs) sets out the goal of OSPAR Contracting Parties (CPs) to continue the establishment of the OSPAR Network of MPAs in the North‐East Atlantic. In the status report of 2016, OSPAR identified the need for using case‐studies of connectivity to illustrate how the use of life‐history traits information in combination with oceanographic modelling products can improve confidence in MPA network connectivity assessments.

This study meets the need described by OSPAR. In order to have a better understanding of ecological relationships and conditions, the connectivity between all marine protected areas (MPAs) and particularly valuable and vulnerable areas (as part of the Norwegian Management Plans), have been analyzed. This was done by applying a state-of-the-art biophysical model that represents the pelagic dispersal stage of a range of marine organisms approximated by passive drift. The larvae of lesser sand eel (Ammodytes marinus) were used as model species.

The study was initiated and financed through the NorthSEE project on request of the Norwegian Environmental Agency (NEA/Miljødirektoratet) and was carried out by the Norwegian Institute for Marine Research. It can be downloaded from the project output page, as well as here

Summary of the results

The network here can at first glance be perceived largely as an empty network, as reflected in either a lack of management plans or lack of reporting of such plans for the majority of MPAs that constitutes the network. Yet, should the participating countries decide to fulfill the OSPAR objective of a well managed network of MPAs and consequently give some level of protection within the MPAs, our ad-hoc analyses revealed a well-designed and highly connected network, where dispersal of pelagic larvae from the network may potentially supply almost the entire greater North Sea and Celtic Seas region with larvae.

At the same time there were some areas along the edge of the European continental shelf that did not receive larvae from MPAs–however, it is debatable whether MPAs as management tools would be effective within the open and highly advective environment found along the edge of the continental shelf, as the mobility of species spawning there is high (e.g. blue whiting, mackerel, saithe, hake, and cod), and their long egg and larval stage duration results in a vast dispersal potential; in which case effects from MPAs are not readily discernable from environmental variability.

The study presents recommendations for conservation priorities in the event that conflicting interests might arise where the integrity of the network could be questioned or further conservation measures (e.g. fishery closures) considered. Should one nominate areas where placement of further MPAs should be considered, we would recommend striving to create redundant dispersal pathways between the Celtic Seas and greater North Sea regions. This would mainly involve establishing new MPAs along the Irish western coast within the Irish Coastal Current, and along the edges of the Fladen Ground in the path of the Fair Isle Current. 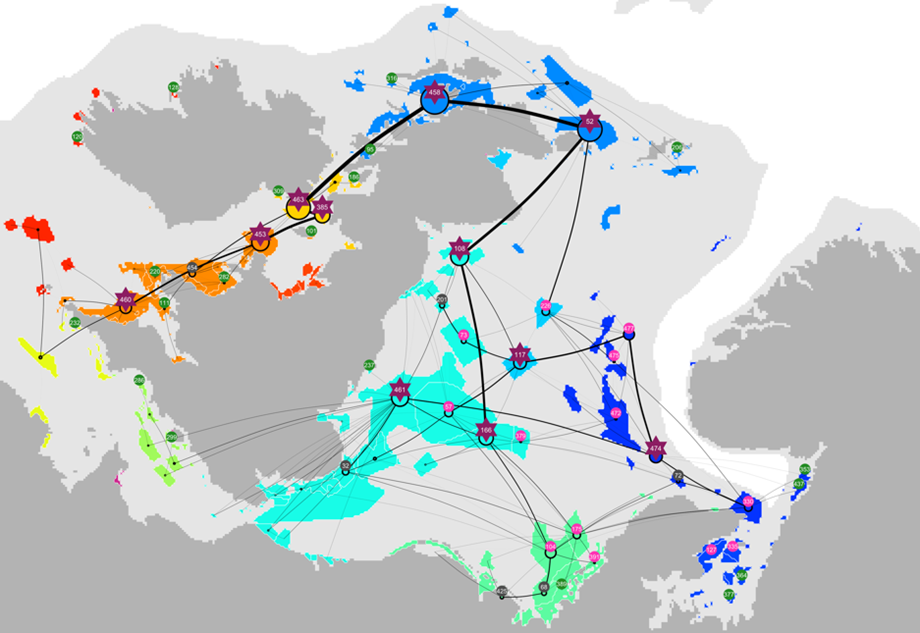