There is a long tradition of regional energy cooperation in the North Sea. The institutional framework of North Sea energy cooperation over the recent years included regional sea basin mechanisms and organisations, multi- and bi-lateral energy declarations and agreements, energy trade bodies and stakeholder forums with sea basin interests, as well as European projects looking to promote the sustainable development of offshore energy in the NSR.

The CPMR North Sea Commission is a cooperation platform for regions around the North Sea. The Commission’s work aims to exploit opportunities and address common transnational challenges in the NSR. Implementation work is delivered by thematic working groups, such as the “Energy and Climate Change” and the “Marine Resources and Transport” groups.

NSCOGI was established in 2009 as a regional cooperation of 10 countries around the North Sea. It aims to achieve the renewable targets up to 2020 and seeks to evaluate and facilitate coordinated development of a possible offshore grid in the North Sea, that maximises the efficient and economic use of renewable sources and infrastructure investments. NSCOGI includes a working group on permissions and planning which develops guiding principles such as the development of integrated offshore cross-border infrastructure.

The North Seas Energy Cooperation was formed in 2016 where North Sea countries (Belgium, Denmark, France, Germany, Ireland, Luxembourg, the Netherlands, Norway and Sweden, and later also the UK) agreed to further strengthen their energy cooperation to improve conditions for the development of offshore wind energy in order to ensure a sustainable, secure and affordable energy supply in the area. One of the specific energy cooperation work areas is Maritime Spatial Planning and the outputs of this group will be brought to a political level.

Ocean Energy Europe (OEE) is the European ocean energy association of professionals that represent the interests of Europe's ocean energy sector. The aim of OEE is to create a strong environment for the development of ocean energy, improve access to funding and enhance business opportunities for its members. To achieve this, OEE engages with European Institutions such as the Commission, Parliament and Councils and national ministries on policy issues affecting the ocean energy sector. OEE has been largely successful in the past four years by significantly increasing the profile of ocean energy, which in turn has encouraged the EU to be a major driver of the industry

The European Network of transmission system operators for electricity (ENTSO-E_ has created a Ten-Year Network Development Plan 2016 (TYNDP 2016). The 2016 edition of the TYNDP builds on the 2014 edition and offers a view on what grid is needed where to achieve Europe's climate objectives by 2030. As part of the TYNDP 2016, Regional Investment Plans were developed from September 2014 to June 2015 for six regional groups for grid planning in Europe, including the North Sea region. These reports include the main infrastructure challenges and needs of every region in Europe by 2030.

EU-funded projects offer a great opportunity for North Sea countries to cooperate on matters of transnational importance, including offshore energy. Since 2010, a total budget of over 15 million euro has been invested on energy cooperation projects of direct relevance by the Europe Commission, via the European Regional Development Fund, EASME’s Intelligent Energy Europe programme, and the Directorate-General for Energy 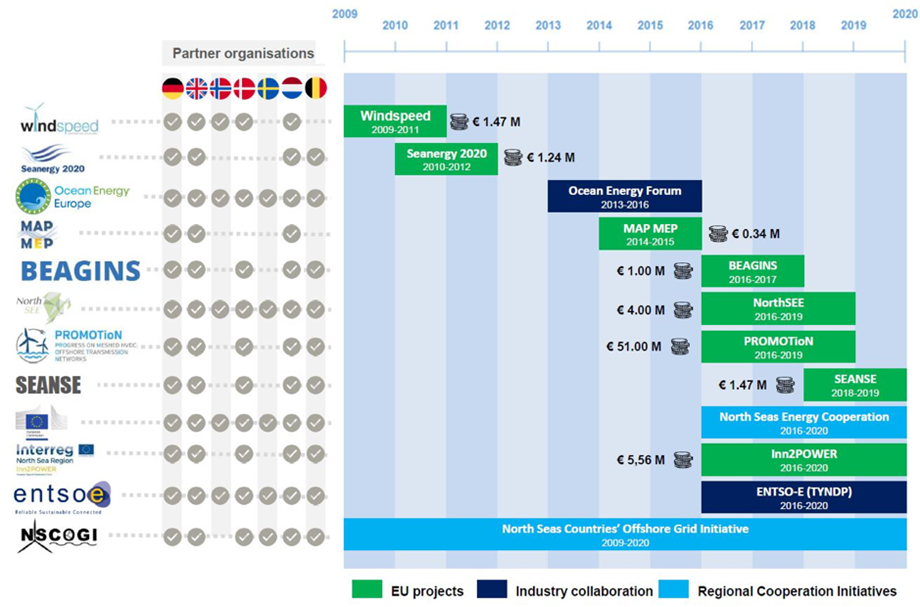 In the early 2010s, European projects emphasised on making the case for the North Sea’s potential in offshore energy, notably offshore wind.

The WindSpeed project was one of the first technical projects, back in 2010, to establish a spatial inventory of wind potential in the central and Southern North Sea. The project delivered a roadmap which identified barriers and potential surplus conditions in the North-European electricity grid, defined a realistic target for the spatial deployment of offshore wind in the North Sea and developed a development pathway up to 2030.

Following this technical project, SEANERGY 2020 project was undertaken with a focus on policy. In 2012, the project developed policy recommendations to remove MSP obstacles that could hinder the development of offshore renewable plans in the EU, explored the development of existing and potentially new international MSP instruments, and identified inconsistencies between international MSP processes.

Next, the MAP MEP project delivered an interactive energy map for the North Sea in 2015, which provided a direct overview of up-to-date energy information in the region. The interactive map offers insight of the energy potential of the NSR for wind, wave and tidal renewable energy and fossil fuels.

By the mid-2010s, the development of an offshore energy system in the North Sea had been recognised as a significant opportunity towards meeting the EU's energy, environmental, growth and employment objectives. To ensure that environmental concerns and impacts are appropriately considered in the development of such an offshore energy system, the European Commission ordered the BEAGINS study in 2016, which compiled an Environmental Baseline of impacts including maps, constraints, risks, impacts, ways of mitigation and alternatives [8].