The role of MSP for grid development is to ensure effective routing, configuration and location of offshore linear energy infrastructure such as cables, offshore converter platforms and onshore grid connections. MSP can help by identifying areas of least constraint to locate cable corridors which match up offshore energy resource to suitable grid connection points on land, whilst carefully routing around environmentally sensitive areas. The challenge is the massive expansion in renewable energy sources to meet energy and carbon reduction targets. A number of these renewable projects will involve the creation of new international electricity transmission capacity and will require extensive coordination between different national systems if they are to develop to their full potential.

The role of MSP for grid development

Transnational cooperation is an important factor to MSP and is especially important for grid development and interconnectors. Transnational interconnectors are typically large, complex projects with high investment costs and lengthy project development timescales. They are based on governmental decisions on investments and exposed to different licensing procedures in various countries. Shared knowledge and understanding of NSR countries MSP planning provisions will ease the process of establishing new transnational energy grid infrastructure.

Cables not only cross national borders but also cross the land-sea interface from the marine to terrestrial environment. They are the transmission infrastructure which joins up offshore energy generation to onshore energy distribution. This requires not only an understanding and consideration for the different planning processes between marine and terrestrial but a stronger link for cooperation and coordination. For example, there needs to be identification of viable grid connection points and terrestrial sites for land-based converter stations early on in the planning process to enable cable efficient routing. Terrestrial planning can also aid marine planning through investments in transmission capacity on land to meet the requirements for offshore renewable energy. For example, Germany are improving onshore grids in the south of the country which are well-situated to transport renewable energy from their offshore wind farms to their areas of highest energy demand.The grid designs should contribute to identify and potentially mitigate bottlenecks in the onshore grid system and facilitate the greater integration of electricity markets in the region.

MSP will also play a major role in the future planning of grid development. Cables have a very long life (40 to 50 years) therefore the decision on their location is critical in relation to ensuring that energy resources are efficiently utilised and environmental footprints are reduced. It is therefore important that investment decisions are also made for the long term and should be thoroughly prepared and planned. MSP will also become more important as coastal space in the (southern) North Sea becomes more congested, priority planning and spatial designations (e.g. cable corridors) will be required.

The overall aim which has been the ambition for several decades is the development of a North Sea offshore grid which interconnects all NSR countries and helps meet EU targets for an integrated internal energy market, facilitating the flow of energy across borders. Due to the transnational dimension, optimal expansion of an offshore grid is best considered from a transnational perspective rather than at a national level, which is the current situation. There are some notable enabling conditions that are likely to be required for the development of such an offshore grid. Significant improvements in cross-border cooperation would be required in order to ensure compatibility and coordination of national OWE plans with the necessary grid-infrastructure. At the same time there would need to be well defined and centralised responsibility for developing the post 2020 offshore grid.

The establishment of the NSCOGI was an important first step towards increasing coordination efforts in order to establish appropriate offshore grid infrastructure for OWE and this will be continued through the Political Declaration. However, to plan an optimal grid design for OWE in the North Sea basin, knowledge is needed on the quantities and location of offshore wind parks in the medium to long term [15]. This knowledge is best acquired through an integrated planning approach based on a long term target or vision for OWE across the NSR.

The level of renewable generation, in particular, the level and location of offshore renewables in projections, is likely to be the parameter with the most significant impact in determining offshore grid configurations and planning. Examples of configurations suggested by industry include: radial, meshed, hub/interconnector approach or the integrated approach [16], as seen in Figure 15. 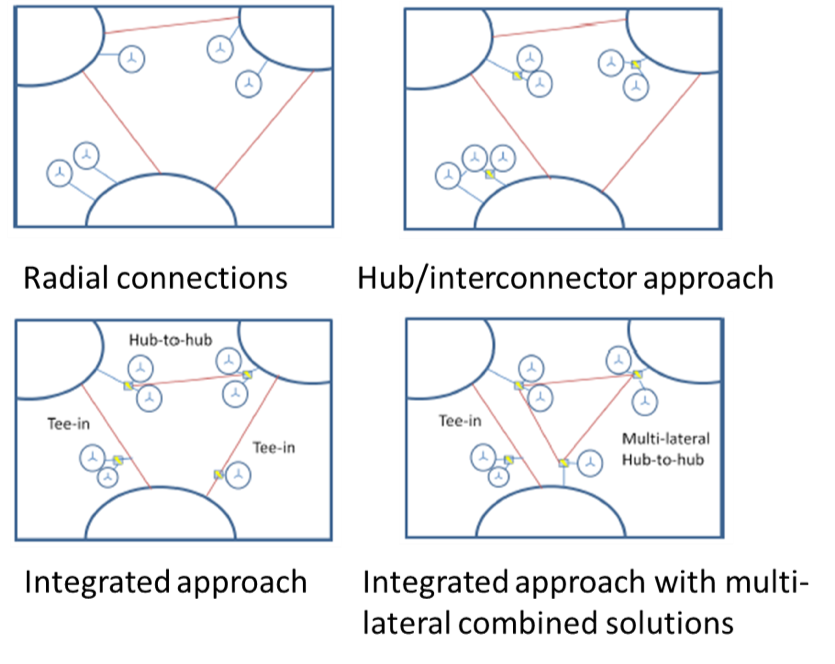 To date most wind parks in the North Sea have been connected to shore by an individual electricity cable a so-called ‘radial’ connection. This type of connection is characterised by a limited need for coordination. The fact they are so widespread can be attributed to the ad hocinvestment decisions in individual offshore wind projects in the past decade and their relative vicinity to shore.

Another approach to grid development is the ‘hub/interconnector approach’ which includes both radial offshore wind park connections and more coordinated form of offshore wind connections, in the form of hubs, and furthermore involves an expansion of the offshore cross-border electricity transmission infrastructure in the form of interconnectors. With the increase in the number of offshore wind projects and the fact that these are increasingly located further offshore, the need for local coordination has grown. This has given rise to the formation of hubs, which are offshore substations that connect multiple wind parks and bring their combined energy to the onshore transmission system through a single power cable. In the hub/interconnector approach, the interconnectors can be seen as the building blocks of a North Sea Offshore Grid, connecting the electricity grids of the North Seas countries with one another. The hub approach as already been implemented in the Netherlands, Germany and Belgium, though still from a national perspective with the hubs being directly connected to shore. No hubs are planned yet in the NSR where wind farms from different countries link in [23].

The second approach to developing a North Sea offshore grid is the ‘integrated approach’. In addition to radial connections, hubs and interconnectors, the integrated approach also includes combined solutions, which connect an offshore wind park or hub directly to an interconnector. These are more novel and innovative solutions have gained attention, as they could potentially prove to be a more economical means of connecting offshore wind parks. Needless to say, the development of combined solutions would require a high level of international coordination.

There is an increasing need to understand the current and future spatial demands for grid development and associated submarine cables in the NSR. Marine planners are faced with the need to accommodate those cable systems already in service as well as the growth of new connections and networks that are being installed to serve new and essential energy generation and distribution policies. Due to their inherent linear nature, and requirement to connect to the high-voltage grid, interconnectors pose challenging spatial questions. Cables are not as space-intensive as offshore wind farms, however they require careful routing with innovative solutions (e.g. cable corridors), they require further international attention (particularly in the cases of interconnectors), and they have an important role to play in MSP as they significantly influence (and are influenced by) where the next offshore wind developments will be sited.

Restrictions on space for cables appears to cause similar conflicts around the North Sea, with some site-specific cases. The main conflicts are with fishing, shipping, renewable energy developments, mineral extraction and defence.

Fishing vessels such as trawlers and other vessels with bottom-contact fishing methods come into conflict with cables that have been surface laid and not protected by cable protection measures through snagging. This poses a significant safety risk to the vessel and can also risk asset integrity. There are also similar conflicts with shipping, where in the Netherlands, for example, ships of certain size are not allowed to anchor where there are cables or pipelines as they could damage the cable. However shipping lines should be considered in grid planning and avoided if possible.

Mineral extraction is a particularly important marine industry in the Netherlands andsand reserves are largely situated close to shore making it challenging to plan cable routes to shore.However sand is not allowed to be extracted where there are cables and pipelines located and conflict arises when cables are routed through these areas to connect to the grid. It is therefore essential during the planning process for laying new cables that efforts are made to avoid important sand extraction areas. There should also be consideration of grid connection points on land during planning to match up with preferred routes. Routing cables through some sand extraction areas is possible if they are depleted or less attractive.

There are numerous environmentally sensitive areas including protected habitats and site designations within the North Sea and routing cables around these is a major challenge. The BEAGINS study which is previously mentioned in section 1.6which aims to ensure that environmental concerns and impacts are appropriately considered in the development of an offshore energy grid system in the North and Irish Seas, has investigated the International and European Protected Sites intersected by Radial and Meshed Grid solutions based on the different scenarios also mentioned above [23]. They compared both radial and meshed associated grid infrastructure such as grid, hub and landfall and found that all 3 meshed grid infrastructure intersected the protected sites less that the radial grid infrastructure on all accounts except for a few instances for the hub [23]. The study also found that radial connections presented the greater potential for impacts on the environment due to the lengths of cables for individual connections, a greater number of landfall points needed and no integrations of existing grid infrastructure. On the other hand, the meshed or integrated approach may require a more localised concentration of infrastructure however it would allow existing grid options to be utilised, meaning less cabling. This means that there would be less of an environmental footprint or exclusion to other maritime users. However this is dependent upon the studies proposed mitigation measures such as applying good siting and routing guidelines. These findings support the movement towards a more integrated and meshed offshore grid in the NSR.

Another issue for planning of grid in the future could be that the onshore grid connection causes a bottleneck. This might cause issues in some countries to find landing points as well as routes in the territorial sea, especially for a higher demand of offshore windfarms in the future. In some areas, e.g. the national park Wadden Sea in Germany, the possible corridors for offshore grid connections are limited and cables are already bundled to save space. This might result in some issues with transportation of energy produced from offshore to onshore. Also for consideration in some countries is the change in energy production. For example, in Germany the network expansion on land is another bottleneck. The energy transition has resulted in grid expansion from the North to the South of Germany. This shows the significance of capacity in the onshore grid to handle the higher offshore as well as in general renewable energy production. It also shows the important role that onshore grid connection as well as the onshore grid capacity plays for future grid developments.