In general, offshore grid infrastructure has already been under development for several decades, and will continue evolving. Already, ambitious offshore grid initiatives and projects in the region are ongoing. These initiatives include: - Collaborations at a political level; - New research projects; and - Industry level collaboration on visionary projects.

The Electricity Regional Initiatives Project was launched in 2006 as an interim step to speed up the integration of Europe’s national electricity markets [10]. The initiative was launched by the European Regulators Group for Electricity and Gas (ERGEG) and aimed at bringing together national regulatory authorities (NRAs), transmission system operators (TSOs) and other stakeholders in a voluntary process to advance integration at the regional level as a step towards the creation of a well-functioning Internal Energy Market (IEM). The regional initiatives represent a bottom up approach to the completion of the IEM, in the sense that they bring all market participants together to notably test solutions for cross-border issues, carry out early implementation of the EU acquis and come up with pilot-projects which can be exported from one region to the others.

The Agency for the Cooperation of Energy Regulators (ACER) is an EU agency which was created by the Third Energy Package to further progress the completion of the internal energy market for both electricity and natural gas [11]. When it launched in March 2011, ACER changed the regional initiatives scope to fit a new vision surrounding improved involvement of all Member States and stakeholders that will help the regional initiatives to make a stronger contribution to move from national or regional markets to an integrated IEM [12].

An example of regional cooperation in the North Sea was The North Seas Countries Offshore Grid Initiative (NSCOGI) which was a framework for regional cooperation to find common solutions to questions related to current and possible future grid infrastructure developments in the North Seas. Under the initiative EU Member States are encouraged to work together, with energy regulators, the European Commission and Transmission System Operators to explore the potential for the coordinated development of offshore grids in the North and Irish Seas.

The NSCOGI was formed as the responsible body to evaluate and facilitate coordinated development of a possible offshore grid that maximised the efficient and economic use of those renewable resources and infrastructure investments. The Memorandum of Understanding (MoU) was signed on 3 December 2010 by the 10 countries (Belgium, Denmark, France, Germany, Ireland, Luxembourg, the Netherlands, Norway and Sweden, and later also the UK)  (Figure3) around the North Seas represented by their energy ministries, supported by their TSOs, organised in the European Network of Transmission System Operators for Electricity ENTSO-E), their regulators (organised in the Agency for the Cooperation of Energy Regulators ACER) and the European Commission, together forming the "North Seas Countries' Offshore Grid Initiative (NSCOGI)". This was the first time that these different stakeholders joined forces, which at the time, indicated the topic’s importance on the European energy agenda. 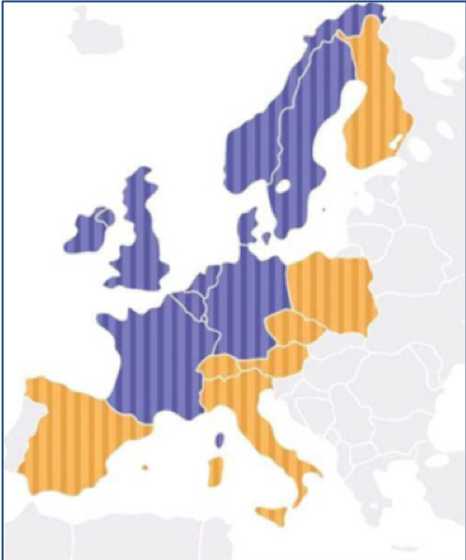 The aim of the NSCOGI was to establish a strategic and coordinated approach to improve current and future energy infrastructure development in the North Seas, with particular focus on the connection of offshore wind, onshore grid reinforcements and cross-border capacity.

The initiative aimed at coordinating all efforts towards necessary investigations on a) technical and grid planning questions, as well as b) identifying market and regulatory barriers and c) proposing measures to streamline the permitting process, in order to assess the economic interest of offshore grid development.

The overarching objective was broken down into a set of deliverables to be taken forward, initially for a two year period, by three Working Groups (WGs): WG1 – grid implementation, WG2- market and regulation and WG3 - permissions and planning.

WG3 which is focused on planning is of most relevance to the NorthSEE project and this report. The final report from WG3 identified differences between planning procedures but no incompatibilities between countries to integrated cross-border grid infrastructure development. It also identified solutions to improve coordination between countries and harmonise the permit process by considering country pairings for interconnection. The country pairings were compared and analysed in terms of their planning procedures and consent activities and this allowed common solutions and best practices to be shared.

The NSCOGI has shown the importance of cooperation between Governments, the European Commission, Regulatory institutions and TSOs for the development of a common understanding of future requirements and possible routes and barriers. Continuation of the Initiative was therefore recommended in order to further investigate the requirements of a 2030 grid. Since the North Seas are recognised in the infrastructure package as being one of the priority corridors and expected to supply a significant volume of RES up until 2030 and onwards, the Political Declarationon energy cooperation between the North Sea Countries was initiated as a continuation of the NSCOGI. The same NSR countries have agreed to further strengthen their energy cooperation, to improve conditions for the development of offshore wind energy in order to ensure a sustainable, secure and affordable energy supply in the area. The declaration will support the development of this priority corridor. The initiative focuses on building of missing electricity links, allow more trading of energy and further integration of energy markets and reinforcing regional cooperation which will help reduce greenhouse gas emissions and enhance security of supply in the region.

In terms of MSP and development and regulation of offshore grids and other offshore infrastructure, participating countries have agreed to work on from 2016 to 2019 [6]:

ENTSO-E represents 42 electricity transmission system operators (TSOs) from 35 countries across Europe. It was established and given legal mandates by the EU’s Third Package for the Internal Energy Market in 2009, which aims at further liberalising the gas and electricity markets in the EU.

TSOs are responsible for the bulk transmission of electric power on the main high voltage electric networks. They provide grid access to the electricity market players (i.e., generating companies, traders, suppliers, distributors, and directly connected customers). In many countries, TSOs are in charge of the development of the grid infrastructure e.g. Belgium, Denmark, the Netherlands and Germany. TSOs in the European Union internal electricity market are entities operating independently from the other electricity market players.

In the TYNDP 2018 report, there are three separate scenarios for the year 2030 which reflect different possible pathways to meet future EU decarbonisation targets, but all have common themes with regards to renewable generation. The three scenarios include:

With relevance to this report, the main scenario result is that there will be large increases in wind and solar generation from 2016 to 2025 and on to 2030, with the DG scenario seeing the highest installed capacity.

The European Commission ordered a Baseline Environmental Assessment Study calledBEAGINSto ensure that environmental concerns and impacts are appropriately considered in the development of an offshore energy grid system in the North and Irish Seas. Focusing on Belgium, Denmark, Germany, Ireland, the Netherlands and the United Kingdom, the study aimed to compile an environmental baseline including maps, constraints, risks, impacts, ways of mitigation and alternatives. The Baseline Environmental Report has determined the effects (positive and negative) of several future energy and grid scenarios for 2030. The scenarios included:

The recommendations of the study included suggestions relating to development of an appropriate planning framework; coordinated infrastructure roll-out; development of an appropriate management framework; data management and storage; development of best practice guidance; and monitoring and data requirements. Overall, the study recommends a meshed grid solution as the reduced footprint of nearshore cabling utilising the meshed solution has greater potential, in combination with sensitive siting, to reduce habitat displacement and avoid sensitive coastal sites [23]. The results can be used to inform any future plans for renewable energy generation, energy storage, electricity cables and associated equipment in the North and Irish Seas. Available as a resource to the relevant Member States and stakeholders, it has allowed for commonly agreed environmental baselines to be incorporated into the assessment of plans, programs and projects early in the policy, design or planning processes.

The project ‘PROgress on Meshed HVDC Offshore Transmission Networks’ (PROMOTioN) [9] applied in 2015 for funding under the EU Horizon 2020 (H2020) programme call ‘Competitive Low-Carbon Energy’ 5 (LCE 5). Within the framework of modernisation of the European electricity grid, this call focused on advancing innovation and technologies relevant to the deployment of meshed off-shore HVDC grids. Its specific objective is to pursue an agreement between network operators and major equipment suppliers regarding a technical architecture and a set of multi-vendor interoperable technologies in order to accelerate HVDC grid development. A regulatory and financial framework will be developed for the coordinated planning, construction and operation of integrated offshore infrastructures, including an offshore grid deployment plan (roadmap) for the future offshore grid system in Europe.

PROMOTioN is the biggest energy project in the EU’s Horizon 2020 Research Program and includes 33 partners from 11 countries. All NSR countries are involved in this project and have contributed major HVDC manufacturers or TSOs, along with several wind turbine suppliers, offshore wind developers, as well as leading academics and consulting companies.