Planning for grid infrastructure in the North Sea is currently largely nationally focused with limited transnational coordination. This is reflected in energy infrastructure which is largely disconnected [19]. Differences also exist in planning provisions and processes which becomes more apparent when planning for interconnectors which are transnational in nature. Cables connected to offshore renewable developments are naturally linked to the offshore energy planning processes, however other cables such as interconnectors appear to be either planned for separately or not planned for at all. In countries such as Germany, Belgium and the Netherlands, there are designated cable corridors or priority areas for cables which are Government-led, however in Scotland, for example, cable routes are located by industry and then approved by planning and licensing authorities.

North Sea countries are also at different stages of grid planning and this may be explained by different spatial needs for planning. For example, Germany has a more established and focused approach to grid planning where they have created an offshore grid development plan which explores scenarios for offshore grid expansion. This plan covers installations until 2025 and will then be replaced by the offshore spatial development plan. The new plan will be a more comprehensive planning tool which brings spatial and chronological planning of offshore wind farms and grid connections together. The goal of the plan will be to spatially coordinate the existing and future grid infrastructure, particularly in view of the offshore wind farm grid connections in the EEZ, within the parameters given, and to define them in the interests of forward-looking and coordinated overall planning. The plan contains cable routes for interconnectors which are routed through specific gates which link German’s EEZ and to their national as well as international waters. As well as corridor and gates, the German plan also includes descriptions of possible cross connections. Planning for cables also features in The Netherlands 2016-2021 Policy Document on the North Sea and Scotland’s National Marine Plan. However, the Netherlands and Scotland’s approach to grid planning is less established than the German approach and only features as a chapter rather than a dedicated grid plan. Considering MSPs under preparation, for example Sweden and Denmark, not all plans include regulations for offshore energy cables. Swedish MSP has a more guiding character and therefore does not include any spatial rules for electricity cables. Denmark is at a very early stage of their MSP and have not yet decided how to treat electricity cables in their national MSP.

In terms of transnational cooperation of planning, which is limited, Germany takes into account plans of cross-border subsea cables in its grid plan.

Grid development is one of those maritime industries that infrastructure crosses the land-sea boundary where land planning is just as important as planning in the sea. In order to support the increased energy generated from windfarms, Germany are also carrying out grid improvements on land. They are re-designing their electricity cables and creating new connection points to account for the higher energy demand in the south of the country.

In terms of licensing for cables, this is often split between national waters and EEZ where differences apply due to different legislation. This is the case for Germany and Scotland. However the procedure for planning and licensing cables within EEZ and national waters and cross border is the same in the Netherlands. There are also various licences granted such as a construction licence and a transmission licence and transmission is usually dealt with by a designated Transmission System Operator (TSO). The TSO is responsible for providing safe and reliable energy supply. Germany and The Netherlands share the same TSO, called TenneT, who are the first European cross-border grid operator.

TSO’s are important in grid planning in the NSR as some countries such asBelgium, Denmark, the Netherlands, Germany and Norway, TSOs are in charge of the development of the grid infrastructure. Differences exist NSR countries between TSO models where for example, the UK has a ‘third-party model’ and Germany has a ‘German TSO model’ [21].

The UK decided to organise tenders to allow third-parties, Offshore Transmission Owners (OFTOs), to compete for the ownership and operation of offshore transmission assets. The main reasons for doing so are to deliver cost efficient investments, attract the necessary fresh capital and bring in technical expertise.The OFTO regime has been in place since 2009, before offshore wind farm grid connections were built, owned and operated by the wind farm owners themselves. Because of unbundling requirements, the offshore generation developers could no longer hold both generation and transmission assets. However, in the current regime, developers of offshore generation projects may still choose to either build the transmission assets themselves or to let the OFTO be in charge of the construction. In terms of planning and coordination, the approach followed where OFTOs bid for individual assets focusses mainly on achieving value-for-money on a case-by-case basis and does not directly support coordination [21] and this is why coordination has so far been limited. Ofgem, the Government regulator for electricity markets in the UK, is developing measures that will help to enable coordination of offshore transmission networks while retaining the benefits of the competitive offshore transmission regime. 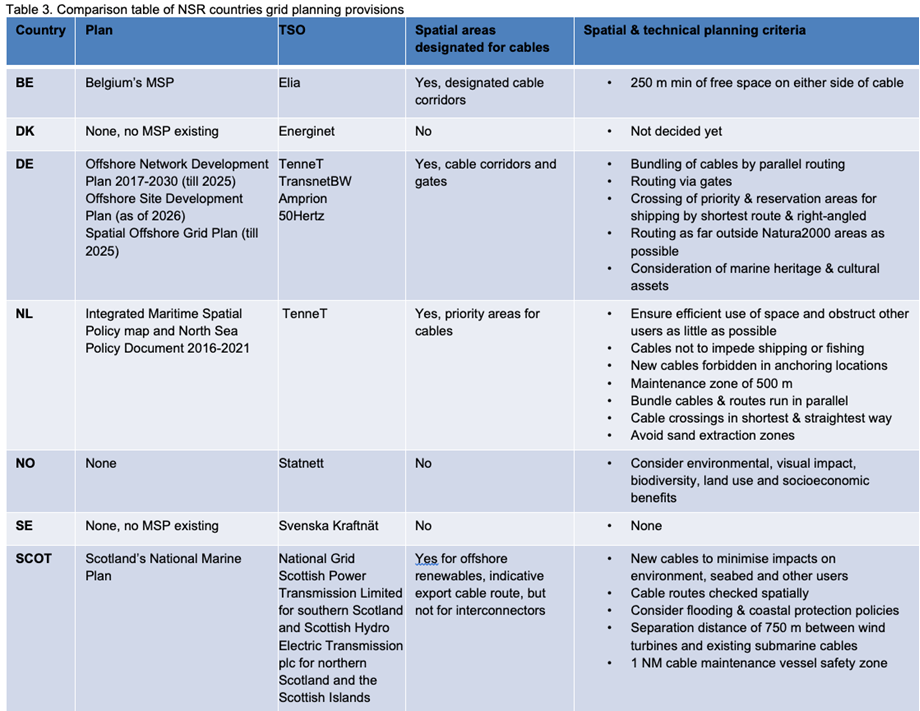 Incomparison, inGermany, the offshore connections are constructed, owned and operated by the TSOs. German TSOs first tried the “reactive TSO model”. This meant that grid connection was legally guaranteed and was, therefore, not a part of the wind park developers’ responsibility. The government obliged the relevant TSOs to provide a guaranteed grid connection, but the TSO in charge of the connections of offshore wind farms in the North Sea faced severe challenges in providing the grid connection, resulting in significant delays. To avoid these delays,Germany worked on a new approach to offshore grid connection, the “proactive TSO model”. The developer’s right to request connection has been replaced by an objective, transparent and non-discriminatory allocation procedure that allows for transmission assets to be shared across individual wind farms. In terms of planning and coordination, although there were significant coordination issues between the construction of offshore generation and offshore connection in Germany, it can be argued that by making the TSO responsible for the connection offshore grid planning, more specifically the coordination among generation projects, is encouraged [21].

The Danish model, in place since the first significant investments in offshore wind, is very similar to the German ‘proactive TSO model’. Belgium and the Netherlands, both with concrete plans to develop a ‘power socket at sea’, are converging to the German model, only in the UK it is not the TSO who owns the offshore cables but a third party.

In terms of regulatory models for NSR countries, the UK ‘third-party model’, the German ‘TSO model’ and the Swedish ‘generator model’ have been compared in a study by Meeus 2014 [22]. The study aims to test which model is most suitable to support the two ongoing future energy trends e.g. the more towards larger offshore wind farms further out to sea, and the move towards cross-border offshore grid projects. Sweden’s ‘generator model’ has been used in some projects where the offshore wind farm developers are responsible for their own connection to shore. The results indicate that the third party and generator models are better suited to support the evolutions towards larger scale offshore wind farms that are increasingly developed farther out to sea, while the TSO model is better suited to support the evolution towards cross-border offshore grid projects [21] [22]. This means that there needs to be a trade-off between the two as there are currently no existing regulatory models that can fulfil all the requirements. It was suggested by the author that this trade-off has to be made at the regional or EU level because different national regulatory frameworks are incompatible when applied to a cross-border offshore grid project.