The North Sea region faces major changes in grid development over the coming decades. The large increase in renewable energy generation across the region needed to meet European targets, coupled with the requirement to integrate the European electricity market, results in a number of challenges.

To accommodate the energy transition and help the region to meet the challenges described before, a large number of projects are required in the NSR. Table 4shows an inventory of expected and future transnational electricity interconnectors in the North Sea at various statuses from concept and early planning to under construction. As of March 2019, 5 projects are under some stage of construction, 2 in the consent process and 11 at the concept or early planning stage. 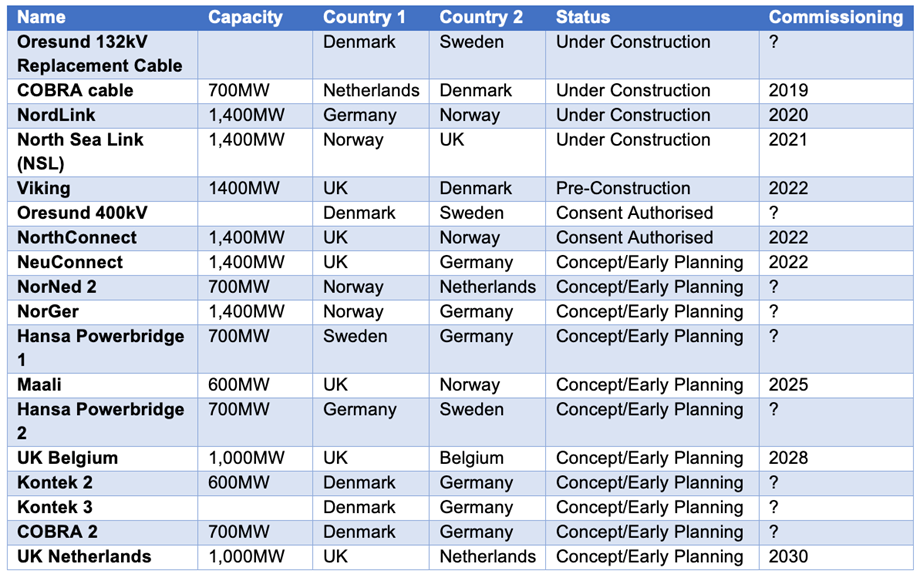 Figure 13 shows the projects that are promoted in the NSR for TYNDP 2018. It also shows how the UK and the Nordic region will become much more integrated with the Continental European system in the future. This will facilitate the diverse spread of renewable generation across the region to be fully exploited and shared amongst NSR countries. Figure 14also shows the additional onshore grid required in Germany to accommodate the larger influx of energy. 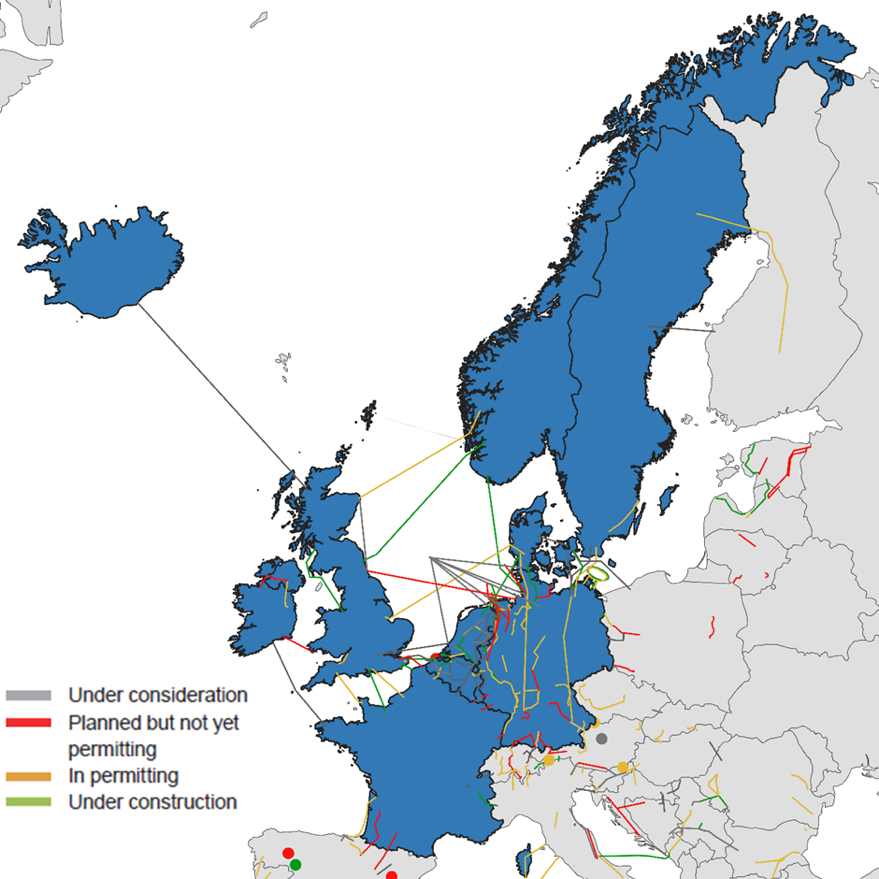 Figure 13. Future interconnectors in the NSR as promoted in the TYNDP 2018

Interconnection levels expected for 2020 and predicted for 2030

The 10% electricity interconnection target has provided political drive to increase interconnection levels through cross-border projects over the last years. All NSR countries have already achieved or are on track to achieve to 2020 target of 10%, except the UK which are not on track and unlikely to meet the target (Table 4) [20].

The measurement of interconnectivity has been a recently debated topic and it has been questioned if current methods are fit for purpose for calculating future levels. Previously, interconnectivity was measured as a ratio of net transfer capacity to generation capacity and this method was used to calculate the 10% interconnection target back in 2002. However, it has been realised that the 10% target was set in a radically different energy situation where less energy was supplied from renewable sources. At present, the electricity system consists of more variable energy sources such as wind and solar and therefore it was agreed by the Expert Group that a new functional target was needed for 2030 and that the interconnection measurement method also needed adapted.

However the Expert Group acknowledge that no single formula can fully reflect the changing energy reality and that they need to be reviewed on a continuous basis.

Using the pre-mentioned recommended calculations, the report of the Commission Expert Group on electricity interconnection targets (November 2017) has calculated predicted interconnection levels by Member States across four visions. However the Expert Group recognise that there is no scientific consensus to measure the “interconnectivity” of Member States with diverse characteristics using a single formula. They consider the 2030 interconnection target as an important and useful policy tool to guide the development of trans-European electricity infrastructure. Table5and Table6show the results of these two calculation methods for all NSR countries and Figure 15is a visual representation of how the NSR countries score on the calculations and the three thresholds mentioned in section 1.5. 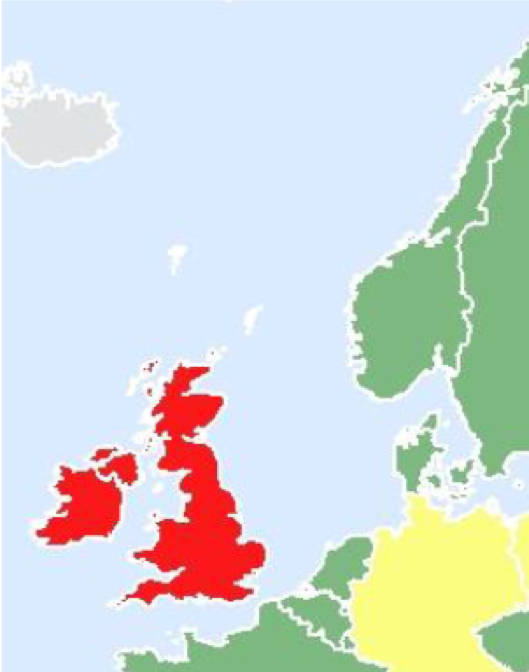 Figure 14. Map showing how the NSR countries score on the three thresholds in section 1.5.

Based on the two methods to calculate interconnection levels and with reference to the three thresholds mentioned in section 1.5, the Expert Group recommends that countries below the threshold of 30% on any of the two formulas should urgently investigate options of further interconnectors and report annually the results of such investigations. The countries above the 30% but below 60% thresholds on any of the two formulas are requested to investigate possible projects of further interconnectors regularly. In terms of NSR countries, the UK is below 30% on both calculation methods for all four visions (highlighted in red). Germany is below 30% for two of the visions (V3 and V4 highlighted in red) in one of the calculation methods (Table 6).

However, despite these results, NSR countries demonstrate considerable differences in terms of their energy mix, size of energy market and geographical location, which influence their interconnectivity potential and needs and makes it challenging to determine future interconnector demand.

Offshore wind and grid scenarios by 2030

The report predicts that by 2030, under business-as-usual assumptions (without 2030 targets), offshore wind is expected to cover 4% of all EU electricity, rising up to 6.9% with efficient 2030 target implementation and market conditions (energy and carbon) and up to 10.1% with favourable economic conditions and industry efforts [4]. For countries surrounding the North Sea, this would mean 15% of regional demand being covered byoffshore resources. This will be a key component in the move towarda fully sustainable electricity system by 2050. The realization of such an expansion in renewable power sources will depend largely on developments in grid infrastructure, amongst other factors.

The main drivers for interconnection development between grids are the expected increase in renewable energy generation and the aim of securing a dynamic internal electricity market. This means that interconnector demand is closely coupled with offshore renewable energy production and in particular, offshore wind. Table 2shows the three WindEurope 2030 scenarios and the predicted offshore wind capacity in Europe. Also included is the inter-linked grid situation which will be required to realise these scenarios. The Central Scenario predicts that 323 GW of cumulative wind energy capacity would be installed in the EU by 2030, 253 GW onshore and 70 GW offshore. It also assumes significant progress in system integration, allowing a higher penetration of wind energy and other renewables as well as sufficient grid infrastruc­ture to meet the EU’s 15% interconnection target. In the Central Scenario, clear policy commitments on electrifica­tion drive demand for renewable power. 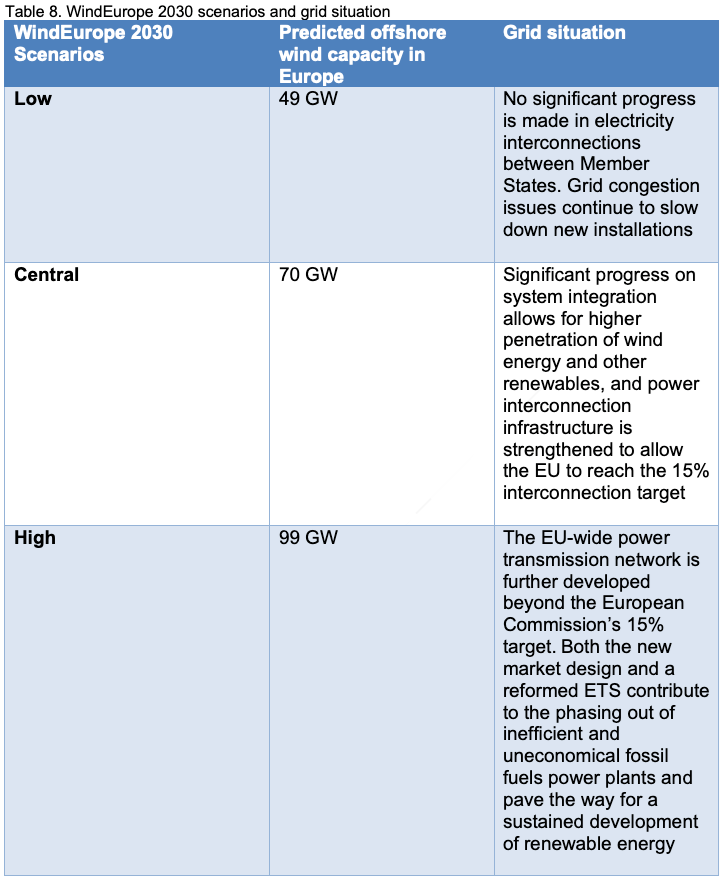 The North Seas Offshore Grid 10 Year Network Development Plan (TYNDP) Regional Insight Report for 2018 aimed to analyse three separate scenarios for the year 2030 to investigate different possible pathways to meet the future EU decarbonisation targets. The 2030 and 2040 analyses clearly show that by building the proposed infrastructure, significant positive effects will be seen, including: