Grid plans for the future include the push towards more ‘greener’ forms of energy and the grid improvements to support this. The European Expert Group on electricity interconnection targets recognizes 7 trends that are likely to have an impact on electricity infrastructure in Europe and should be considered in the view of the future review of the interconnection target [14]:

Electrification of transport (electric cars) and decarbonisation of heating and cooling systems in line with EU carbon reduction emissions will play a major role in the transition to a clean energy system. Energy efficiency will also not only help to meet EU energy targets but it might have the potential to decrease the demand for electricity. The EU energy mix is evolving into an increasing share of decarbonised, renewable energy and the Expert Group believes that this trend will encourage investment in energy transportation infrastructure such as interconnectors. Decentralisation means that electricity will be produced close to the point of use and may reduce the need for grid infrastructure. This may be a barrier to future grid development. Digitalisation can contribute to, through data collection, the optimisation of energy generation and thus its transmission. Energy storage brings several benefits to the electricity system such as flexible generation, demand response and grid extension including interconnectors. Smart energy systems which integrate electricity, gas, heat and transport sectors can be used to ensure high flexibility both on energy supply and demand.

All of these trends will have an impact in the NSR and will shape the future development of offshore linear energy infrastructure. However those that will have an impact on spatial requirements in the NSR spatial are: evolution of the energy mix, decentralisation and energy storage. These trends will either require space in terms of marine planning for more interconnectors or energy storage facilities or alternatively potentially reducing the need for space for more offshore linear energy infrastructure in the case of decentralisation.

Germany and the Netherlands via their TSO, TenneT, are working on extensive future grid improvement plans and the Netherlands in particular are considering creating an international grid network of sustainable wind energy in the North Sea for the long term. To safeguard grid stability, a new approach to offshore grid planning is required and it has been suggested by TenneT that this could combine wind power, interconnectors and energy storage. TenneT have proposed long term plans (after 2030) for the creation of an artificial island to act as a central hubcapable of supporting offshore wind farms with a total capacity of 100 GW between 2030 and 2050 in the North Sea. The ideal location for this hub would be the Doggerbank where transnational coordination and cooperation of its development would be essential. The hub would host installation and operations and maintenance activities for OWF developers, as well as linking interconnectors and offshore wind farms to several countries. This concept, the North Sea Wind Power Hub (NSWPH), has been submitted to ENTSO-E to be included in the next TYNDP as “under consideration”. If realized, the NSWPH would be a key piece in the European energy infrastructure system and a prime enabler of the EU's goals of market integration and renewable energy source development.

Another similar energy island idea from Belgium was to create an energy atoll which was planned to be an artificial atoll which would be built off De Haan, five kilometers from the shore. The structure would gather surplus energy from offshore wind turbines and store it, then release it to the national grid when demand was high. However the project did not go ahead as it was deemed not viable and thought to lead to higher energy prices.

As previously reported inWP5 ‘Status quoreport on offshore energy planning provisions in the North Sea Region’, offshore wind development export cables are set to increase in length as the larger offshore sites are increasingly being developed in deeper water, further offshore. This will require the utilisation of HVDC technology over the longer routes (in excess of 80 km) which is more expensive than HVAC technology. This will in turn influence grid design and configuration.  Currently, 65% of all TYNDP 2018 projects assessed within the NSR comprise AC technology; 35% of the projects are DC based [24]. However more DC technology will be expected in the future to enable the integration of the anticipated renewable generation, especially to strengthen connections across longer distances and cross-borders [24]. The use of DC technology for longer cable lengths in the future can be seen in Figure 16. 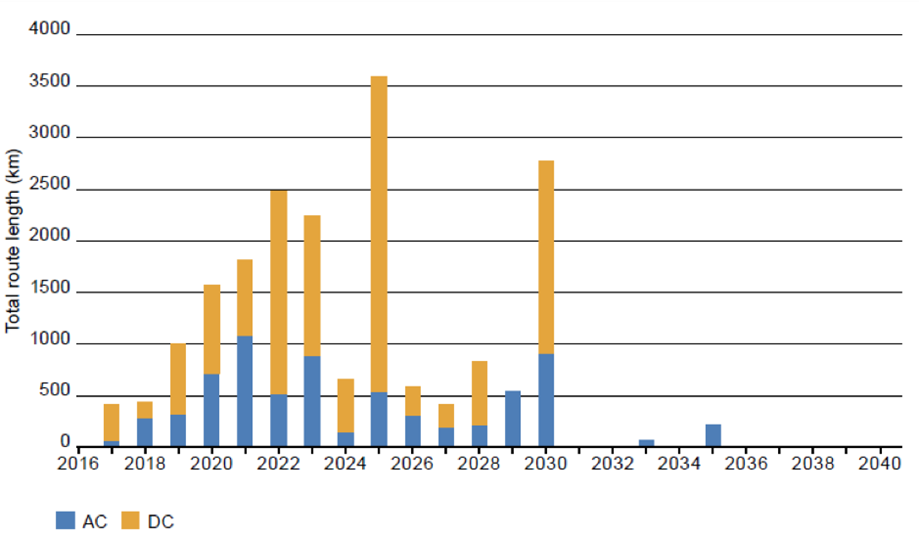 The use and improvement of HVDC cables however will open up access to deeper water sites, further offshore for offshore wind, which will effectively reduce conflicts with inshore activities and also reduce visual impacts from shore.

There is also technological developments in cable manufacturing where experiments are being carried out to test different mediums such as Glass Reinforced Polymer (GRP) cables to transfer electricity which are applicable to the marine environment. The advantages of this new cable material are that it has high carrying capacity, corrosion resistance, low maintenance and a long life expectancy. This is a cost effective, long term solution which could mean that cables have a longer life span before needing decommissioned.