Energy policies in the North Sea

North Sea countries are characterised by a range of environmentally friendly energy policies, including:

Denmark is a frontrunner in well-designed and aspirational policies for renewable energy, energy efficiency and tackling climate change. Renewable energy has been the heart of Denmark’s energy strategy. Denmark strongly relies on wind and biomass as sources for renewable energy. Simultaneously, Germany aims to develop cost-effective market-based approaches, while the Netherlands is moving towards an open, liberalized and advanced market economy and is strong in terms of market integration, ease of entrepreneurship, investment and innovation in their energy sector. Norway can be summarized as a frontrunner in cross-border integration and electricity market liberalization. 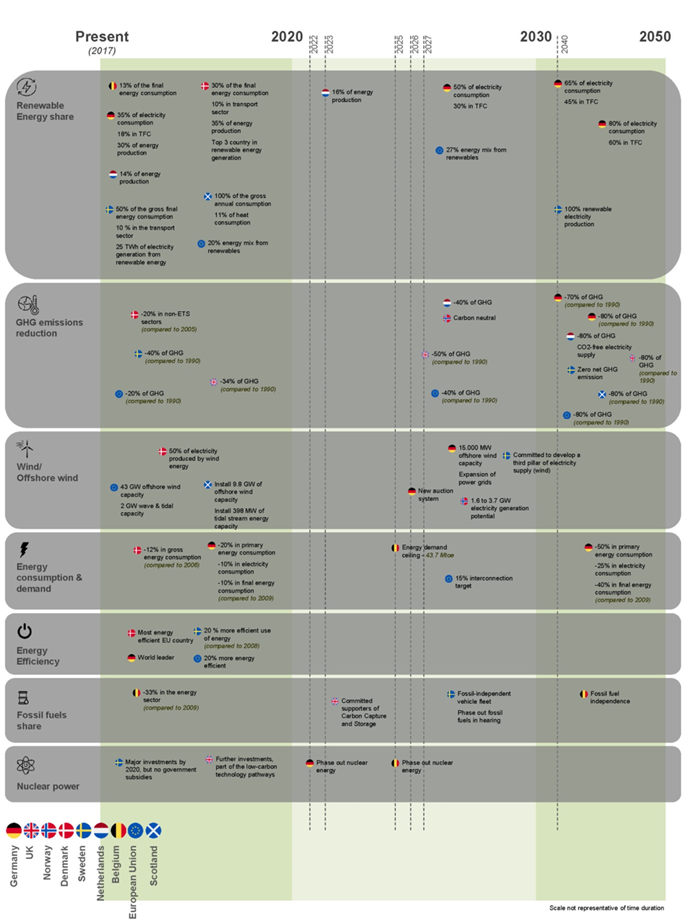 Furthermore, Norway opts for a long-term management and value creation with an environmentally friendly framework for its petroleum sector. Sweden meanwhile is regarded to be the leader in smart grid technologies and it is well integrated into the Nordic electricity market. The UK has traditionally heavily relied on fossil fuels, which is slowly changing into strategies towards less carbon emissions. Climate change has become a priority in the energy policies. UK is the only North Sea country with a firm commitment towards Carbon Capture & Storage technologies, and Scotland is the world-leading country of ocean energy support and commitment.

All North Sea countries (with the exception of Norway) are progressing towards achieving their European objectives for 2020 under the Renewable Energy Directive. Countries with a positive policy outlook are highlighted in light green. Amber colour is used for counties with a neutral policy outlook. 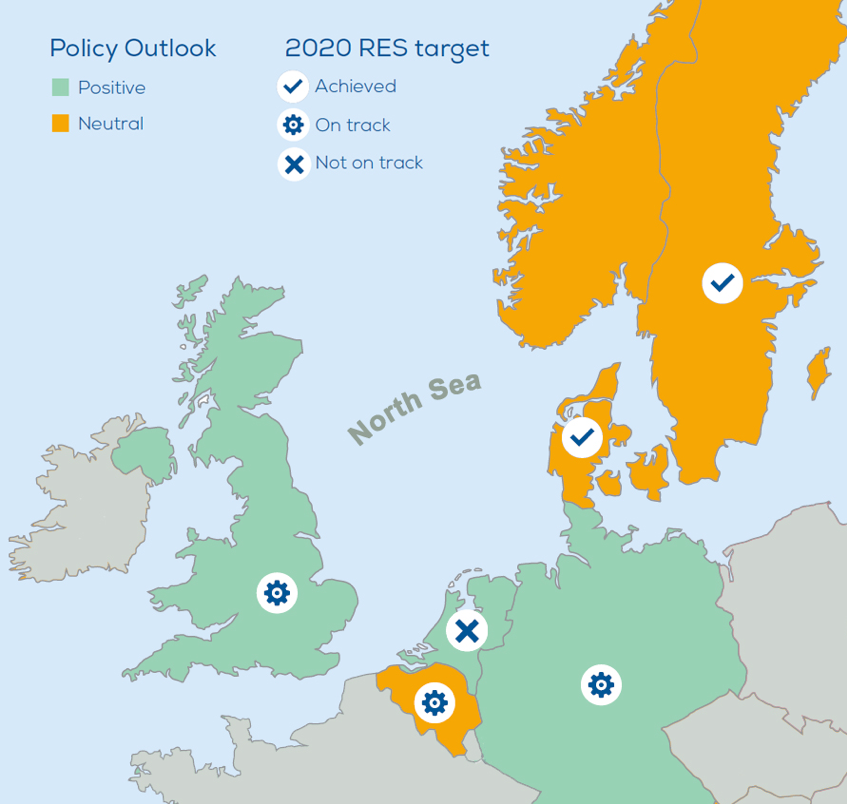 Figure 16: Progress towards 2020 RES targets in the North Sea region.

Denmark and Sweden have already achieved their targets. These countries have set national energy plans with concrete renewable energy goals. As an example, Denmark is aiming to go for 100% renewable electricity by 2035, which forces a renewable trajectory to 2020 that goes far beyond the European target. Sweden, which plans to reach 100% of renewable electricity by 2040, will also need to overshoot its 2020 European target. Belgium, Germany, and UK are on track towards achieving their 2020 targets. Netherlands is unlikely to fulfil their commitments, unless the country accelerates the pace of installation. Norway has made no binding commitments for 2020.

As part of the European objectives for 2020, the binding targets for renewable energy will have a significant influence on wind energy installations for the next few years. NSR countries have adopted different approaches for the support of offshore wind, including differences in support schemes, and spatial designations with varying exclusivity levels for offshore wind installations. As previously, countries with a positive policy outlook are highlighted in light green. Amber colour is used for counties with a neutral policy outlook. In addition, Figure 17 shows all spatial designations for offshore wind in the North Sea.

Table 2: Summary of wind energy policy landscape per NSR country up to 2020 (Source WindEurope 2017a).

Furthermore, the use of competitive bidding processes (e.g. state-aid/support schemes, tenders mechanisms) as from January 2017 is another variable significantly affecting the deployment of offshore wind. Competitive bidding processes are a condition established by the European Commission in order for Member States to comply with state-aid regulation. Competitive actions vary greatly between countries and are dependent on many conditions going beyond the scope of this report. Prior to 2017, North Sea countries (Denmark, UK, the Netherlands, and Germany) had already implemented competitive auctions to select wind energy projects. Between 2017 and 2020, more than 8.4 GW are already set in the plans of 3 countries (the Netherlands, Germany, and UK) for auctions including offshore wind energy. Most of this capacity will be auctioned in 2017. More countries are expected to make additional announcements. 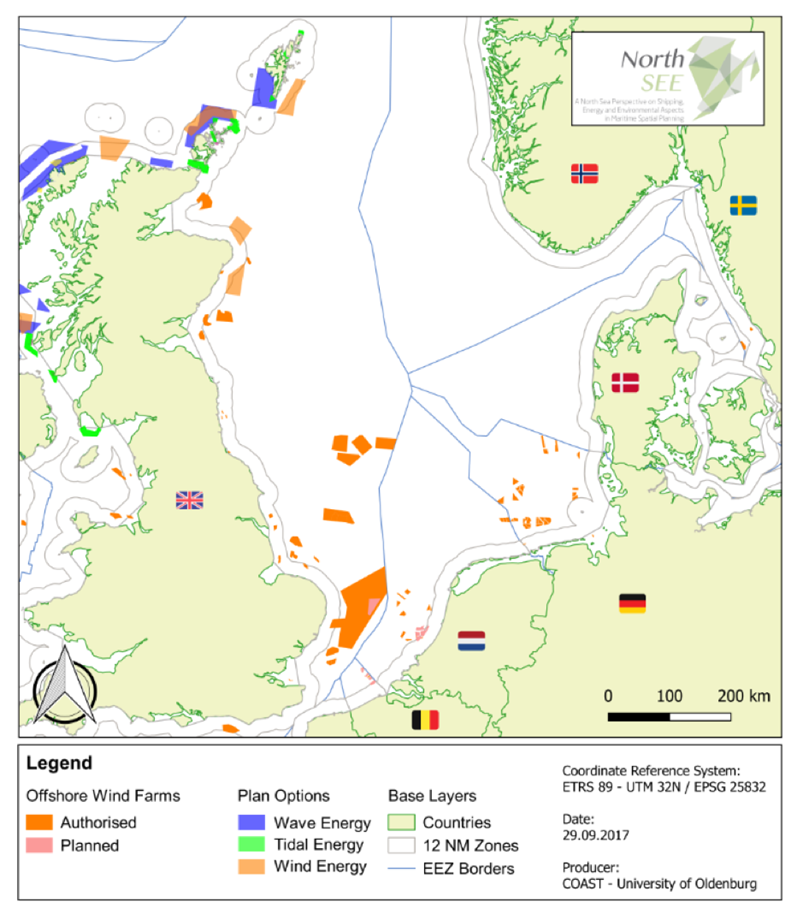 The time horizon of environmental-friendly policies is front-loaded, with most targets and commitments running up to 2020. Most of the remaining aspirational targets are running up to 2050. There is a notable lack of energy targets for the period 2020-30, demonstrating the lack of a concrete roadmap to achieving 2050 targets.

National commitments vary both in terms of aspirational levels, policy direction and in the way they have been expressed. This introduces challenges in a cohesive North Sea wide policy direction and comparison between NSR countries. Most countries have expressed a level of commitment to targets in renewable energy shares and GHG emissions reduction. Fewer countries have explicit commitments to targets for installed offshore wind capacity or energy efficiency. Considerable divergence exists between NSR countries in policy direction on fossil fuel dependency and the further deployment of nuclear power. Differences in the way targets have been expressed include variable units (percentage shares versus absolute units), expressing energy shares as a function of the energy consumption, production, or other sector/market subcomponents, and a range of base years used to express GHG emissions reductions.