This report highlights the numerous differences in the MSP processes and planning approaches of all of the North Sea countries. This is largely results from different countries policies, aspirations, timelines and targets. Despite all EU countries having the same target of having maritime spatial plans in place by 2021, differences still remain in countries progress with achieving this goal, for example Scotland and Germany are going through their MSP revision process, where Denmark and Sweden have no MSP in place as of yet.

With the exception of Norway and Sweden, most NSR countries have planned and designated spatial areas for offshore renewable energy and their Governments have set goals to meet renewable energy targets. No zones have been opened in Norway yet, but areas have been identified, and no specific target goals or spatially designated areas have been set in Sweden. Strategically planning and designating spatial areas for offshore renewable energy will allow energy targets to be met, make it easier to balance conflicts and synergies with other marine activities, such as shipping and allow sustainable management and protection of the marine environment. It will also aid planning and identifying suitable locations for future offshore energy industry infrastructure such as floating wind.

Differences in the size of national marine area influence the MSP process and in particular sectoral planning for offshore renewable energy. For example, Scotland has a very large marine area and there are plan option areas which are designated to host either offshore wind, wave or tidal energy developments. In comparison to this, Belgium has a much smaller marine area and therefore cannot afford to have single use areas, and has identified technology-neutral marine sites (areas are just designated as renewable areas and can be wind, wave or tidal developments). Due to space restrictions, Belgium is also keen to encourage multi-use developments in order to maximise use of space and generate more energy out of a smaller space.

Numerous data infrastructures contain gaps and there are differences in the level of data that each contain. Contributing to and maintenance of data portals has many advantages for maritime users and planners, such as easy access to up-to-date information held in one common place. Gaps can also be identified more easily and everyone can benefit from shared resources. A recommended database to contribute to is the “EMODnet human activities” portal which is based on free, open-source technology and aims to collect, harmonise, and make available data relevant to human activities. It is also vital for industry to be encouraged to submit their data to portals and a recommended route for submission and contribution is via the EMODnet data ingestion portal. This portal will become the reference point for all those European marine data holders. Data is collected on European coastal and ocean waters to help governments, industry and policy makers to make informed decisions.

There is no over-arching body or mechanism for MSP coordination and cooperation in the North Sea, despite the call to do so via the EU MSP Directive

Despite all of the transnational cooperation that is demonstrated in Section 1.5 via different MSP projects and joint initiatives, at the moment there is currently no over-arching North Sea MSP body or mechanism that could coordinate effort and facilitate cooperation after the lifetime of the NorthSEE project. Currently there are only transnational consultations of national plans but this does not necessarily account for cooperation. National strategic environmental assessment of MSPs follow the ESPOO Convention which lays down the general obligation of States to notify and consult each other on all major projects under consideration that are likely to have a significant adverse environmental impact across boundaries. However, spatial planning has no over-arching cooperation mechanism despite the call to do so via the EU MSP directive. The question remains how a NSR-wide body could provide coordination with the national MSPs being under national mandates and jurisdiction. A proposed solution for the NSR would be to create a similar approach to VASAB in the Baltic Sea. VASAB is intergovernmental multilateral co-operation of 11 countries of the Baltic Sea Region in spatial planning and development, guided by the Conference of Ministers responsible for spatial planning and development, steered by the Committee on Spatial Planning and Development of the Baltic Sea Region (CSPD/BSR) composed of representatives of respective ministries and regional authorities.

Transnational cooperation between North Sea countries is made difficult by countries using different terminology in their MSP process and also different terms to describe the status of their offshore renewable energy developments. This lack of consistency of terminology across countries creates a barrier to transnational cooperation and hinders countries understanding of their neighbouring countries. The consequences of this can be conflicts in the spatial planning of border areas between countries and impacts to activities with a transnational nature such as offshore linear energy infrastructure and shipping. There is also an issue with terminology for joint data layers where there needs to be agreement on terminology and a common understanding.

New installations will remain relatively strong until the end of 2020, but policy uncertainty and lack of ambition for the post-2020 climate and energy framework could have a significant negative impact on the sector. A concrete roadmap to achieving 2050 targets is required. Only a handful of Member States have provided visibility and regulatory certainty. With only 5 countries among the EU- 28 announcing auctions plans, there is a lack of certainty on revenue stability for investors.

Spatial implications of future trends need to be explored further

Multi-use energy developments have been identified as a future energy industry trend, along with trends for larger, more powerful and further offshore wind farms, floating wind and increased wave and tidal energy developments. However there is currently no link between future energy trends and spatial policies. Figure 36 gives a simplistic spatial indication of the predicted future growth of offshore wind in the North Sea according to targets set from 2016 to 2045. The size of the circle represents the area required to produce the energy. 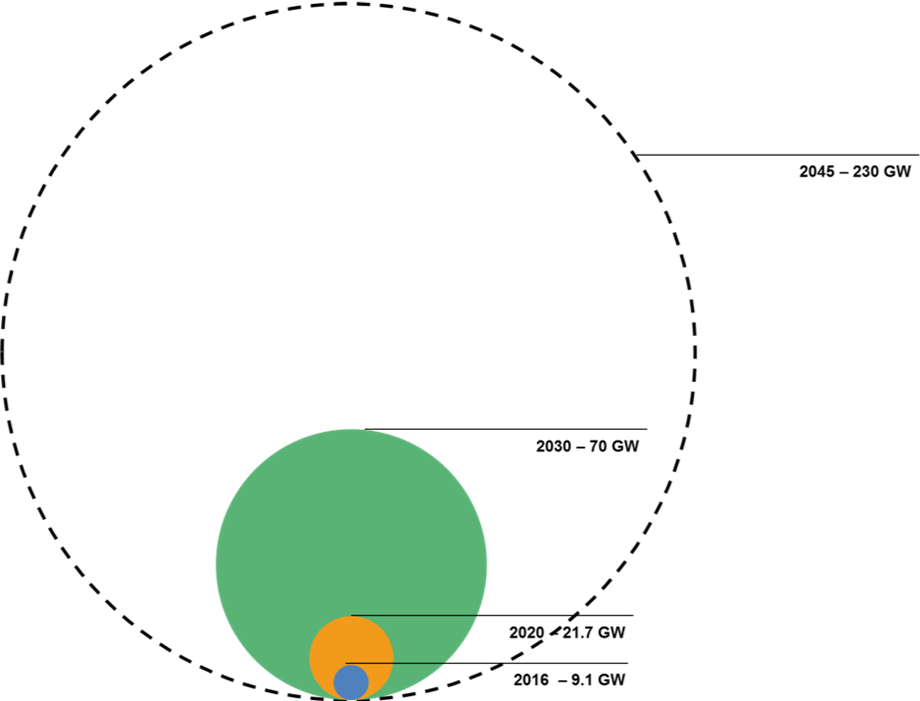 Partner countries are on track to achieving GHG 2020 targets, and interim renewable energy targets have been met. In terms of long term targets, most countries lack of 2030 targets and any existing 2030 targets lack clarity in terms of national targets. In order to meet 2050 targets, this will involve increased energy efficiency, renewable energy, nuclear energy and carbon capture and storage. Currently, only the UK has set targets related to CCS. Overall, more European internal energy market integration and commitment to the Energy Union is needed in order for countries to keep on track with achieving EU targets.

Lessons learned from countries with MSP in place

MSP is key to efficiently managing human activities and in turn, their impact to the marine environment. It is also essential for setting the spatial framework for blue growth as well as a whole host of social and economic benefits. In terms of transnational consultation, it is sometimes dealt with quite informally, or undertaking ad-hoc consultation quite late in the MSP process. Advice would be to include transnational consultation as part of the formal consultation process and to engage with bordering countries at an early stage of the process. Transnational issues should also be discussed cooperatively and not in isolation. It is also encouraged to join and/or form regional sea basin forums, as well as cooperate in transnational projects, such as the NorthSEE project, as an opportunity to improve coordination of a number of aspects related to MSP.