Looking back on the final conference 2019

10 October 2019 - Published by Evite van Winkoop
On October 3rd 2019, Like!’s Final conference was hosted at the Energy Barn at the Zernike Campus in Groningen, the Netherlands . Around 140 participants CONNECTED TO THE FUTURE and experienced Like!’s use-cases and pilots which we have developed in the last three years. In this article, we look back at the very successful and inspiring conference, full of interesting pilots, various excursions and lots of networking. 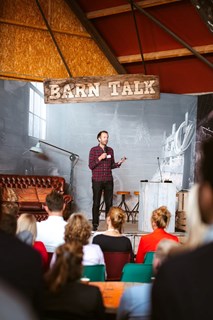 The CONNECT TO THE FUTURE conference was kicked off by Martyn Wallace from the Scottish Digital Office. He welcomed us in the city of Groningen, he explained the program of the day and introduced vice mayor of the city of Groningen, Paul de Rook. The vice mayor stressed the importance of an inclusive society, which means that municipalities and local governments should innovate their digital skills and public services.

This was also emphasized in Dominic Campbell’s keynote speech on ‘Designing Public Services for the 21st Century’. Dominic is CEO at FutureGov, which supports public organizations through the digital transformation and service design to deliver the highest quality of citizen-centered services. He claimed that digitalizing organizations is not just buying and installing some high-tech products. “We don’t just start with technology. We start with people.” Besides, digitalization is a 21st century reaction to 20th century businesses, for example: businesses think digitalization is selling products via online webshops. In order to make digitalization heart of your organization, you need to change your organization. For example, 21st century businesses such as Airbnb, Amazon and Netflix don’t own their products like 20th century companies (Hilton, Wholefoods and Blockbusters) do, but they have made digital service design their core business. Dominic concluded, “our organizations must be models of the world we want to build.”

During the three years of Like! project, many pilots have been developed, tested and implemented. Connections between the different partners have been found and various stories have been told. We have captured all our experiences in three magazines which we officially presented at the final conference. The magazines are now available on our website. You can download them here.

With this in mind, participants were able to direct their own connection to the future by choosing between four different masterclasses and four different excursions at the Zernike Campus. 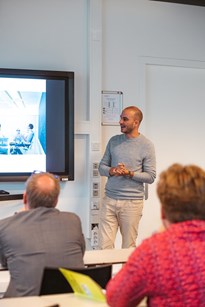 “The most valuable asset that any company can have is DATA!” Dr. John Dong, associate professor at the University of Groningen stressed that data plays a very central role for governmental organizations. But having a large pile of data is not sufficient for developing successful policies. Big data demands high quality, reliable, in different forms and of great value for the company. But, “the most challenging part is transforming people, rather than adopting new technology.”

Miguel Arana Catania of CONSUL showed us how the future can, and already looks like in a digital democracy. He has developed the CONSUL tooling as an online democratic platform on which citizens can initiate proposals, vote on ideas and divide money between different projects. The mission of CONSUL is to improve direct democracy and citizen participation worldwide by using CONSUL, the largest open source digital democracy platform. CONSUL has already been used in 130 institutions from 33 different countries, serving 90 million of citizens worldwide. The tooling received the United National Public Service Award. In the city of Madrid, citizens for example divided 100 million Euros by proposing and voting on citizen’s ideas on how to improve the city of Madrid. For more information you can check the website (http://consulproject.org/en/).

Connecting to future-municipalities may mean that you are asking your questions to a chatbot. A chatbot is a robotic instrument that provides fully automated chat conversions. But how can you build your own chatbot? Joost Groenestein of the Association of Dutch Municipalities (VNG) and Ewoud de Voogd, partner at HowAboutYou, expert in online interaction in public organizations showed how you can build and integrate a chatbot in your own communication-channels. Would you like to read more about chatbots? Click here to download the use case paper.

As was already stressed by various speakers during the conference, digitalization is not just implementing some digital tooling, maybe more important is focusing on the people. Martyn Wallace, Chief Digital Officer at the Scottish Local Government took participants to CivTech®, a program that brings together public sector expertise and private sector creativity to solve real problems, develops new products and deliver better, faster and easier services for everyone. In small groups, the participants came up with problems that they pitched to others as they would if they were looking for a solution provider. The most successful pitches were rewarded with a real Scottish treat! 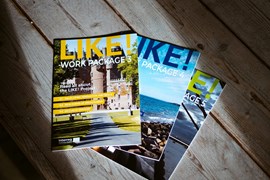 Besides these four interesting masterclasses, participants could also experience the CONNECTION TO THE FUTURE by visiting four innovative locations at the Zernike Campus. Bytesnet, for example, showed the value of data. This company is a large data competence centre which stores data for large organizations in a green and sustainable manner. The Centre for Information Technology showed how large amounts of data could be visualized and used to really experience new projects or new plans. The 5G lab is a playing field for discovering the newest application possibilities of 5G in the North of Groningen. In the 5G Fieldlab we experienced some of the newest technologies that could be used in many fields of expertise.

And last, participants could experience at the Digital Society HUB what happens when you put students, researchers, SME’s, and larger businesses together to come up with solutions for societal challenges. Especially ICT, communication and interactive media are used here to develop new CONNECTIONS TO THE FUTURE.

Did you miss the final conference?

You can download the magazines here on our website. It is also possible to download the powerpoint presentations of the keynote speech and the masterclasses. Click on the bulletpoints below. You can also view the photos from the final conference here. Check also the blog of the North Sea Region about our conference!