In January 2020, WaterProof tried to recover the measurement station that it had deployed on behalf of Rijkswaterstaat in August 2019. The station was deployed approx. 50 miles west of the island of Texel. Unfortunately, the instrument could not be found at the measurement location. This was very disappointing, as a long period of data was lost. A back-up station was immediately deployed at the same location, to continue measurements.

Since the station was equipped with an acoustic release for retrieval to the surface, there was a possibility that the station was still present but not responding to its transponder. Rijkswaterstaat decided to return to the location to search for the station with Side Scan Sonar, multibeam and ROV from its research vessel the MS Arca.

The second station was successfully retrieved by ROV. Unfortunately, the first station was not found, although some remains were identified on the seafloor.

In summer 2020, good news arrived at the WaterProof office, when Jonas - a gentleman from Germany - called that he had found a Soundtrap device at the Skallingen beach in Denmark during a holiday walk at the beach. He was willing to bring the measurement station back and put it on transport to the Netherlands.

The instrument contained valuable information till half of October 2019, when it was broken loose from its anchor. From that moment, we recorded a very interesting and long travel floating on the surface, rolling over the seabed and beaching a shore at Skallingen. Transport back to the Netherlands was swift and quiet, with many thanks to the finder Jonas to get in contact and arranging transport to us! 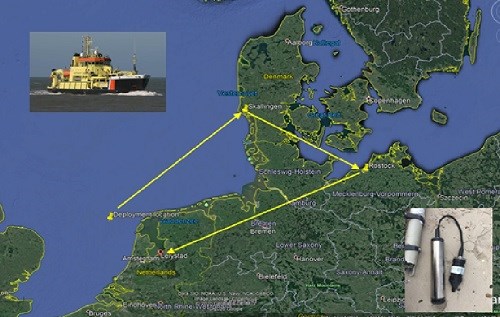