29 July 2019 - Published by Niels Kinneging
Sound is everywhere. Not only on land but also in the seas and oceans. Some sounds are of natural origin, but human activities add to the marine soundscape as well. We don’t have a good understanding of the types and distribution of these underwater sounds yet, let alone of the effects that they may have on marine fauna. At the end of May 2019, a permanent acoustic recording station was installed in the Belgian part of the North Sea. This major accomplishment is framed in the project ‘Joint Monitoring Programme for Ambient Noise North Sea’ (JOMOPANS). The new equipment will help scientists to understand how underwater noise is distributed over the North Sea.

If you picture the underwater environment to be a silent and serene world, you may have to reconsider. Sounds are omnipresent, also in the marine environment. Underwater sound can be produced by natural (waves, weather, animals) and anthropogenic (shipping, construction) sources. However, our understanding of the effects of these sounds on marine fauna is still limited. In recent years, the introduction of underwater sound in the marine environment started to receive political and scientific attention, and monitoring schemes are being set up. 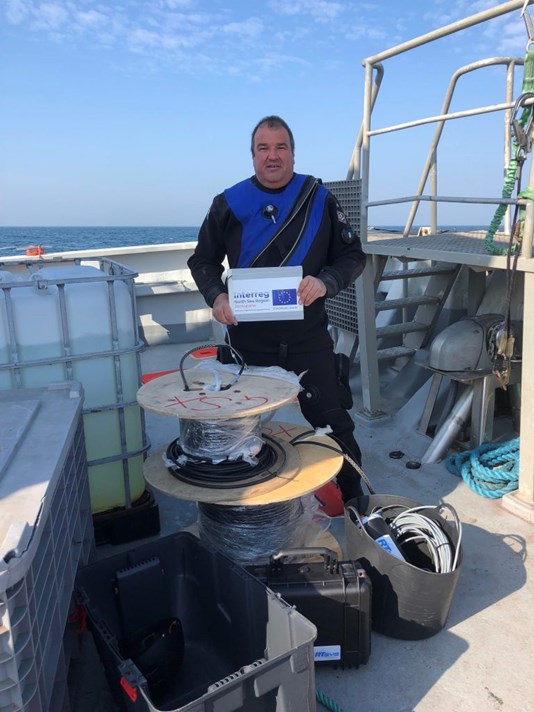 Scientific diver Alain Norro (RBINS/MARECO) during the preparation of the installation of the permanent acoustic recording station in the Belgian waters. © RBINS

Most of the monitoring effort however, is attributed to impulsive sound. This category of noise consists of sounds with a short duration (impulse-like), that are largely unwanted and of anthropogenic origin. Pile-driving for the construction of offshore wind turbines, sonars and the destruction of ammunition at sea are the best known sources of impulsive sound. These can potentially be harmful for marine fauna. A temporary relocation of Harbour porpoises Phocoena phocoena was already shown during pile-driving activities, and scientists have also gained some insight into the effects of impulsive sounds on fish. But to understand the full impact on these and other marine organisms, a lot more study is still needed. The growing knowledge is being translated into regulations. Belgian legislation for instance already prescribes that the level of anthropogenic impulsive sounds is not allowed to be higher than the level at which harmful effects can be shown. For pile-driving, the threshold is currently defined at 185 dB at 750 m of the sound source. Sound mitigation measures should be put in place when this limit is exceeded.

Our understanding of the levels and spatial and temporal patterns of continuous, ambient sounds in the marine environment on the other hand, is currently much less developed. These sounds – typically of low frequencies – may show an increasing trend due to the increase in human activities such as shipping, dredging, sand extraction, fishing and sustainable energy production at sea. Potential negative effects on marine fauna can be subtle and chronic and are therefore harder to evaluate. The limited amount of available data does not yet allow reporting to national and international policy makers.

As sound sources, sound transmission, and the distribution of vulnerable species are all transnational questions, these also should be tackled transnationally. The international reporting obligations of EU Member States for the Marine Strategy Framework Directive (MSFD) strongly pushes the development of a regional approach, both with respect to monitoring and methodology. Belgium effectively engaged to contribute to such an international approach and use the results for the national evaluation. To accomplish this, the Royal Belgian Institute of Natural Sciences (RBINS) joined the JOMOPANS project.

In this project, RBINS is (among other tasks) responsible for the installation of a permanent acoustic recording station in the Belgian part of the North Sea. The Westhinder platform was selected as a suitable location. Essentially serving as an automatic electronic light platform, the Westhinder now also plays an important role as node of the monitoring network of the Flemish Maritime and Coastal Services Agency. At the end of May 2019, the JOMOPANS sound recording station was added to this platform. Technicians from the Maritime and Coastal Services Agency and the RBINS scientific divers respectively took care of the aerial and underwater parts of the installation. The instrument will continuously monitor ambient underwater sound generated by both natural and anthropogenic sources. Check the illustrative video! 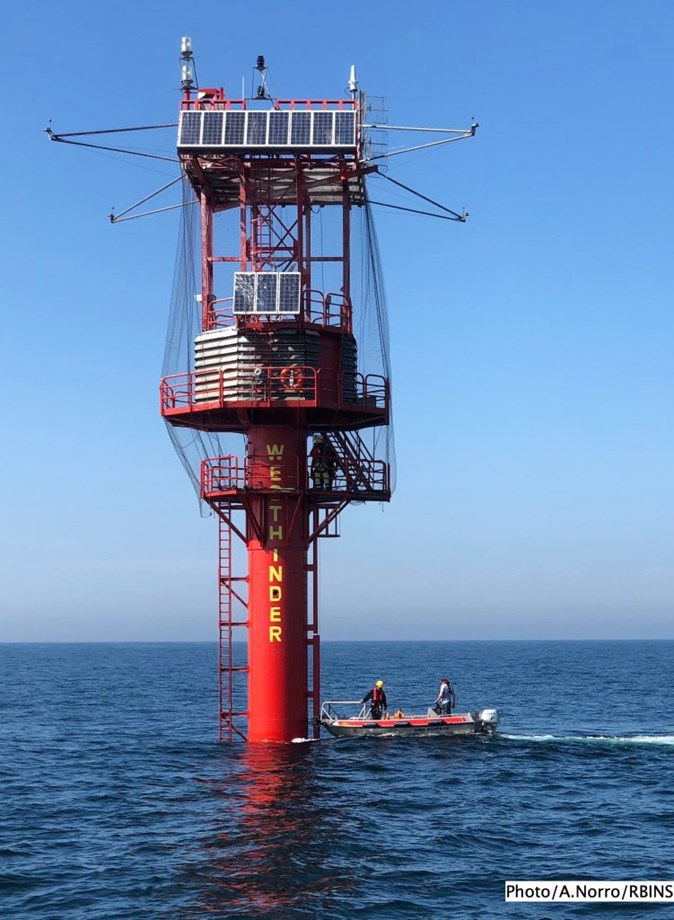 “The recently installed acoustic recording system will deliver the high-quality data that are needed to describe the types (level and frequency) and timing of sounds around the Belgian measuring station.” Says Alain Norro, scientific diver of RBINS. “In combination with data yielded by other JOMOPANS stations, we will begin to understand how underwater noise is distributed over the North Sea.” As such, the Belgian station will be an essential part of the network that will deliver the tools necessary for scientists and managers to incorporate ambient noise in their assessment of the environmental status of the North Sea. In a next step, the effectiveness of various options for reducing the potential environmental impact of ambient underwater noise in the North Sea basin, will be evaluated.