Edwin van Dijk, general manager at the offshore multiservices provider VDR in Anna Paulowna, the Netherlands, took a seven-hour drive to go to the Offshore B2B and Inn2POWER matchmaking event in Denmark in November.

There, Mr. van Dijk did met up with many representatives from interesting companies in the North Sea Region. One of them was Tjark Hulst from HICE; a cable equipment manufacturer from… the Netherlands!

“We have never met before but share some of the same customers. Now we know each other, we could make more of it once we are back in the Netherlands again”, says Tjark Hulst.

“Once a year I fly to Houston to a conference mainly to speak to other Dutch companies! So meeting up in Denmark is faster”, he said with a laugh. 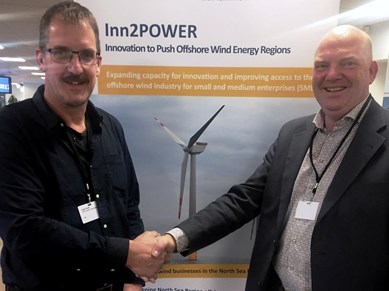