Successfull conference invited all sides together

20 November 2018 - Published by Ragni Leifson
The In For Care mid-term conference drew 69 participants from all parts of the quadruple helix: Academia, end-users, SMEs and the public sector. True to the project, the conference theme was informal care and voluntary assistance.

At the start of November, In For Care invited 69 participants for their mid-term conference in the city of Esbjerg in the south of Denmark. The host was In For Care partner UC Syd.

"We are very satisfied with the conference. The speakers were inspiring, and there were good discussions in the room. I learned something new, and I had a good feeling at the end", says Lone Oest at UC Syd. 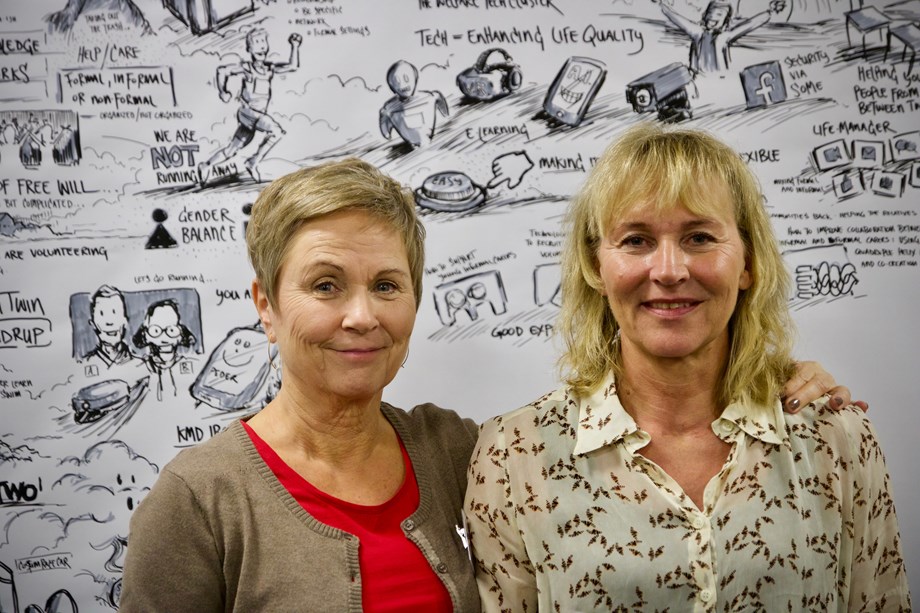 The underlying theme of the conference was quadruple helix, the collaboration between academia, end-users, businesses and the public sector. This was reflected in everything from the invitation to the name tags and the programme itself.

"We wanted to present speakers from the quadruple helix spectrum, which in turn opened up a discussion on informal care from different angles. It was especially important to us that the end-users were part of the conversation" says Vinie Diana Hvidbak Levisen at UC Syd.

A set of diverse speakers

Among the speakers were Ellen Verbakel from Radboud University, who gave a talk on informal caregiving and its well-being consequences from a cross-national perspective. Also on the podium was Helene Elisabeth Dam Jørgensen from the danish centre for voluntary work. Her theme was formal, non-formal and informal volunteering in the welfare sector in Denmark.

Levisen says that for her, the highlight was the presentation by Team Tvilling, Steen and Peder Mondrup, who overcame Peder's cerebral palsy to participate in Iron Man and several marathons.

"They had a personal story that really touched me. In the academic presentations we could discuss with our minds, this was all about reaching the heart as well", Levisen says.

Of the 69 participants, 38 were partners from the In For Care project. The rest were politicians, citizens and people from the welfare industry and volunteer sector.

One of the guests were Swedish politician Henrik Samuelsson, who had this to say about the conference:

Katrijn Raeymaekers, representing In For Care partner City of Turnhout in Belgium, attended the conference workshop creating a healthy balance between work, life and informal care:

Momentum in the project

Project leader Ragni Macqueen Leifson from the University of Agder in Norway was also pleased with the conference.

"It was a really good mid-term conference with a strong and engaging programme. It is important to get new perspectives, and I especially liked how all the parts of the quadruple helix had their say", Leifson says.

She is pleased with the momentum of the In For Care project, and in particular how the extent of the end-users involvement.

"We already have many new results, and it looks like we will be able to present new ways of working with informal care and voluntary assistance by the project's end", Leifson says.

She looks forward to inviting to the closing conference in the south of Norway in November 2019.