03 October 2017 - Published by Ragni Leifson
"Dugnad" is a peculiar Norwegian word for when the community comes together to do volunteer work. But there is little tradition for dugnad in the health services.

"The Norwegian welfare system has made informal care and voluntary assistance obsolete in many ways. There has been a stated policy that health and care work is the responsibility of the welfare state," says Elin Thygesen, associate professor at the Department of Health and Nursing Sciences at the University of Agder.

While mechanisms for involving family members and volunteers has been a significant and stabile part of Norwegian health care, it is only in the last decade it has become a national focus and a strategic priority for the Norwegian government.

There is a lot of volunteer work being done in Norway. There is even a word for it: Dugnad, which is when people come together to do volunteer work in their community.

"There is a booming activity and a lot of initiatives and good work being done in the volunteer sector", says Thygesen.

She mentions that many retirees spend some of their leisure time doing volunteer work, for example in schools.

At the same time, a lot of the larger volunteer organisations, like the Red Cross, are experiencing a decline in the recruiting of volunteers. While researchers aren't sure of the causes, it may stem from the increasing individualization of society.

"People are engaging more in activities related to their children or their own interests. We see more ad hoc volunteer work in connection for example to the refugee crisis. People don't want to commit to schedules and binding agreements. This wish for flexibility and freedom represents a big challenge for voluntary assistance in the health and care services, who are dependent on continuity," says Thygesen. 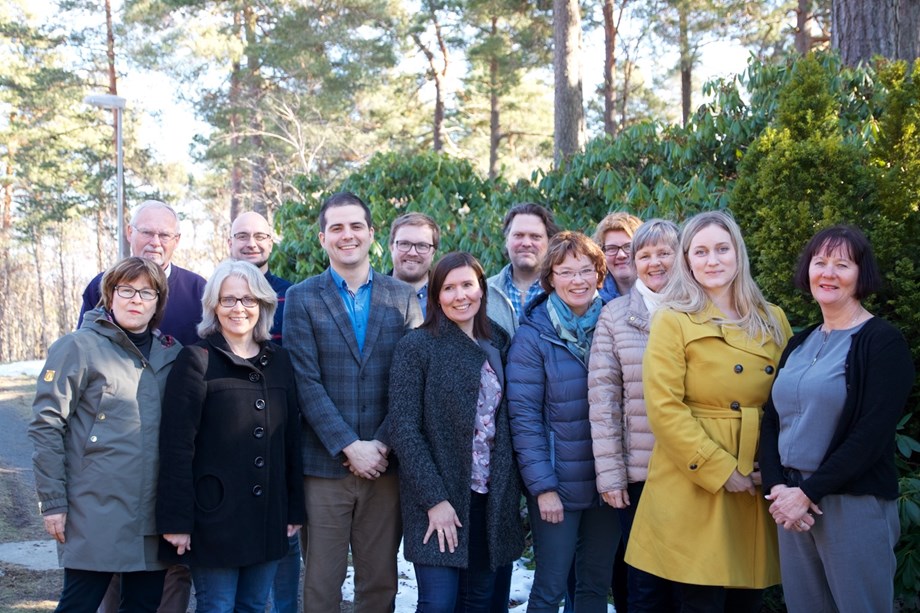 Participants from the University of Agder, Grimstad municipality, Knutepunkt Sørlandet and Frameworks (an SME) at the local kick off in March 2017.

In March 2017, In For Care arranged a kick-off for the local partners in the project. Among other things on the agenda, several municipalities presented their work with volunteers.

For several years, Grimstad municipality has had a group of volunteers working with the seriously ill. Their tasks aren't directly related to treatment, but simple things like having a conversation, help to make the patients comfortable, or to read to them.

"This has been very relieving for the relatives, who could take a break and not be tied up to the bed posts full time," says Åshild Berg Kaldestad from Grimstad municipality.

She says that the volunteers needed thourough training and good follow-up. It was also important that they had specific times when they should be with the patients, as consistency and dependency was key for the institution.

"For volunteer work to be a success, the volunteers need to be included in the staff so that they are taken care of and know what to do at any given time," Kaldestad says.

A report on informal care and voluntary assistance

In For Care is working on a report on informal care and voluntary assistance in Norway, Denmark, Sweden, Belgium, the Netherlands and Great Britain. The aim is to share information and learn from each other. The overall goal is to make the coordination of informal carers and volunteers easier.

"There are some questions that still aren't answered, like where the limits should be drawn between the tasks of volunteers and the tasks professional carers. It's important not to erase those boundaries," Elin Thygesen says.