The Tees is found on the north-east coast of England. It originates at Cross Fell in the Pennines, 893m above sea level. The river is 137 km long and drains an area of almost 2000km². The estuary borders the North Sea and covers an area of 171 acres.

The tidal limit of the Tees is determined by the Tees Barrage. This tidal barrage spans the entire river at Stockton on Tees. Completed in 1994, this has impounded the river and removed tidal influence upstream for 22 miles. The Tees Barrage was constructed to catalyse investment and economic recovery of the area following the industrial decline.

The Tees flows through a number of towns, some of the largest being situated around the lower Tees. 672500 people live in the Tees Valley, with 369600 living downstream of the Tees Barrage around Teesmouth. 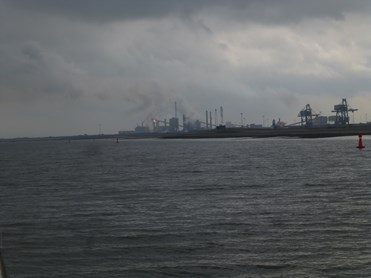 Teesport is based on the River Tees and is currently the third largest port in the United Kingdom, and amongst the ten biggest in Western Europe. The port handles over 56 million tonnes of goods per annum which are mainly associated with the local petrochemical, chemical and steel processing industries.

Teesside was once the heavy-metal powerhouse of the British Empire and at its height had 283 iron and steel works along its banks. A legacy of coal mining, shipbuilding and steel making provided a background for the development of an extensive chemical manufacturing industry during the 1900s.

Teesside industry is dominated by the commodity and in many instances, integrated chemical producers of the Northeast of England Process Industry Cluster (NEPIC). These are based on three large chemical sites around the mouth of the River Tees at Wilton, Billingham and Seal Sands. These companies make products such as petrochemicals, commodity chemicals, fertilizers and polymers.

Billingham kicked off the process industry in the 1920s with the creation of ICI, Wilton International sprang up in the 1940s, becoming the second largest petrochemical complex in Europe, and Seal Sands was developed in the 1960s - most are still going strong today. As the global economy changed, the Teesside industrial heart of Tees Valley reacted quickly; Tees Valley is now home to a growing fine and specialty chemical sector, a cluster of bio-industries and is at the cutting edge of renewable energy technology and deployment.

The Tees Valley has relatively high productivity rates across the production sector including particular strengths in the Process, Chemicals & Energy and Advanced Manufacturing sectors, providing employment for local people. Advanced manufacturing takes up a greater proportion of employment in the Tees Valley than the national average.

The Tees Estuary is designated as a European Marine Site and the coast as a Special Protected Area. This area is protected due to the mud and sandflat habitat that is key for many wading bird species.

The creation of a large RSPB reserve at Saltholme has encouraged growth of a wide range of migratory bird populations. Common Terns are known to use the Teesmouth area, with a breeding colony at RSPB Saltholme during the summer months.

Harbour seals used to be common around the Tees Estuary but were no longer present in 1870 following intensive industrialisation of Teesside. In the 1980’s seals began to return to the Tees estuary following improvements in water quality due to environmental improvement objectives set out in the 1960’s-70’s.

Maps of the Tees Estuary reveal a 93% loss of intertidal habitat between 1861 and 1993 from 2425 acres to 171. Areas of the estuary were reclaimed up to the 1970’s, creating new areas for industry. The estuary shape is therefore highly modified with

The channel has been straightened throughout much of the estuary to improve access for boats. The old channel of the River Tees can still be seen immediately downstream of the Tees Barrage, although it does not reconnect upstream at all.

Teesport is managed by PD Ports, who conduct hydrographic surveying of the riverbed to assess river depth throughout this 11km stretch of river. Data gathered from hydrographic surveys is used to inform dredging works that are completed periodically in Teesmouth. This enables navigation of large vessels into and out of Teesmouth.