The Scheldt originates at St. Quentin (France) and it is rain-fed by a catchment of approximately 21.863km², which is drained by the river and its branches to the sea. The river Scheldt is situated in the northeast of France (31%), the west of Belgium (Flanders, 61%), and the southwest of The Netherlands (8%). The 355 km long river can be divided into the non-tidal Upper Scheldt and the tidally influenced part which extends from the sluices at Gent until the mouth at Vlissingen (160 km). The lower and middle estuary is located in the Netherlands and is called the Western Scheldt. From the Dutch/Belgian border the estuary is called Sea Scheldt which is further divided into the Lower Sea Scheldt, stretching from the border until Antwerp, and the Upper Sea Scheldt, stretching from Antwerp to the upstream boundary at Gent. Three main rivers join the Scheldt: the Dender, the Durme, and the Rupel. Within the Rupel, also inputs from sub-tributaries the Zenne, Dijle and Nete are gathered. The Canal Gent- Terneuzen connects with the Scheldt in the saline part of the Western Scheldt. Most of the river basin area is urban; the total population of the catchment numbers more than 10 million people, with an average density of 477 inhabitants km2. 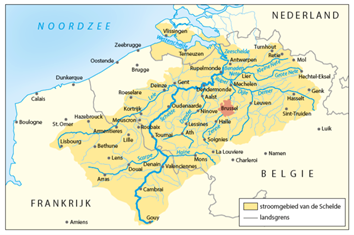 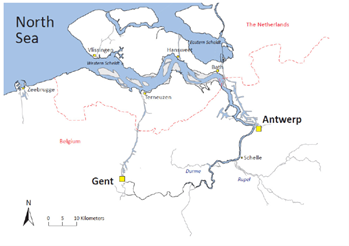 Since the early middle ages tidal marshes of the Scheldt were claimed for agricultural areas. In order to protect themselves against storm surges people built the first dykes in the 10th century. Between the 14th and 16th century several severe floods occurred which influenced the appearance of the delta of the Scheldt. Since the 16th century major land claims have been carried out. The importance of the Scheldt for shipping purposes increased in the 19th century which led to several deepenings of the estuary. Since the middle of the 20th century major industrial and urban developments took place. About 16% of the total surface of the whole estuary was lost in the last century (Meire et al. 2005); and especially the surface of the Westerscheldt decreased from 45.000 ha in 1800 to actual 30.000 ha and the river became 10,5km shorter. The evolution of habitats in the Westerscheldt shows two different trends: a decrease of low dynamic areas such as mud flats and shallow water, and an increase of high dynamic areas, e.g. deep water and sand flats. However, a severe storm surge in 1953 with over 1800 casualties in the Netherlands led to the setup of the Dutch Deltaplan and the Belgian Sigma Plan which should prevent further floodings. The latter resulted in the construction of several flood control areas in Belgium.

The Scheldt is a macro-tidal and relatively turbid estuary. Mean depth varies from about 14 m at the mouth to 7 m near Gent. The Westerscheldt is a well-mixed and characterised by a complex morphology with flood and ebb channels surrounding several large intertidal mud and sand flats (Van Damme et al. 2005), but the upper estuary (Belgian part) forms a more narrow, single tidal channel and may be slightly stratified during high peak discharges. As a result of tidal asymmetry, sediments accumulate in the upstream part of the Scheldt, as more sediment is transported upstream at high tide than is exported at low tide. The crosssectional area increases smoothly from the river to the mouth giving the estuary a funnel shape.

Water quality was moderate to bad - a result of the discharge of untreated domestic wastewater, industrial pollution with heavy metals and organic micropollutants and extensive nutrient load from agricultural sources. However major improvements have occurred in recent years. Since 1996 the water treatment of household effluents changed, significantly reducing phosphorus loads (Van Damme et al. 2005, Soetaert et al. 2005). Since 2007, water from the Zenne, entering the Scheldt estuary via the Rupel which carries the wastewater from the densely populated Brussels region, was treated (corresponding to 1 million inhabitants) (Aquiris 2010). Water quality and the concentrations of dissolved oxygen improved due to the treatment of waste water, for example the freshwater Scheldt has rapidly recovered from hypereutrophication, and has increasingly become autotrophic (Cox et al. 2009). A peak of primary production can be observed in summer and autumn. In 2015 oxygen concentrations did not drop below 5 mg/l anymore along the whole estuarine gradient. Nevertheless, a deficiency in the oligohaline zone persists.

The Dutch Westerscheldt as well as the Sea Scheldt in Belgium function as an important area for water birds, migrating fish species, porpoises and diverse habitat types (Natura 2000 Integrated management plan Westerscheldt & Saeftinghe, in press). The Scheldt is of international importance especially for 21 water birds species, but in general the 1% norm of the RAMSAR convention is exceeded in all months of a year (van den Bergh et al. 2005, in Meire et al. 2005). Therefore large parts of the Scheldt estuary are designated as RAMSAR sites and SPAs or SACs under the EU legislation, i.e. the Habitat and Bird Directives (92/43/EEC and 2009/147/EC). In 2015 most of the breeding birds (of the Habitat and Bird Directives) didn’t evoluate very well in the Western Scheldt. Their numbers are decreasing compared to the situation before 2010. The non-breeding birds depending for their food on the soil fauna show also a decrease as well as the Gray Goose. However a few species do show an improvement (T2015). As well as the other estuaries the Scheldt estuary is designed as heavily modified water body (HMWB) according to the Water Framework Directive.

The catchment of the Scheldt is mostly urban with intense industrial activity. Shipping and nature are considered as the most important functions (Natura 2000 Integrated management plan Westerscheldt & Saeftinghe, in press). The port of Antwerp plays a significant role. In 2017 the volume of maritime freight handled in Antwerp amounted to 214.2 million tons. The port counts for about 60.500 (2014) direct and 82.000 (2014) indirect jobs (www.portofantwerp.com). Further ports are located at Gent (Belgium), Terneuzen and Vlissingen (The Netherlands).

Industry and power plants are located near the ports of Antwerp, Gent and Vlissingen (Van der Zee et al. 2007). Together with industrial plants they extract water for cooling purposes and other uses. In the Westerscheldt also sand extraction takes place. Besides industry agriculture, i.e. stock farming, crop and fruit-growing, plays an important economic role in the provinces along the Scheldt estuary, Flanders (Belgium) and Zeeland (The Netherlands).