The Göta Älv (Göta River) is the largest river in Sweden with an average discharge of 575 m3/s and maximum discharge of 1,000 m3/s. Its total length from source to sea is 731 km. It also has the largest catchment area in Scandinavia of 50229 km2 in Sweden and Norway. The catchment area starts from a small creek in the north of Sweden, passes Norway and grows into a river before reaching Sweden’s biggest lake Vänern. The river is called Göta Älv from the Vänern’s outlet at Vänersborg to the river outlet into the sea at Gothenburg. The Göta Älv runs through a 93 km long valley with a surrounding catchment area of 850 m2 and more than 20 inflowing streams. The river is part of a mostly inland waterway, Göta Canal, which spans the width of Sweden to the Baltic Sea south of Stockholm. At the city of Kungälv the river is divided into two parts around Hisingen island. The northern part is called Nordre älv with two third of the river flow, and the southern part runs through Gothenburg, i.e. the Göta Älv (River) estuary. The population in the catchment area downstream of Lake Vänern is around one million and the Göta Älv is the primary drinking water source for about 700,000 people. Around 1000 ships and 3000 leisure boats pass the river every year. 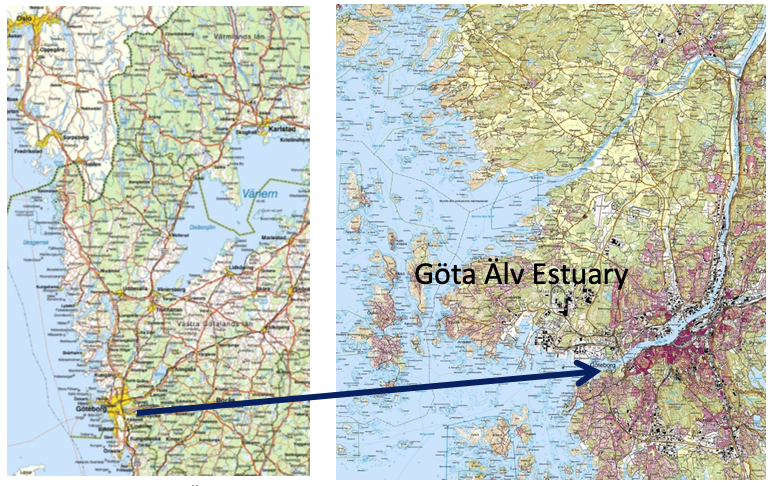 The Göta Älv has been considered to be a very important communication link for the transportation of people, goods and ideas between coast and inland since prehistoric times. The role of the river grew in importance during the Iron Age and its control became of great strategic importance. The oldest archaeological finds at the Göta Älv related to shipping is the Äskekärr ship, a cargo Viking ship dated to the 930s. The river is often mentioned in the Icelandic fairy tales as a means of communication, as well as a starting point for Viking tours to the west and south. Before the Treaty of Roskilde in 1658, a stretch of the river constituted a national border between Norway and Sweden. The history of Gothenburg begins with the foundation of the heavily fortified town in 1621. The location of the new trading port, Sweden's only direct access to the North Sea and Atlantic, was highly strategic. The Swedish East India Company was founded in Gothenburg in 1731 for conducting trade with China and the Far East. This made Gothenburg a European centre of trade in eastern products. 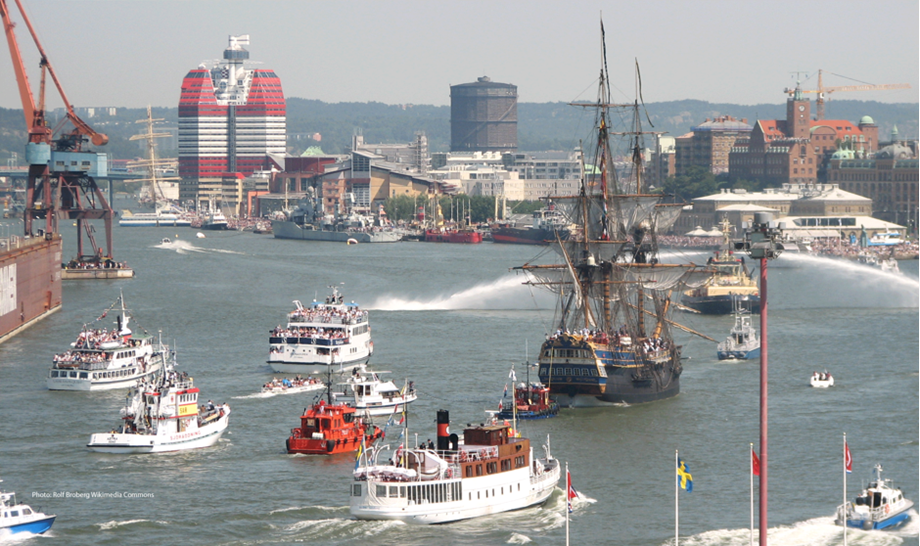 Figure 2. The inner harbor of Gothenburg when the sailing replica Göthenborg returned from China.

The bedrock of the Göta Älv valley is dominated by gneiss with elements of diabase and granite. The valley is a distinct fracture valley with both well-trained and irregular valley pages. The valley ravine landscape has been formed through water erosion, race and landslides. The valley is bounded by barren mountains that travel about 100 meters above the valley floor. The Göta Älv estuaries are characterized by low-lying areas with deep clay deposits, at some places over 100 meters, which overlays friction soil and rock. Layers of silt and sand in the clay layers are common. The clays are mainly glacial and post glacial deposits. In the northern part of the valley the river has cut deep into the soil layers and formed steep and high beach slopes. In the southern part of the valley there are steep underwater slopes and flood areas. Along the coastlines in the Göta Älv estuary there are also fillings and the western parts are dominated by rocks. The annual transport of sediment in the Göta Älv has been calculated to 130,000-200,000 tonnes annually.

The Göta Älv and its catchment area show high species richness and great opportunities for nature experiences. The valley has a mosaic of habitats with irregular valley sides and steep beach slopes with forest above the river valley. Many rare species live in the area, and even seals can be seen in height with Lilla Edet ~50 km upstream Gothenburg. Several areas at the Göta Älv and in the catchment area are included in the EU Natura network 2000, with the aim of preventing the reduction of biodiversity. The estuary of the Nordre River is for Sweden a unique area that is protected both by Natura 2000 network and the Wetland Convention.

The Göta Älv valley and the city of Gothenburg have a long history of anthropogenic activities such as settlements, shipping, harbours, industry, activities and infrastructure including large roads and railroads. The river is used by many different actors with various interests. The archipelago is highly populated with commuter ferries and leisure boats, and in summer season the population is increased due to tourism. The Port of Gothenburg, Scandinavia's largest and most important port, is located in the Göta Älv Estuary. The Port has over 11,000 ship visits per year from over 140 locations worldwide. It is the only Swedish port with the capacity to cope with the very largest modern, ocean-going container ships, and therefore Gothenburg handles nearly 30 % of the country's foreign trade, comprising 39 million tonnes of freight per year. The port has 13.1 km of docks situated on both sides of the estuary of Göta Älv.

Figure 3. The Port of Gothenburg.

The Göta Älv has been used as a water source since the late 1800s. Levels of environmentally polluted substances analysed in the water meet the drinking water requirements, but the contamination of faeces is a continued threat to the Göta Älv as a raw water source, and the impact is still high. The Göta River is classified as heavily modified water and the ecological potential classified as unsatisfactory where the hydrology, regulations of the water flow is decisive.

Already today flooding occurs with mainly material damages and infrastructure failures. The infrastructure damages have had some serious impacts such as "knock out" of the regions SOS alarm central, which was not manageable because of its flooded computer and IT-system central. Also, the storm and sewage water systems have difficulties functioning under flood and storm events. Under such events the pollutant load to the Göta Älv estuary is increased due to the first flush not passing the water treatment plant and that the contaminated land upstream, highly polluted roads and urban areas are flooded. In the area, flood events are caused both by high precipitation and high sea water levels.

Based on the latest IPCC report and previous estimates from SMHI the sea level might increase by one meter until year 2100. One proposal to reduce the probability of flooding in the central parts of Gothenburg is to build barriers in Göta Älv. Both the sea level rise alone, increased extreme weather events and measures taken to reduce the risk may have a non-wanted impact. Increased precipitation will increase the contamination load in the Göta Älv estuary unless the capacity of the stormwater system and the water treatment plant is increased.

There are major infrastructural activities in progress that will affect the estuary such as the infrastructure project West Link (Västlänken) with several tunneling projects involving great excavations, and also discussions about expanding port activities.

There are major infrastructural activities in progress that will affect the estuary such as the infrastructure project West Link (Västlänken) with several tunneling projects involving great excavations, and also discussions about expanding port activities. This website and the video below provide an overview of urban development projects in Gothenburg.

Organotin compounds (OTs) have been used in a range of applications since the 1920s, reaching a maximum production of 50 000 tons/year in 1996. Tributyltin (TBT)-containing paints were banned on all Swedish ships beside ocean-going vessels in 1993, however, large amounts of OTs remain in the environment, especially in harbor sediments. TBT concentrations of 0.01-10 µg/g have been reported on the Swedish West Coast, with the highest concentrations at Gothenburg harbor. Emissions from antifouling is also an important source of microplastics in marine sediment; wear from leisure boat only (ships unknown) gives up to 740 tons of microplastic annually.Another important source of pollution to the marine sediment is the urban runoff containing metals, organic pollutants and microplastics. High concentrations of particles, microplastics, metals and POP, are frequently found in runoff from traffic environments. The PAH-16, some of which are carcinogenic, were detected in total concentrations up to 21 mg/kg in stormwater sediment in Gothenburg. Urban sediments may also carry high concentrations of Cu up to 500 mg/kg, and Zn as high as 1000 mg/kg. The antifouling paints used today are an environmental risk because they contain Cu2O as biocide and ZnO to control the erosion rate. It is therefore likely that concentrations of Cu and Zn in marine sediments will increase depending on the growing use of antifouling, but also depending on the increasing inflow from urban runoff.

In the Port of Gothenburg an entirely new terminal will be constructed of contaminated sediments stabilized by adding binders consisting of cement and granulated blast furnace slag. The area is 220 000 m2 in size and has a maximum water depth of 10 m. The concentrations of TBT are high in the sediments. The permit for the construction works and stabilization of the sediments contains specific conditions regarding TBT leaching from the construction. Therefore, finding the optimal binder recipe is crucial and has been done in steps. The first step has included laboratory tests and evaluation of geotechnical properties and leaching of contaminants. In the next step, a field pilot-test was performed. Approximately 10 000 m³ of contaminated sediments was stabilized and placed behind an embankment. Environmental and geotechnical properties is been monitored according to a monitoring programme.